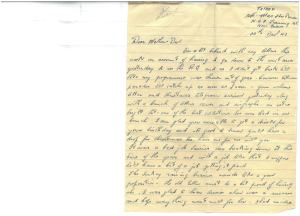 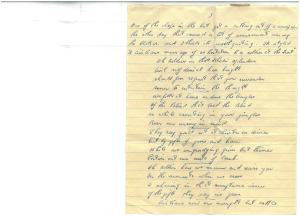 I’m a bit behind with my letters this week on account of having to go down to the unit area yesterday to see the RQ and as I didn’t get back till later my programme was thrown out of gear.  However between parades I’ll catch up as soon as I can.  Your welcome letter and Christmas telegram arrived yesterday along with a bunch of letters, cards and air graphs – an extra bright lot – one of the best collections I’ve ever had in one bunch.  I am glad you were able to get a drink for your birthday and its good to know you’ll have a drop for Christmas too.  Have one for me, will you.

It was a bad job Laurie’s car breaking down at this time of the year and with a job like that I suppose he’ll have a bit of a job getting it fixed.  The turkey raising business sounds like a good proposition.  The old gobbler must be a bit proud of himself, eh.  I was glad to hear Anne’s show was a success and hope everything went well for her.  I had no idea it was a big show she was in – she’s certainly stepping along, isn’t she?

I wrote to Jim last week and will try and drop him a line in the Christmas weekend and send your message on to him as I know he’ll be pleased to hear from you.  Old Pluto (Peter McCowan) and Bull Black are back with the bug and they told me Jim had got back to the mob just before they left – as fat as a seal.  The high living he mentioned at the transit camp must have agreed with him.  Peter and Bull had both got very thin but didn’t look too bad.  They knew all the latest Griffin.  Jonesy – our old Lieut – has caught up again and got the mob together.  He was a great fellow Jonesy and could handle the mob better than anyone we’d had.

Among my letters yesterday were two air graphs – a special Christmas greeting variety – one from Wedd and one from Mrs Laird.  I think I’ll enclose them in this letter.  Youngster’s letters this week have been very cheery and she seems to be enjoying her stay in Sydney and is still very hopeful of Bill getting down early in the New Year.

One of the chaps in the hut got a cutting out of a newspaper the other day that caused a lot of amusement among the blokes and I think it’s worth quoting.  It’s styled ‘A civilian’s message of exhortation to a soldier at the front’:

Oh soldier in that khaki splendour

Civil self denial has brought

Should foes request that you surrender

Scorn to entertain the thought.

We folk at home endure the bungles

Of the blind that lead the blind

So while cavorting in your jungles

Bear our misery in mind.

Girt by gifts of geese and ham

While we ungrudging, grim but thinner

Portion out our mite of lamb.

Oh soldier how we mourn and miss you

In the moments when we crave

A sharing in that sumptuous issue

Of the gifts they say we gave.

Civilians now are nought but cattle

Oh soldier in your next big battle

Strive to make it worth our while.

Not a bad effort, is it?  I guess the bloke who wrote it has been reading Pix and the Woman’s Weekly.

Things are going along quite pleasantly here.  We’re being kept very busy but get our share of fun out of it and as we’re living extra well – fresh meat three or four times a week – we haven’t much to complain about, all things considered.

Must say cheerio now Mother and Dad.  Give my love to May, Anne & Carline and best wishes to the troops for Christmas and the New Year.

PS  I see in the local rag that the unions are having a bit of a lick at Tom D’Alton.

‘Airgraphs’ were la means of distributing mail by air, via the intermediary of microfilm.   The history of the process and its introduction for UK servicemen is described here  https://alphabetilately.org/airgraph.html     ….    and an announcement detailing the start of the service in Australia in July 1943 is reported here https://trove.nla.gov.au/newspaper/article/75135665.

Essentially, letters were written on a specific form available from Post Offices.   After arriving at the originating country’s central processing place (Melbourne, for Australia) the letters were sorted for destination, photographed and then dispatched in the form of microfilm (one roll holding 45,000 letters) and flown to the recipient country where they were printed on paper rolls and cut into individual pages, a quarter the size of the original.  Each letter was then folded

and sealed into a special envelope, with the addressee’s name and address visible through the space provided.

Images at left : Envelope containing the letter from the Laird family addressed to Dad – with the address changed (presumably at Field HQ) to indicate his whereabouts.  This is the only written confirmation of the specific ‘school’ he was attending.

Thank you so much for your letter.  It was good to hear from you again.  I hear from your friend Wedd.  All here well and trust you are the same.  Will be having a very quiet Hew Year.  Wish you were here to help make the party merry.  Wishing you all the best Max.  Love from us all at 39.  J. Laird.

The Lairds were the family with whom Dad and his friend Graeme Watts had spent New Year’s Eve/ New Year’s Day 1940/41.  (See post dated 11 January 1941)  This is one of several letters from Mrs Laird and their daughter Billie that Dad kept with his wartime correspondence.

Greetings for Xmas & New Year to you lads who are fighting such a great battle.  All the lads are with me with these greetings & we’ll truly enjoy a ‘conference’ with you boys when we have finished our war in this part of the world.+++  I’ve written you air mail in reply to yours of 22nd Sept & will be posting it this coming week. +++ Winter is coming upon us, & flying is not as good as a while ago.  I can tell you now that I’ve been with the Path Finder Force since March.  Greetings till be meet, Hickey.  RH Wedd.

The Pathfinders were target-marking squadrons in RAF Bomber Command during World War II. They located and marked targets with flares, which a main bomber force could aim at, increasing the accuracy of their bombing….The early Pathfinder Force (PFF) squadrons was expanded to become a group, No. 8 (Pathfinder Force) Group in January 1943…The proportion of Pathfinder aircraft to Main Force bombers could vary according to the difficulty and location of the target; 1 to 15 was common, though it could be as low as 1 to 3. …  Over the course of its history the Pathfinder Force flew a total of 50,490 sorties against some 3,440 targets. At least 3,727 members were killed on operations.  (https://en.wikipedia.org/wiki/Pathfinder_(RAF))

By a sad coincidence, on the day Dad was writing this letter, Rex Wedd’s plane was shot down over Germany.

This entry was posted in Letters to/ from others and tagged airgraphs, Rex Wedd. Bookmark the permalink.