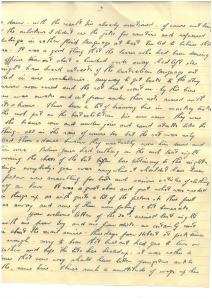 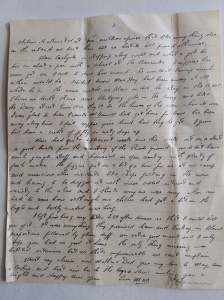 The big day of the year is here again and I hope you’re enjoying it to the full though I suppose it will be a quiet day for you but you’ll probably get a measure of pleasure from Anne and Carline’s appreciation of the occasion.  I meant to ask you to give them each a pound for me, but forgot it so give it to them for the new year will you?

The day has started very promisingly here and hope it continues that way.  It’s a glorious day and an atmosphere of pleasantness obtains.  The church parade has finished and whilst a little sing song is going on in the next hut, the chaps in this hut are reminiscing on other Christmases spent in various conditions all over the world.  Some quite interesting stories among them – what some chaps lack in experience they make up in imagination, but between them it’s a good story.

An incident or series of incidents last night put the mob in a happy mood – most of the story revolved around a rat.  Expecting the usual procedure of lights out at 10.30 we crawled under the nets a little before that and I was nicely asleep when awakened in a split second by an impact that felt like a ton of bricks and a concussion like a bomb dropping close by.  It was Ted Alexander – a six foot two Queenslander who had crashed with a rail through my net.  It seems that about half past eleven someone espied a rat or heard his hobnails on one of the rafters so Ted who is practically allergic to rats jumped out from under his net, grabbed his bayonet and prepared to go to town, and it was while climbing along a rafter that the accident happened.  The white ants had eaten through the rafter and when Ted got his weight on, the whole works came down – with the result I’ve already mentioned.  Of course, not being one of the onlookers I didn’t see the joke for some time and expressed my feelings in rather florid language – at least I’m led to believe that was so.  It was a good thing that the lasses who had been dancing at an officers’ turnout about a hundred years away had left, else they might have heard extracts of the Australian language not included in nice vocabularies.  Anyway to get back to the story – the tension soon eased and the rat hunt went on.  By this time everyone was awake and out from under their nets, armed with bayonets & brooms.  There’s been a bit of training here in monkey tricks and the mob put on the best exhibition I’ve ever seen.  They were along the beams over and under joists and round struts like the real thing – all in the raw of course too, but the rat was wily and lead them a dance.  However they eventually wore him down and did him over.  Bolivar Jones had nothing on the mob last night.  This morning the chaos of the hut bore testimony to the night’s proceedings:  every-body’s gear was everywhere it shouldn’t have been and fellows were scrambling for boots and various articles of clothing for half an hour.  It was a great show and just what was needed to liven things up as with quite a lot of the fellows it’s their first Christmas away and some of them were feeling a bit homesick.

Your welcome letter of the 20th arrived last night along with one from Ivy and one from Mick.  One certainly can’t complain about the mail service.  Three days from Hobart at peak times is fair enough.  Sorry to hear that bull ant had gone to town on you Mother and hope the bite has healed up.  It was rather a coincidence that some wog should have bitten Youngster’s ankle about the same time.  There’s such a multitude of wogs up here – I believe it’s estimated at two million species – that like everything else on the island, we treat them all as hostile till proved otherwise.

Alan Carlysle is stepping along well and what a job too – he’s on about a par with a Colonel at the Barracks.  I suppose he’s even got an AWA to drive him around.  He wouldn’t lairize much either, would he.  I didn’t know Max Hay had been away at all.  What’s he in – the same racket as Alan or did he stay in the AMC?  There’s no doubt there’s some bludging jobs in the Army and like the Davey Street Guerrillas they’ll be the heroes of the war when it’s over.  I was glad to hear Frank McDonnell had got home for leave – he’s been away a long time.  I don’t suppose you’ve heard how long he got.  I guess he’d have a credit of fifty or sixty days up.

We’ve had quite a pleasant time this week – out on a stunt – a good break from the monotony of the parade ground – we didn’t have much jungle stuff and bivouacked in open country with plenty of fresh water.  The Fuzzies put on a bit of a turn for us at one camp and numerous other incidents like chaps falling in the rivers and having to be dragged out with vines added interest and variety to the show and I think everyone was sorry when we had to come home although our clothes had got a bit on the bugle and badly needed washing.

I left finishing my letter till after dinner so that I could tell you of it.  It was everything they promised – ham and turkey in liberal proportions followed by plum duff – an extra good meal and I only hope you had as good at home.  The only thing missing was bottled vitamins but as that’s unprocurable we can’t complain.

Must say cheerio now Mother & Dad.  Give my love to May, Anne & Carline and best wishes to the boys & here’s wishing you a bright and happy New Year. 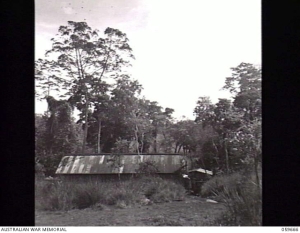 This may be a reference to ‘cowboy and stuntman’ Buck Jones who had appeared in many American movies.

This would be a reference to Army personnel based at Anglesea Barracks in Hobart.

Dad wasn’t part of this school, but no doubt ‘PT parades’ were a feature of his schedule as well. 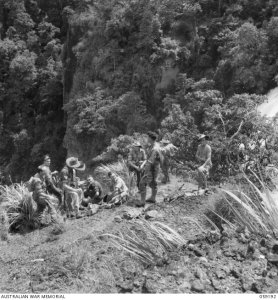 The Fuzzies put on a bit of a turn

Natives of the Mekeo tribe performing one of their traditional dances during the Christmas celebrations at the ANGAU transit camp.  25 . 12 . 43

The Battalion ‘around Shaggy Ridge’

Extracts from The Footsoldiers (p369):

…work parties were the order of the day and continued up until Christmas Day 1943.  This was a total rest day and half the unit was permitted to attend the gymkhana back near Dumpu.  The Christmas fare was the traditional turkeys and baked potatoes with fresh vegetables and fruit….. 4th Squadron dropped us cigarettes, tobacco and newspapers, and that night a mobile cinema came to the unit lines.  The show was not interrupted when Jap bombers flew over and passed down the valley.  On the 26th the work routine began again with 100 men marching up to the diggings…. On the 27th the historic 2/16th Battalion assault on Shaggy Ridge took place…

Their mail also got through

This entry was posted in escapades, relaxation, fun and games, Food and Drink, Papua New Guinea, Posts and telegraph, training. Bookmark the permalink.