On Sundays, thoughts go to family, friends, beer and tobacco. 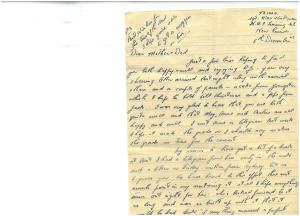 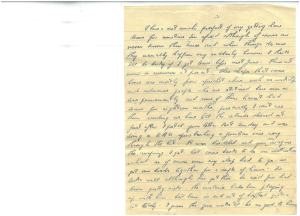 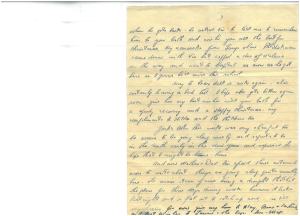 Just a few lines hoping to find you happy & well, and enjoying life.  Your very cheering letter arrived last night along with several others and a couple of parcels – a cake from youngster which I hope to hold till Christmas and a pipe from Jack.  I was very glad to hear that you are both quite well and that May, Anne and Carline are all happy and well.  I sent Anne a telegram last week.  I hope it made the grade or I should say makes the grade in time for the concert.

Ivy seems to have got a bit of a break at last.  I had a telegram  from her early in the week and a letter on Friday, written from Sydney but as I guess you too have heard to this effect there’s not much point in my mentioning it.  Still I hope everything turns out right for her.  She’s looked forward to it so long and was so built up with it that it would be had luck if anything marred a perfect holiday.

There’s not much prospect of my getting home leave for some time I’m afraid although of course one never knows these times and when things do move they usually happen very suddenly.  However I think I’ll be lucky if I get leave before next June.  There’s not even a rumour at present.  Those chaps that came home are mostly from specialist shows such as workshops and ordinance people who are stationed here more or less permanently and some of them haven’t had leave for eighteen months.  Personally I can’t see them sending us home till the island’s cleaned out.  Just after I posted your letter last Sunday and was doing a little spine bashing a familiar voice rang through the hut – it was Viv Abel and you can imagine the surprise I got .  He’d come back to do an instructors school so of course even my sleep had to go – we got our heads together for a couple of hours.  Viv looks well although he’s got thin.  He said Jim had been pretty sick – the malaria had been playing up with him.  He’d been in and out of hospital quite a lot lately.  I guess the Zinc Works’ll be no good to him when he gets back.  He asked Viv to tell me to remember him to you both and wish you all the best for Christmas.  My namesake from Tiny’s show, Pat Hickman, came down with Viv but copped a dose fo malaria on the way and went to hospital as soon as he got here so I guess he’ll miss this school.

Sorry to hear Nell is sick again.  She’s certainly having a bad trot.  I hope she gets better again soon – give her my best wishes will you, both for a speedy recovery and a Happy Christmas.  My compliments to Hilda and the children too.

Jack’s letter this week was very cheerful too.  He seems to be going along nicely and expects to be in the south early in the New Year and expressed the hope that I might be home.

And now Mother & Dad I’m afraid there’s not much more to write about.  Things are going along quite smoothly here  The main item of news being a drought that hit the place for three days during the week.  However it broke last night and is flat out to catch up now, so I’ll say cheerio for now.  Give my love to May, Anne & Carline and best wishes to Laurie & the boys.  Love – Max.

PS (diagonally at the top of the letter):

Best wishes for the twelfth dad.  I hope you’re able to get a noggin or two.

Friends and a namesake

Viv Abel (TX797) and Jim McDonnell (TX 1024) had been together in the carrier platoon since the formation of the Battalion in England in 1940.  They travelled to England on the Queen Mary (HMT X1) as part of the 1st Anti-Tank Regiment, and when re-organisation occurred in June 1940, they became members of the 72nd Battalion, the forerunner of the 2/33rd.

Jack was Jack Chandler, a teacher (later superintendent) at Ashley Boys Home in Deloraine, where juvenile offenders aged 8 – 18 were housed and educated.  He had not been permitted to enlist. 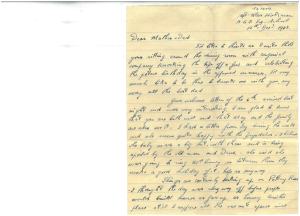 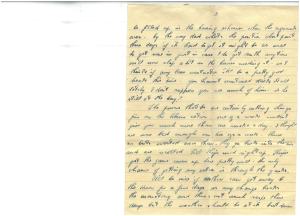 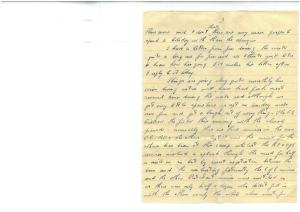 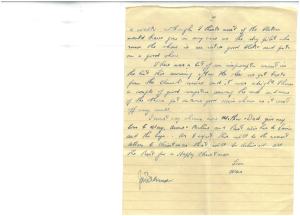 I’d like to think as I write that you’re sitting around the dining room with congenial company knocking the tops off a few and celebrating the pater’s birthday in the approved manner.  I’d very much like to be there to knock one with you anyway, all the best dad.

Your welcome letter of the 6th arrived last night and was very interesting.  I am glad to know that you are both well and that May and the family are also well.  I had a letter from Ivy during the week and she seems quite happy with the Drysdales.  I believe the baby made a big hit with them and is being spoiled by the old man and Drew.  She said she was going to ring Mrs Toomey so between them they make a good holiday of it – hope so anyway.

Things are certainly looking up on Pottery Road.  I thought the day was a long way off before people would build houses as far up as Tommy Smith’s place.  Still I suppose all the vacant spaces will be filled up in the housing schemes when the argument’s over.  By the way dad,  what’s the position about paint these days?  If it’s hard to get it might be as well to get some in just in case I do get south any time.  We’ll soon slap a bit on the houses needing it as I think if any lease eventuates it’ll be a pretty good break this time.  You haven’t mentioned Mick at all lately.  I don’t suppose you see much of him.  Is he still at the Bay?

The powers that be are certainly cutting things fine on the tobacco ration – one oz a week wouldn’t give you much more than one smoke a day.  I thought we were bad enough on two oz a week.  There’s no butts wasted even then – they go back into the tins and are re-rolled till they’re used right up.  They’ve got the game sewn up here pretty well – the only chance of getting any extra is through the Yanks.

It’ll be nice if Mother can get away to the Huon for a few days as any change breaks the monotony and there’s not much scope these days but the weather should be at its best down there now and I don’t think there are any nicer people to spend a holiday with than the Menzie’s.

I had a letter from Jim during the week – quite a long one for Jim and as I think you’d like to hear how he’s going I’ll enclose his letter after I reply to it today.

Things are going along quite smoothly here.  We’re living extra well, have had fresh meat several times during the week and although we get very little spare time except on Sunday, make our fun and get a laugh out of everything.  The CI tricked the field this morning with the church parade – normally there are three services in the area, C.E., R.C., & the others – up till now the service for the others has been at this camp whilst the RC & C of E services involved a splash through the mud for half a mile or so, but by secret negotiation between the boss and the sin-busting fraternity the C of E services and the other Protestant service were switched.  So as there were only half a dozen who didn’t fall in with the others, nearly the whole show went for a walk – although I think most of the blokes would have gone in any case as the sky pilot who runs the show is an extra good bloke and puts on a good show.

There was a bit of an impromptu concert in the hut this morning after we got back from the church service and it was alright.  There’s a couple of good songsters among the mob and some of the others put on some good comic shows so it went off very well.

I must say cheerio now Mother & Dad.  Give my love to May, Anne & Carline and Best Wishes to Laurie and the boys.  As I expect this will be the nearest letter to Christmas that will be delivered – All the Best for a Happy Christmas.

Family and friends, events at home

At the end of November Dad’s sister Ivy had finally managed to secure a seat on a flight to Sydney- her husband Bill Drysdale’s home town – and was staying with her mother in law, and planning to catch up with her friend Mrs Toomey.  Her baby son – at that time also called Max, but later changed to his father’s name (Bill) – was clearly going to be the centre of his grandmother’s attention.  Bill (snr)’s brother Drew was apparently an attentive uncle.

Pottery Road is where Dad’s parents lived.  It was one of the main roads in Lenah Valley, with most of the land on either side devoted to orchards.  it was possible to walk from the top of the road via McRobie’s Gully, to the Cascade Brewery in South Hobart.

Getting hold of some paint….  It seems Dad’s father had investment properties which Dad helped maintain.  ‘Mick’ was Mick Mason, also mentioned in other letters as being involved in the building trade.

Ben Menzie and his family – apple orchardists in the Huon – were also mentioned in other letters.  I know that as an adult Ben’s daughter Susan still referred to dad as ‘Uncle Max’.

Tobacco was rationed during World War 2 by limiting production. Retailers were supplied on the basis of quotas. From mid-1942 quotas were reduced by 25% with a further 5% reduction in late 1943. A heavy smoker would try to get himself placed on a ‘list’ with a publican, shopkeeper, newsagent, hairdresser or the like. At the beginning of each month the smoker would have a busy few days picking up a packet of cigarettes from the hairdresser, another from the newsagent and so on. (https://jcpml.library.curtin.edu.au/resources/johncurtin/smoking/)

https://trove.nla.gov.au/newspaper/article/11344383    This article from the Melbourne Argus, 15 June 43 seeks to reassure readers that tobacco/ cigarettes are not ‘freely available’ to members of the Forces.

This paper describes the development of the AMF ‘Operational Rations’ packs. It seems that the Australian Army was well ahead of others, on either side of ‘the argument’ in its thorough research and practical work in this field. https://www.army.gov.au/sites/g/files/net1846/f/operational_ration_o2_0.pdf 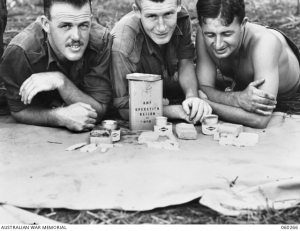 Although at a different location, I can imagine that Dad’s church parades might have looked like this: 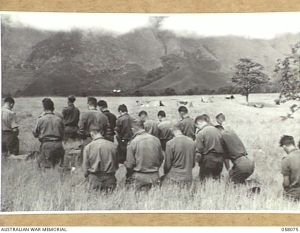 Clearly regular mail deliveries were still getting through in good time, but the powers that be anticipated a different story with telegrams – as per this entry in the Routine Orders dated December 1st :

This entry was posted in Food and Drink, parcels, unit parades and church parades. Bookmark the permalink.