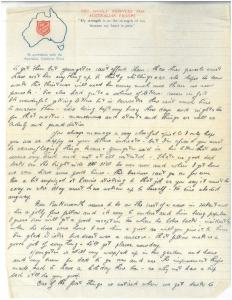 We’re back in barracks again – our sojourn in the hills came to an abrupt though not entirely unexpected conclusion on Monday morning – whilst enjoying a game of bridge on Sunday night the sergeant was summoned to the orderly room of the Company we’ve been working with and acquainted with the melancholy news that we were to strike tents and report back to barracks on Monday morning.  As though anticipating the return the fellows staged a party on Saturday night – last week being pay week they were all cashed up and as there was plenty of beer available made a big night of it.  Our parties are rare events but always good and this one was particularly bright.  It went with a swing from the start – wit and humour flowed freely and we and some community singing and two or three really good items from the platoon songsters – Smudge (?) Smith (a New South Wales chap) and Aggie Lloyd from Launceston.  A couple of times during the evening we called a parade and had a roll call to make sure there were no AWL’s – not men but bottles.  For supper we had biscuits – very nice too.  Jack Reinke got an anonymous parcel – a twelve pound tin of creams from South Australia.

Sunday was a bleak & miserable day and we spent the morning in bed and after lunch played Bridge – a very enjoyable weekend and a fitting climax to our fortnight in the hills.  Though of course everyone was sorry to have to come back they all felt the benefit of the hard work and mountain air.

The postman has been particularly kind to me this week – my return to barracks was greeted with three parcels – two very nice cakes and a parcel of good things from Myers.  It’s very nice to get them but Youngster can’t afford them.  Those three parcels must have cost her anything up to thirty shillings and as she hopes to leave work this Christmas will need her money much more than we need parcels.  I’ve also had quite a volume of letters – seven in fact.  It’s wonderful getting letters but in barracks there isn’t much time to answer them.  We’re being kept very busy these days and nights too for that matter – manoeuvres and stunts and things as well as orderly and guard duties.

You always manage a very cheerful epistle.  I only hope you are as happy as your letters indicate – but I’m afraid you must be camouflaging things, because Youngster said in her letter that dad seems very tired and not at all contented.  That’s no good dad.  Look on the bright side – it’ll be over soon and when I get home we can have some good times – this business can’t go on for ever.  I’m a bit surprised at Laurie sticking to that job – as you say it must be easy or else May must have woken up to herself – it’s time she did anyway.

Ron Butterworth seems to be on the crest of a wave in Hobart now – he’s a jolly fine fellow and it’s easy to understand him being popular.  I guess Ken will get a good reception too when he lobs back – incidentally when he does come home I owe him a quid so will you give it to him.  I’m glad Dick’s broadcast was a success – that fellow makes a good job of everything – he’ll get places someday.

Youngster is still very wrapped up in her garden and home and very keen for dad to go over and see the improvement they’ve made and to have a holiday there too.  So why not have a trip dad it’ll do you good.

One of the first things we noticed when we got back to barracks was the nucleus of the battalion band.  I believe all the instruments are here and they have the men picked for the job so it shouldn’t be long.

I was out testing carriers today and one of them was being driven by a young New South chap whom the boys have named the Albury Basher – the wildest man who ever sat behind a wheel.  He’s got some notable achievements to his credit, not least of which was running into an ornamental grill on the verandah of one of the barrack blocks and busting about ten feet of it – quite a commendable job.  Anyway, getting back to the story – he was driving a bit close to the side of the road and caused a donkey to take fright and career off into the olive grove, leaving the wog who was riding it suspended in the olive branches – a very comic sight but I’m afraid he didn’t see the humour of it.  These wogs haven’t got much sense of humour.

Among my other letters was another one from Jack.  He’s still full of beans, sparking on all six, been very busy helping with a comfort funds drive – a lot of wasted effort but I suppose it keeps him out of mischief.  Mrs Toomey was quite concerned that I hadn’t written for some time – she’s in a bit of strife with the drought.  Both Mr Laird and Billie wrote very nice letters – so you see I’m being well treated.

Will say cheerio now Mum & dad – keep the sunny side up.  All the best to the boys  Jim McDonnell wishes to be remembered.

PS Don’t send any socks or clothing of any sort – I’ve got tons.

PS Remember me to Mr & Mrs Phillips.  I’ll try to write them for Christmas if not before. 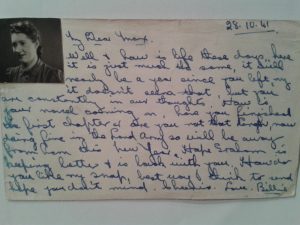 Billie Laird and her parents had extended wonderful hospitality to Dad and his friend Graham when they were in Glasgow pre-embarkation for the Middle East, in January 1941.  Billie and her parents wrote regularly, but few of the cards and letters survive. 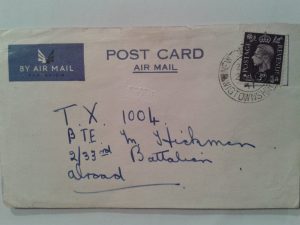 Well how is the life these days?  Here it is just much the same, it will nearly be a year since you left, my it doesn’t seem that, but you are constantly in our thoughts.  How is your novel coming on?  Have you finished the first chapter or are you not that length.  Now doing fine int he Land Army so will be away from home this New Year.  Hope Graham is keeping better & is back with you.  How do you like my snap, best way I think to send.  Hope you so don’t mind.  Cheerio.  Love, Billie.

Manoeuvres and stunts and things

The Footsoldiers offers some detail on the routine for those who had returned to the barracks:…the week being organised into four days digging, two days infantry training, section, platoon and company exercises, and one day rest…..and included one night each week of cross-country movement and patrolling.  The diggings for down to six feet, with parados and parapets.  We filled thousands of sandbags and erected mile upon mile of concertina barbed wire fences…

Tripoli, Syria.  11/1941   With automatic weapons and rifles C Coy of the 2/33rd Infantry Battalion stand ready in their trenches to meet any attacks. 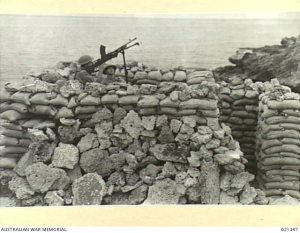 Anti-Aircraft Defence was one of the main features of the fortification of El Mina in the port of Tripoli.  Here, members of the 2/33rd Infantry Battalion are seen with a Bren gun on Thaoulin Island.  They are NX68874 Private B J Hollis and RX71460 Private G Hillier.

There was great concern among the Army leadership that the enemy would target the SPC (Syrian Petroleum Company) refinery and oil storage facility at Tripoli.  This concern had resulted in the doomed ‘Operation Boatswain’ in May 1941 – a joint British-Palmach (underground Jewish fighters) attempt to sabotage the facility, in order to prevent that fuel being made available to the Axis forces.  (see https://en.wikipedia.org/wiki/Operation_Boatswain)   The photographs above reflect this ongoing concern.  As well as the refinery, there was a ‘tank farm’ of 27 storage tanks, a pumping station, wireless station and workshop at the site.