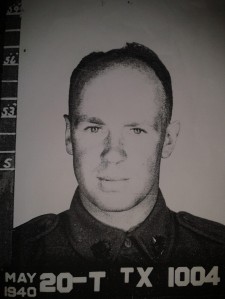 My name is Felicity Hickman.  I grew up in Tasmania, with three sisters and a brother.  Until we left home, we lived in the house my father built in Pottery Rd, Lenah Valley. Mum continued to live in the same house until moving into a nursing home in 2009.

My father, Maxwell Lloyd Hickman died in october 1990 at the age of 79.  Soon afterwards, Mum distributed various items of memorabilia to different members of the family.  An old cardboard box full of letters, cuttings, photos and brochures relating to distant places was to be thrown out – but I claimed it, promising that one day, I would get around to sorting and reading the contents.  These items all related to Dad’s war service.  He had enlisted in March 1940, just a couple of weeks short of his 29th birthday, and left Sydney on board the Queen Mary as part of a huge convoy on May 4.  He was stationed in England, Egypt and Palestine before seeing action in Syria, and later New Guinea and Borneo and was finally  discharged in October 1945.  For most of that time he served with the 2/33 Battalion AIF.

I dipped in to the letters’ contents occasionally but it was not until I managed to locate a copy of the official Battalion history – The Footsoldiers by William Crooks – that I was able to make sense of some of his comments.  I was further assisted in this process of building understanding of dad’s experience, through conversations with the last surviving member of the Battalion living in Tasmania.  Thanks to the secretary of the 2/33 Battalion Association (Yvonne Unitt) who placed my request in the unit newsletter (Mud and Blood) I was able to meet Dick Lewis, who had spent the first half of the war (1940 – 42)  in the (Bren Gun) Carrier Platoon with Dad.  Dick’s comments will be included in the blog from time to time.

I will eventually donate the whole collection of letters to the RSL or the Australian War Memorial, but in order to facilitate the giving of feedback by others interested in the perspective of a regular soldier in World War II, I have decided to transcribe them and present them in the form of a blog – the blog that might have been!

I will add photos and other material, as well as my own reflections on the comments and experiences Dad shares in the letters.   There are also some letters from his parents, and a few to his sisters and other friends.

This is my first blog, so I will be learning as I go along, and welcome any comments and suggestions from readers.