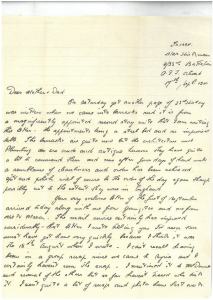 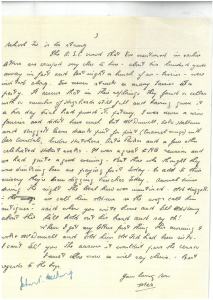 On Saturday yet another page of 33rd history was written when we came into barracks and it is from a magnificently appointed second storey suite that I am writing this letter.  The appointments being a steel bed and an improvised table.  The barracks are quite new but the architecture and plumbing are crude and antique.  However they have quite a lot to commend them and now after four days of hard work a semblance of cleanliness and order has been achieved.  Spit and polish will of course be the order of the day again though possibly not to the extent they were in England.

Your very welcome letter of the first of September arrived today along with one from Youngster and one from Mick Mason.  The mail service certainly has improved considerably.  That letter I wrote telling you I’d seen Ken must have got home very quickly because I think it was 18th August when I wrote – I can’t recall having been in a group snap since we came to Syria and I certainly haven’t seen the snap.  I mentioned it to McDonnell and several of the others but so far haven’t traced who took it.  I sent quite a lot of snaps and photos home last week.  I hope I didn’t pick a bad time to send and that they make the grade.  The Orderly Room was packing to move and I believe the mail was held for a couple of days till we came into barracks.

Did I mention in my last letter that I had received a cake last Friday?  From Youngster – it looks a beauty but I haven’t cut it yet – will keep it till Friday (Youngster’s birthday).  Then on Sunday I received another pleasant surprise in the form of two parcels from you – one of eats, and one of soaps.  The insect powder could not have come more opportunely and of course the eats particularly the scallops and fruit are a welcome diversion from army food, especially the preparations that the Headquarters Company cooks prepare.  I know you won’t mind my saying that tinned meat and sardines don’t meet with much approval – any tinned meat is related to bully beef and sardines bear some resemblance to herrings and I guess Dad knows our attitude towards those luxuries.  But thanks a lot for the parcels Mother – we’re going to do the scallops up tonight.

Youngster’s letter today was one of the most cheering and cheerful letters I’ve and in a long time.  She said she was feeling much better and is happy again now that she can spend some time in the garden.  She’s very wrapped up in her home.

That case against Doctor Hiller didn’t last long did it?  It’s a hell of a job to pin anything on a doctor – the old school tie is too strong.

The ASC crowd that I’ve mentioned in earlier letters are camped very close to here – about two hundred yards away in fact and last night a bunch of us – Tassies – were invited along.  I’ve never struck so many Tassies at a party.  It seems that in their explorings they found a cellar with a number of hogs heads still full and having given it a two day trial had proved its potency.  I was never a wine fancier and didn’t have much but McDonnell, Ack Hallam and Nuggett Geeves drank pint for pint (enamel mugs) with Sam (?) Coverdale, Gordon Hutchens, Artie Parker and a few other celebrated Hobart soaks.  It was a great little reunion and we had quite a good evening.  But those who thought they were drinking beer are paying for it today.  To add to their misery they’ve been digging trenches today.  Several times during the night the local brew was mentioned – Old Nuggett – we call him old-un so the wogs call him ‘antiquer’ – said when you write home and tell old Henry about this he’ll hold out his hand and say Oh!

When I got my letters first thing this morning I woke McDonnell and told him old Ted had been sick – I can’t tell you the answer – it wouldn’t pass the censor.

I must close now so will say cheerio.  Best regards to the boys.

The Barracks:  From The Footsoldiers

At 0600 hours, 13 September, the  battalion moved in convoy along the north road, arriving at the sea port of Tripoli at 1600 hours the same day.  Here, just two miles above this pleasant and ancient fishing town, we occupied the French Legault Barracks.  Built just ten years before, it consisted of three vast, two-storied concrete barracks surrounding a parade ground square.  Walled around and gated, complete with guardhouse and cell block, it fronted the main road which ran down to the town 600 feet below.  Much of 14/15 September was used in settling in and cleaning the place up.  Both the 2/25th and 2/31st Battalions were also barracked in this sprawling garrison site.  With one platoon to a room, and each man with an iron bed, it was reminiscent of our barrack days in England.  Although the use of the toilets with a hole flush with the floor, water washing underneath, and two non slip grooves beside the hole made us wonder.  The place, nevertheless, was agreeably comfortable.   (pp 125-26)

AIR MAIL: Airmail is now received once weekly from Australia until further notice

From Routine Orders August 23 – Abundant writing materials are always available with the Padre and tps are advised to avail themselves of this offer.

Spit and polish will be the order of the day

2. BOUNDS   Tripoli is OUT OF BOUNDS to all ranks until further notice

3. ROUTINE   The following daily Routine will be strictly adhered to

4. BLACK OUT PRECAUTIONS  Strict Blackout precautions must be observed.  All lights burning at night must be carefully blacked out.

5. LEAVE  No leave will be granted out of the Barracks area until further notice.  NO person or vehicle will leave Barracks without written authority from this Office.

Dr Hiller and the ‘old school tie’ – a most peculiar trial! 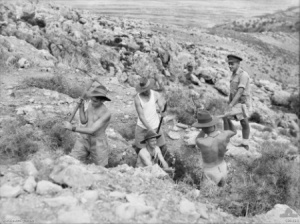