Events on the various fronts…almost too good to be true

Your welcome letter of 24th August arrived today.  I’m glad to know you’re both fit and well.  The last letter I had was written in a handwriting I didn’t recognise and then when there was no letter at all last week I thought the pater mist be sick so that your letter today was very reassuring.

Quite a lot of things seem to be happening around home.  Is Alec Worby getting married or just buying a block to hold?  Jack Lewis(?) seems to have gone back to his old job rather well – it’s quite up to his standard sending young Pringle to you although the security might be alright.  As you say old Nev is getting on. I guess he’d like to have the money he’s spent in whisky now.

There’s no doubt about it the people at home are only half hearted about the war – even as things are, the political crowds wrangle over the spoils.  It’ll be interesting to see whether Fadden can make a job of things.  Our ideas of democracy need a big overhaul.  Politically they’re a farce, socially they’re childish and commercially piratical.

Events on the various fronts have been much more interesting lately – almost too good to be true.  The news tonight is most encouraging.  The Russians seem to be holding the Germans well and at sea and in the air England is doing good work.  If they can keep it up till Christmas we might be home for Easter.  We’re moving into barracks in the weekend so we look like staying here for the winter.

I didn’t go on that three day stunt I mentioned in my last letter – it was optional and only involved a reconnaissance of the areas where we were fighting.  The other company’s stunts took them through Damascus and Baal-bek which would have been very interesting but riding three days in the back of a truck wasn’t in my line at all – although I believe those that went struck some Aussie beer at the Tommy canteens – Cascade and Carlton – any quantity they wanted too – whilst all we can get is wog beer.  There’s something wrong somewhere when the Tommies can get any quantity they want of Aussie beer and we can’t get any – It looks like some palm grease somewhere – our crowd must be getting the sugar from the local heavies.  Incidentally the crowd were very amused to see depicted in Pix the Australian soldier’s diet – we concluded that they must mean the Militia.

I am enclosing some snaps and photographs which I think you will like and find interesting too.  I’m orderly dog today and have had about sixty interruptions since I started this letter so I will sign off now.  Regards to the boys and love to May & Anne.

Australia entered into the Second World War on 3 September 1939, and the period from 1939-1941 was one of instability in federal government. It was marked by conflict between the United Australia Party (UAP) and Country Party coalition partners, and by power struggles within each party, with the leadership of each changing several times.

In October 1940, when AG Cameron quit leadership of the Country Party, Earle Page and John McEwen contested the leadership, resulting in a tied vote. Fadden, as Deputy Leader, was appointed ‘Acting Leader’ to break the deadlock. He was confirmed as party leader on 21 March 1941, and retained the position for the next 17 years.

Fadden served as Minister Assisting the Treasurer and Minister for Supply and Development in Robert Menzies’ United Australia Party-Country Party coalition from March-August 1940, then as Minister for Air and Minister for Civil Aviation from August-October 1940, and finally as Treasurer from October 1940-August 1941. He was a member of the war cabinet from 1940 to 1941.  In January 1941 Fadden became Acting Prime Minister for four months while Menzies was overseas. After increasing dissension within the UAP-CP coalition, Menzies resigned as Prime Minister on 28 August 1941 in favour of Fadden.

The front page of the Launceston Examiner on September 2, 1941 has articles regarding the many fronts on which Allied forces were fighting – including Russia. I assume radio reports were more selective in focussing on the positives for the Allies, rather than including reports from Germany itself.   There is also an extract from a letter written by Robert Menzies for London’s Daily Mail in which he predicts Victory in 1942, and an article headlined ‘Signs that Axis May Attack Turkey’.  No doubt this concern played a part in the decision to hold Australians in northern Lebanon/ Syria over the winter.

The Hobart Mercury on Saturday 6th September also makes fascinating reading.  Claims and counter-claims from German and Russian sources in particular must have reminded Dad of those German broadcasts that they used to hear in England – of half the British navy being sunk on a daily basis.

(A British convoy in Syria )

to see the sights… 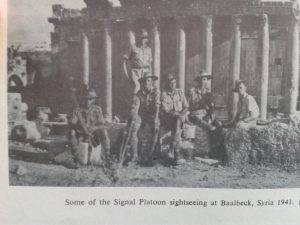 Battalion members at Baal-bek  (from The Footsoldiers)

I’ve been unable to locate the actual Pix article referred to, but here is one from Brisbane’s Courier Mail in September 1941 that seems to be of a similar tone, and may have arisen from the same press release:  http://trove.nla.gov.au/ndp/del/article/41941795

Headlined ‘Australia’s New Army Cooks Earn New Dignity’ it describes how scientifically balanced the soldier’s diet is, how much attention is paid to providing fresh fruit and vegetables, milk (generally powdered) and cheese, what cooking methods are used to ensure maximum benefit to the soldiers.  A few quotes…There are two objectives in Army feeding – first, to satisfy the soldiers’ idea of ‘good tucker’ and second to apply modern knowledge of nutrition so that the soldier will be built up in health, fitness, stamina and vigour and withstand the strain of total war and the risk of epidemic disease. …..Australian soldiers are provided with three times the quantity of fruit and vegetables eaten by the average civilian….And if our testing time does come, well, V stands for Vitamins, Vitality and Victory.

The article does speak about camps in Darwin and North Queensland, so could – as Dad suggests- relate mainly to the Militia, but it does also mention the availability of oranges and grapefruit in Palestine, carrots and cabbages in Cairo and in Tobruk – vitamin C tablets.  No doubt, as with the constant invocation to troops to ‘write home first’, the Army’s PR machine was focussed on providing families with a positive picture of the provisions being offered to their boys.

This entry was posted in Australian, gambling and drinking, organisation, The course of the war and tagged soldier's diet, Tommy canteens, wog beer. Bookmark the permalink.