Plenty of mail, regimental hooey, dangerous drinks and instruction in the use of pick and shovel !! 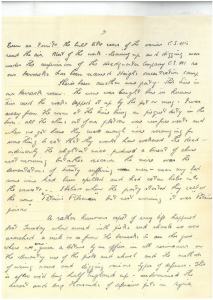 Your welcome letters of the 18th August and sixth of September came in today.  The 18th August had evidently been held up.  In addition to your two interesting epistles there was one each from May, Youngster, Jack Chandler, Mae Menzie and Daisy Gourlay so I guess my spare time during the next few days will be well taken up.  Very sorry to hear of the deaths of Aunt Min and Aunt Sylvia – I must write to Tom & Dorrie.

The other letters were very interesting too, covering as you may well imagine a wide field of ideas and news.  I had quite given up expecting a letter from the Menzie’s.  It’s so long since I heard from them – in fact nearly four months (1st June).  The youngster’s letter and May’s were very newsy and Jack of course was his usual cheerful self.

On our side we have settled into barrack room like again and the barrack square has become the scene of regimental parades, guard mountings and piquets – all a lot of hooey but very nice to watch.  The many bugle calls sounded during the day together with the hoisting of the Battalion flag at reveille and the lowering at retreat are integral parts of Barrack life.  Even as I write the bull-like roars of the various CSM’s rend the air.  Most of the work – cleaning up and digging – was under the supervision of the headquarters Company CSM so our barracks has been named Haigh’s concentration camp.

There’s been another wine party.  This time in our barrack room.  The wine was brought here in kerosene tins and the soaks lapped it up by the pot or mug.  I was away from the room at the time, being on piquet duty in the town – others out of our platoon were reinforcements and when we got home they made enough noise scrounging for something to eat that they would have wakened the dead.  Ordinarily the slightest noise produces a torrent of abuse next morning but on this occasion the noise was the lamentations of twenty suffering men.  Near my bed some wine had been spilled and had eaten holes into the concrete.  I believe when the party started they called the wine ‘Petain’s Pilsener’ but next morning it was ‘Petain’s poison’.

A rather humorous aspect of army life happened last Tuesday when armed with picks and shovels we were marched a mile or so from the barracks to an olive grove where we were given a lecture by an officer in all seriousness on the elementary use of the pick and shovel and the methods of using same and digging various types of defences.  This is after we’d dug half of England up, undermined the desert and dug thousands of defensive pits in Syria – and when he called on me to give a demonstration well that was the last straw.  Last week I sent you a few snaps of Syria.   In this letter I am enclosing a few taken during the last few days of our sojourn in England.  Except for the one taken in the cabin of the Nea Hellas (the advance party had made ourselves at home in a good cabin but our occupancy was short lived for on the morrow we were transferred to the bowels of the ship).  To get back to the story – I was going to say that I’m not in any of the other snaps, they having been taken whilst we were in Scotland with the advance party.  Incidentally I’ve had another letter from the Lairds – they still want us to go back there for another Hogmanay, though I guess it won’t be this one.  Although we don’t know the minds of the mighty it looks as if we’ll be here for the winter and make a move somewhere in the spring.

Must say cheerio now.  Best regards to all the old Brigade and of course the boys.

Deaths in the family

Aunt Min was Minnie Bealey who was married to Dad’s great uncle Tom.  She was 63 when she died.   Their daughter Dorrie  lived with them, and never married.  I have been unable to trace Aunt Sylvia. 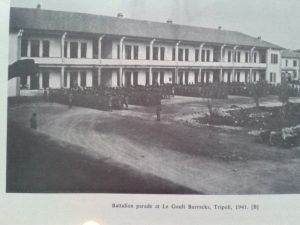 Photo – Battalion parade at Le Gaault Barracks – from The Footsoldiers

Instruction in use of pick and shovel

(only pages 1-3 of this letter exist)

I was very surprised – agreeably so – to receive your letter of 23rd July.  Thanks for all the nice things you had to say.

Your analysis of the life is very appropriate Daisy even though you consider it ‘dreadful construction’.  Considered as a whole it is a marvellous experience.  The many and varied incidents and happenings, the ever changing scene, even the long periods of intense boredom and the fortunately short periods of frightfulness merge together in a wonderful whole.  The world in general and particularly those who get through this show will be the better for the experience.

To have travelled thirty five thousand miles of ocean in two of the greatest convoys that ever sailed, to have seen a great nation struggle to its feet after what seemed a death blow, to have seen the stoicism of the British nation and tasted its hospitality under war conditions are experiences that even the power of the purse cannot buy, and added to this the conglomeration of experiences of every imaginable type encountered in the not so romantic east make a story that outshines ‘Gulliver’s Travels’ and reduces to insignificance the exploits of Richard Haliburton.  No man who made the grande tour appreciated every phase of it more than I did.  Unfortunately all too many were incapable of appreciating the full significance of the experience and were too intolerant of the ways of others to understand the various peoples with whom we came in contact.  To anyone with the slightest interest in psychology the tour has been a revelation.

Whilest most fellows find little to commend it I find Syria wonderfully interesting – the amazing scenery, the historical and biblical associations and the remarkable collection of human beings that make up then population are an unceasing source of interest.  A country of conflictions and contradictions, Syria has had the most chequered history of any country in the world.  From time immemorial it has been the battleground of the middle wast and the many peoples that have conquered or occupied it have left their mark so that today there are numerous races still retaining their national characteristics and individuality.  The Lebanese dissociate themselves froth Syrians whilst the Jebel Druse – believed to be one of the lost tribes of Israel and the original worshippers of the golden calf – dissociate themselves from both Syria and the Lebanon.  Some of the mountain scenery is the best I’ve ever seen and I really think the best in the world.  Around the Jezzine area where we were fighting the rugged mountains, some of them ten thousand feet high, made a picture of unbelievable grandeur.  The terraced foothills and unbelievably crazy patterns made by the multicoloured rock formations were beyond the description of pen or paint.

The ruins of ancient empires – Phoenician, Roman, Greek and of Crusading days are also very interesting.  At Ball-beck (where the Anti-Tank – Agle(?) Gourlay’s crowd) were stationed after the armistice, there are the ruins of five famous temples.  Some of the granite columns and stone work still stand as a monument to the workmanship of five thousand years ago.  One of the things that confounds everyone is how they got the huge cut stones into place.  In one of the temples there’s a stone sixteen feet long and ten feet square on the section.  It would probably weigh eighty to a hundred tons.  At Byblos just north of where we were stationed for eight weeks after the armistice are the ruins of another Phoenician city – most of the royal tombs have been dug up by French archaeologists for the gold and jewels they contained – here also are the remains fo a Roman amphitheatre and still standing a Crusaders Castle.

(remainder of letter is missing)

This entry was posted in Camps and Barracks, gambling and drinking, Letters to/ from others, Middle East, organisation, training, Uncategorized and tagged Daisy Gourlay, monuments. Bookmark the permalink.