A parcel with scallops – hoping they’ll go the rounds 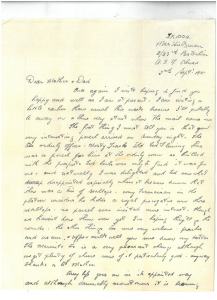 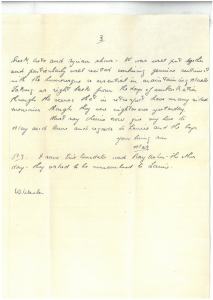 Once again I write hoping to find you happy and well as I am at present.  I am writing a little earlier than usual this week because I’ll probably be away on a three day stunt when the mail comes in.

The first thing I must tell you is that your very interesting parcel arrived on Sunday night.  The orderly officer Monty Trask told Ted Fleming there was a parcel for him at the orderly room so thrilled with the prospects Ted bowls over only to find it was for me – and naturally I was delighted and Ted somewhat disappointed especially when it became known that there was a tin of scallops – every Tasmanian in the platoon considers he holds a royal prerogative over those scallops – no parcel ever incited such interest.  Though we haven’t done them over yet I’m hoping they’ll go the rounds.  The other things too were very welcome – peaches and cream, coffee & milk – well you sure know my tastes. The marmite too is a very pleasant change although we get plenty of cheese some of it particularly good – anyway thanks a lot Mother.

Army life goes on in its appointed way and although damnably monotonous it is becoming much more tolerable now that the weather has started to cool off and cards are becoming more and more sought after and when not on duty we spend the long evenings playing bridge or crib.

McDonnell and Peter McCowan afford some amusement at times.  McDonnell as you know is Irish to the backbone whilst McCowan is equally Scotch and when they get on the hops (you know Mc’s form) they argue like hell.  Sometimes Snow Lewis (a nephew of Colonel Lewis) joins the happy party.  Snow as you might guess comes from ultra-conservative English stock and although very tolerant towards mankind generally has very definite ideas about Ireland, Irishmen and the Labour Party, which he expresses very fluently after eight or nine bottles.  Whatever transpires in the course of the argument they invariably wind up singing Irish and Scotch airs.

On Saturday night another concert party visited the camp.  They were a Chinese string band and for a little over an hour we had an absolute musical feast ranging from Liszt’s Hungarian Rhapsody and ‘Ave Maria’ to our own classics – ‘Waltzing Matilda’ and ‘My Mabel waits for me’ and a chap with a steel guitar rendered three solo items – Hawaiian melodies, My Prayer and The Rosary – an Aussie chap put over a composition called ‘Wouldn’t your mother like to see you now’ covering various stages of the Greek, Crete and Syrian shows – it was well put together and particularly well recited combining genuine sentiment with the humoresque so essential in maintaining morale – taking us right back from the days of embarkation through the scenes that in retrospect have many sided memories though they were nightmares yesterday.

Must say cheerio now.  Give my love to May and Anne and regards to Laurie and the boys.

PS I saw Eric Coverdale and Ray Usher the other day.  They asked to be remembered to Laurie.

Although not of this Battalion, this photo by Frank Hurley makes clear that ‘orderly room’ is a generic term, not requiring there to be an actual room: 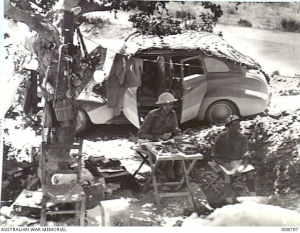 In researching the Tasmanian scallop industry, I had formed the view that due to its fledgling nature in the 1930’s and early 40’s the scallops in the parcel were probably from another state. However  according to this article from the Melbourne Argus (June  26 1940), “Henry Jones & Co at its Hobart factory have been canning scallops, tuna and other fish for some time.” http://trove.nla.gov.au/ndp/del/article/12477010       I do still believe that scallop canning would have been on a very small scale.  In terms of the ‘Tasmania’s war effort’, the only fish mentioned in the booklet of that name (see Sources) as having been canned in any quantity by Jones & Co during the war, is whitebait.

The importance of the mail

Wonderful article from the Barrier Miner about the importance of continuing to write letters and send parcels and newspapers to the troops – and emphasising their conscientious approach to responding.  It still amazes me, that they had to buy stamps from the canteen and relied on ‘comfort fund’ provisions for paper.  http://trove.nla.gov.au/ndp/del/article/48375626

This poem by Australian David McNicoll was written during the war – presumably during 1941/42.  McNicoll went to the Middle East as a trooper with the 7th Division Cavalry. In 1942 he was commissioned and attached to the Military History and Information Section, Head-Quarters, AIF (Middle East). He became officer-in-charge of No. 2 Field Unit…in 1954 he became editor in chief of Australian Consolidated Press

“Praise God, from whom all blessings flow,”

The padre said; and row on row

The rustling hymn books, in the sun,

Flickered, were folded. Then as one

A thousand voices stirred the air –

Were silent. Heads were bent in prayer.

Above the Padre’s voice we heard

With silvered wings, we saw the plane

Above the sandhills, out to sea,

Heading, with mail, to Galilee.

And in the clouds we saw again

Our homes; the noonday shimmering sun

On farm, and beach, and station run;

The stock knee-high in summer grass,

The shearers nodding as we pass,

Each stand; the silos crammed with wheat,

The sheepdogs panting in the heat;

The breakers’ curl, the lash of foam.

The aching, taunting thoughts of home.

“Praise God, from whom…”, and each man bends

His head, to thank his God who sends

Halfway across the world, the mail:

Who deems those engines shall not fail,

But that they bring across the sea

The mail, to His own Galilee.