The old hands are certainly browned off : a joyless journey north 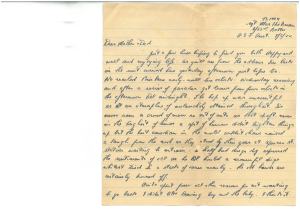 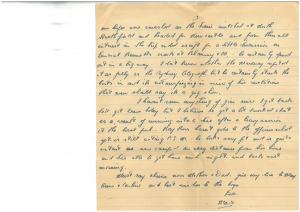 Just a few lines hoping to find you both happy and well and enjoying life.  As you’ll see from the address I’m back in the unit – arrived here yesterday afternoon just before tea.

We reached Brisbane early – well, ten o’clock – Wednesday morning and after a series of parades got leave from four o’clock in the afternoon till midnight.  The trip up was uneventful as an atmosphere of melancholy obtained throughout.  I’ve never seen a crowd of men so out of sorts as that draft – never in the toughest of times a spot of humour didn’t brighten things up but the best comedian in the world couldn’t have raised a laugh from the mob as they stood by their gear at Spencer St Station waiting to entrain.  A half bred dingo dog expressed the sentiments of all as he howled a mournful dirge whilst tied to a stack of cases nearby.  The old hands are certainly browned off.

Quite apart from all the other reasons for not wanting to go back, I didn’t like leaving Ivy and the baby.  I think it was doing her good to have someone to talk to and the young fellow is a bonzer kid.  I thought him a bit cross and niggly the first couple of days as he cried quite a bit but am sure he must have been sick or else excited by having a stranger in the house as he was absolutely perfect during the last week.  I played with him every day and took him walks and that sort of thing and he was very happy.  I certainly hope she’ll be able to get over but as I suppose she’s told you there’s very real obstacles in making the trip.  But if she does make it do all you can to make them happy because they’ve had a tough trot.  Youngster’s not at all well and is becoming a prey to herself.  I wouldn’t say anything about Bill dad because she’s easily upset and nothing upsets her more than anything said about him.  She’s a great girl and a wonderful mother and has had a terrible tough trot and although she has very set ideas as a result of being alone and being naturally independent, give in to her rather than argue with her.

The trip up was uneventful.  From the time we left Melbourne till we reached Brisbane.  We all hoped we might stop at Sydney but just after daylight on Tuesday our hopes were smashed as the train switched at North Strathfield and headed for Newcastle and from then all interest in the trip ended except for a little discussion on General Bennett’s crack at Blamey & Co.  He certainly opened out in a big way.  I don’t know whether the Mercury reported it as fully as the Sydney Telegraph but he certainly stuck the boots in and it’s not surprising in view of his revelations that men should say it’s a gig show.

I haven’t seen anything of Jim since I got back.  He’d got leave today but I believe he got a bit knocked about as a result of running into a tree after a heavy session at the local pub.  Ray Ross hasn’t gone to the officers’ school yet – is still acting CSM.   He looks very fit and is quite content as we’re camped an easy distance from his home and he’s able to get home each night, and back next morning.

Must say cheerio now Mother & Dad.  Give my love to May, Anne & Carline and best wishes to the boys.

Troops enjoying a card game of poker during their long train trip taking them from Melbourne to Brisbane.

Clapham Junction Qld.  The ice cream vendor with his horse and cart doing a roaring trade serving the troops from the Melbourne to Brisbane troop train.

(Even here, they don’t look too happy!)

Sydney’s Daily Telegraph of Tuesday 2nd May 1944 : https://trove.nla.gov.au/newspaper/article/248890055/27288563  Under the headline Gen. Bennett Defends Malaya Escape  this article quotes extensively from an interview with Lieutenant-General Gordon Bennett who had been denied an operational command in New Guinea by Chief of Army, General Blamey and had decided to return to civil life.  He was forthright in his criticism of Blamey and said he did not want to belong to Australia’s ‘chair-borne troops’.

Bennett was a controversial figure, having escaped from Singapore at the time of the British surrender in February 1942.  The Australian Army hierarchy viewed his action as desertion, but my reading suggests that the men of the 8th Division generally did not, and accepted his assertion that his return to Australia to advise on Japanese tactics was appropriate.  The War Cabinet in Melbourne congratulated Bennett, and Prime Minister John Curtin wrote “His conduct was in complete conformity with his duty to his men and to his country”.  However, General Blamey maintained his antipathy towards Bennett – and as the Telegraph article shows, the feeling was reciprocated.  A recent publication explores Bennett’s decision in more detail – Gordon Bennett: Hero Or Deserter by Roger Maynard, Penguin Random House 2017

From the way he speaks in this letter, it seems to me that Dad – like the men of the 8th Division – supported Bennett.

Liberal leave was allowed and half of the unit was allowed to be away for a night’s leave every night.  Soon some rather odd names were given to various categories of leave groups.  All those – mainly Queenslanders – who had brought their wives to live in Brisbane were granted permission to live out at night.  These men could ‘knock off’ at 1600 hours when the training period finished and not return until first training parade – 0800 – the next day.  For months these were referred to as “day boys”, although this was the kinder of the two names that were current.  The already overtaxed suburban trains …..had problems coping with the extra passengers but the troops’ morale was kept high. By the time the unit left Strathpine, and later Petrie, roads had been worn through the bush from the tent lines to the Lawton and Strathpine Station platforms.

This entry was posted in Hierarchy, training. Bookmark the permalink.