Extended leave about to end… two letters from Melbourne 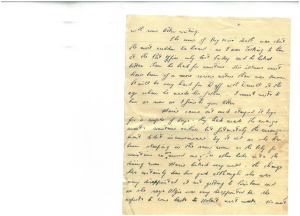 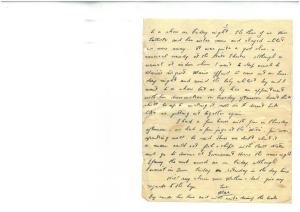 Just a few lines hoping to find you both happy & well as we are here.  Ivy seems fairly well although by no means fit.  The baby is very happy but a tremendous strain on her – his unbounded energy keeps her on the move all the time whilst the diet ordered for him takes a bit of time to prepare, and if he can’t get out on the grass gets a bit hostile.  He got a bit crotchety this afternoon although I’d tried to play with him for some time so we decided to take him for a walk and to this end covered his pram with a groundsheet whilst Ivy put another groundsheet over her shoulders and I wore Bill’s raincoat.  The weather was lousy – has been all day in fact, ever since yesterday afternoon – but we struck a pretty good patch for a bit over an hour and when we got back the young fellow was quite happy and has had his tea and gone to bed and whilst Ivy is drying his clothes by the fire I’ll catch up with some letter writing.

The news of Reg Wise’ death was about the most sudden I’ve heard – as I was talking to him at the Post Office only last Friday and he looked better than he had for some time.  His illness must have been of a more serious nature than was known.  It will be very hard for Daff with Darrell at the age when he needs his father.  I must write to her as soon as I finish your letter.

Marie came out and stayed at Ivy’s for a couple of days.  They had made the arrangements sometime earlier but fortunately the arrangement didn’t inconvenience Ivy at all as she has been sleeping in the same room as the baby for some time so we moved one of the other beds into the dining room.  Marie looked very well.  The change has certainly done her good, although she was very disappointed at not getting to Brisbane and as she says Angie was very disappointed too.  She expects to come back to Hobart next week.  We went to a show on Friday night – the three of us – Miss Tulloch and her sister came and stayed whilst we were away.  It was quite a good show – a musical comedy at the State Theatre.  Although as usual at indoor shows I went to sleep much to Marie’s disgust.  Marie offered to come out on Tuesday night and mind the baby whilst Ivy and I went to a show but as Ivy has an appointment with her dressmaker on Tuesday afternoon doesn’t think she’ll be up to making it so it doesn’t look like us getting out together again.

I had a few hours with Jim on Thursday afternoon – we had a few jugs at the Mitre – Jim was sparking well.  He said there’s no doubt about it a man could eat fish & chips with Bill Slater and go to a dinner at Government House the same night.  I fancy the mob moved on Friday although I wasn’t in town Friday or Saturday in the daytime.

Will say cheerio now Mother & Dad.  Give my regards to the boys.

Ivy sends her love and will write during the week.

A well known Melbourne establishment, still operating (2019).  According to the Tavern’s website http://www.mitretavern.com.au/history.html  the Mitre Tavern is the oldest building in the city of Melbourne.

Youngster is just getting tea ready so as we plan to play crib after tea will pen a few lines now.  Your welcome letter enclosed with Ivy’s arrived on Wednesday and made good reading though I’m sorry to hear Mother has had rheumatism again – apparently the Epsom Salts cure isn’t what it’s cracked up to be.  It may take some time to penetrate to the joints but I hope she is well again now.  It’s bad luck Carline being sick again.  There seems to be quite a lot of sickness about.  Must be the sudden change of weather.

The weather here has been lousy all the week too.  I had planned to do a lot of gardening but it rained  so much that I couldn’t get on the ground at all even to mow the lawn, though I did put some peas in.  The wood situation as far as buying is concerned, is rather tough.  I went round all the wood yards within a mile or more but they all had big waiting lists and couldn’t let us have any for some weeks.  Actually Youngster has quite a good stack – that is, for Melbourne – but I’d have liked to get her some more – so all I’ve been able to do, to help her was do the washing up and take the baby for a walk and he certainly enjoyed it too.  He’d wave to his mother from the pram till we were right out of sight.  When one hand got tired he waved with the other one.  He’s really no trouble though he gets a bit crabby at times but loves to frolic around.  We went to town on Friday afternoon and believe me he takes some looking after – climbed over everything in the tram and was interested in everything he saw in town especially when we stopped outside a shop whilst Ivy did her shopping.  He took stock of people, cars and all the passing show and came home quite pleased with himself.

I went out to Flemington on Saturday.  It was a beautiful afternoon.  The first good day of the week.  If Youngster could have made any arrangements for minding the baby she would have come too, but of course being Saturday afternoon everyone was busy.  I met Marie and her sister & sister’s husband – George Flint – a fine chap too – and we had quite an enjoyable though not profitable day.  Marie seemed to know quite a lot of people – Tasmanians – among them a cousin of Pat Wilson’s – I forget what Marie said her name was but Mother might know – she is in the WAAF’s.  A cousin of Marie’s apprenticed to one of the stables got a second in the apprentices’ race.

Well Mother & Dad it looks like the great run of luck with this leave has come to the end of its tether.  I reported back this morning but there was no draft out, got another day, but was told there’ll definitely be a draft tomorrow.  But I certainly can’t complain about this leave.  Viv arrived back this morning too so I’ll have company for the rest of the trip.  Must say cheerio now.  Give my love to May, Anne, Carline and regards to the troops.  Love

Youngster and the little bloke send their love.

As mentioned in letters from the previous winter (July and August 1943) firewood was indeed hard to obtain in both Melbourne and Sydney.  Ivy was actually fortunate to have had the support of a friend, Alex Sturrock – which is probably why she had ‘quite a good stack’, by Melbourne standards.

Tram travel could be tricky

Described as the ‘VRC Red Cross and ACF meeting’, a full report on the day’s racing can be found in the Melbourne Argus of Monday 1 May 1944:  https://trove.nla.gov.au/newspaper/article/11816629  (ACF is Australian Comforts Fund – the first race was the Comforts Fund Hurdle.)

It was not until 12 April that sufficient officers and men – some 250 – were assembled at Strathpine to formally being the rebuilding of the battalion.  Although not as bad as the difficult period… that existed a year before at Ravenshoe, not a great deal of enthusiasm was shown in the early days at Strathpine.  However the choice of a camp site outside a city such as Brisbane considerably helped the unit spirit and morale….. With the return of the New South Welshmen the unit was 400 all ranks by Anzac Day and the training syllabus began again.  Previously no training had been done – there were insufficient people to either give instructions or carry them out with purpose  – so gravel was carted to make parade grounds.

This entry was posted in leave. Bookmark the permalink.