A long hot walk back from the rear details camp 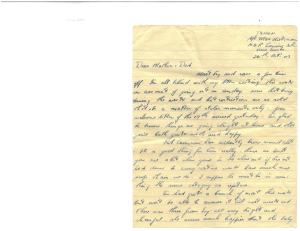 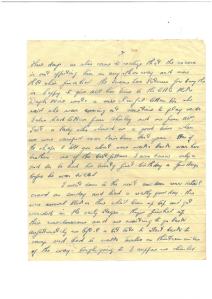 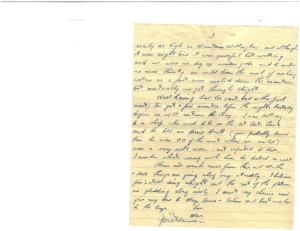 Must try and race a few lines off.  I’m all behind with my letter writing this week on account of going out on Sunday.  We’re that busy during the week and hut restrictions are so solid that it’s a matter of stolen moments only.  Your welcome letter of the 17th arrived yesterday.  I’m glad to know things are going alright at home and that you’re both quite well and happy.

Rob Cameron has evidently been around a bit.  It’s a good thing for him really.  There’s no doubt you see a bit when you’re in the show and if he’s not tied down to army routine would have much more scope than we do.  I suppose he must be in something the same category as reporters.

I’ve had quite a bunch of mail this week but won’t be able to answer it till next weekend.  There were three from Ivy – all very light and cheerful – she seems much happier about the baby these days as she’s come to realise that the excema is not affecting him in any other way and now that she’s finished the income tax returns for …. she is happy to give all her time to the little bloke.  Daph Wise wrote a nice cheerful letter too.  She said she was coming out some time to play cards.  I also had letters from Shirley and one from Mrs Tait – a lady who showed us a good time when we were camped near Brisbane last year.  One of the chaps I told you about some weeks back was her brother – one of the best fellows I ever knew – only a kid too – he had his twenty first birthday a few days before he was killed.

I went down to the unit rear detail crowd on Sunday and had a really good day.  There were several blokes there who’d been up top and got wounded in the early stages.  They’ve finished their convalescence and are waiting to go back.  Unfortunately we left a bit late to start back to camp and had to walk twelve or thirteen miles of the way – tough going too.  I suppose we climbed nearly as high as Mount Wellington and although it was night time it was powerful hot walking and we were as dry as wooden gods and to make us more thirsty we could hear the swirl of rushing water as a fast river rushed down the mountain but eventually we got through alright.

Well having had tea (not bad either – fresh meat) I’ve got a few minutes before the night’s bastardry begins, so will continue the story.  I was talking to a chap who used to be in the 1st Anti-Tank and he told me Horrie Strutt (you probably know him – he was CO of the unit when we sailed) was a very sick man – not expected to live.  I wonder what’s wrong with him – he looked so well.

There’s not much news from this end Mother & Dad – things are going along very steadily.  I believe Jim’s still doing alright and the rest of the platoon are plodding along nicely.  I must say cheerio now.  Give my love to May, Anne & Carline and best wishes to the boys.

We’re that busy during the week….

These photos may have been taken during the course in which Dad was participating : 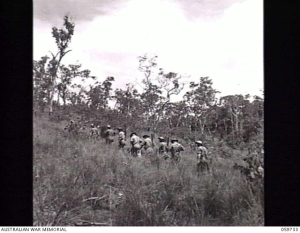 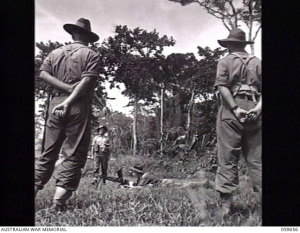 SX Sgt JA Curlis, an instructor of the NGF Training School, lecturing junior leaders on the operation of a Bren gun

There is no Tasmanian of this name on the world war II nominal roll.  (http://www.ww2roll.gov.au)  It seems he had an interesting role – ‘not tied down to army routine’, ‘something the same category as reporters’… so maybe PR?   It will have to remain a mystery to me!

Letters from Shirley and Mrs Tait

Shirley is the Scottish nurse to whom Dad became engaged while based in England.  By 1943 she had married a local man, but she and Dad were clearly still on friendly terms.  Mrs Tait’s young brother was John McGrow (QX 7355)  who had died on September 9 from injuries sustained in the Liberator crash on September 7.(see post dated Sept 22)

I’m not sure exactly where this camp was, but it’s possible the reference relates to the ‘details camp’ on the site of the old Murray Barracks in Port Moresby. 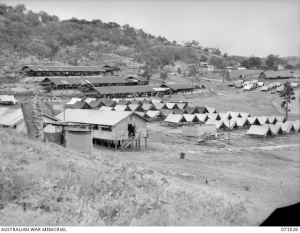 Port Moresby, New Guinea 31/5/44  The New Guinea Details Depot located at the site of the old Murray Barracks area.  A majority of the 1,000 men in the camp are from New Guinea hospitals and convalescent camps and are awaiting return to their former units

It seems the ‘twelve or thirteen miles’ they walked was not the whole distance from the camp back to the Training School at Sogeri, but the last part would certainly have been along the ‘Rouna Road’: 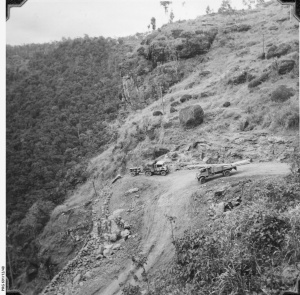 Powerful hot walking…  we could hear the swirl of rushing water

They would certainly have been able to hear the Rouna Falls on the Laloki River… now a major tourist attraction in the area. 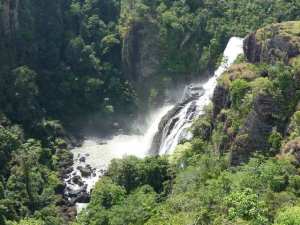 On October 13, the Battalion was involved in action against Japanese positions on ‘the Knoll’ in the valley of the Surinam.  It was a costly encounter, and when added to the previous 3 days, the losses were : A Company – 5 killed or died of wounds, and four wounded; B Company one and three; C company one and two; D company four and 30.  At 1600 hours Brigadier Eather advised the CO his unit would be relieved by the 2/31st battalion that night…  The advance party of the 2/31st, led by Lt-Col Murray Robson, arrived at the unit below the first knoll at 1800 hours.  On until 2300 hours the difficult business of ‘relief in the line’ was carried through….. The relief was without incident…. On the 15th, with 2/31st reporting no sightings or movements of Japanese, and 21st Brigade and the Independent Companies clambering a bout the lower jungle slopes of Shaggy Ridge and Mt Prothero – as well as no contact north-west beyond Kesawai – it was apparent that the Japanese had withdrawn from the Ramu foothills back up into the 500-feet Shaggy/ Prothero/ Kanmiryo complex.   (Foot soldiers p348 – 350) 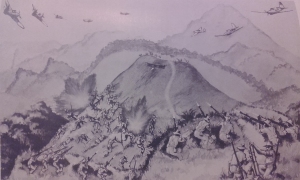 16 platoon, D Company, attack on the Knoll at Surinam New Guinea, 13 October 1943 : a sketch by Terry Cook from a field sketch drawn by Sergeant W Crooks just after the attack.  (Foot soldiers p 350)

This entry was posted in Papua New Guinea, training, Uncategorized and tagged training. Bookmark the permalink.