Some higher authority…controlling this show 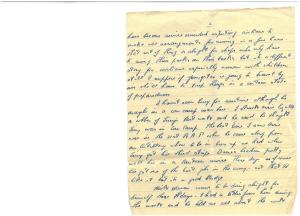 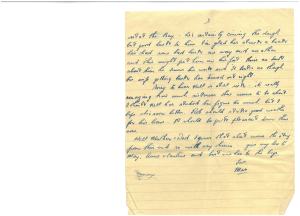 After six weeks mucking around – attached here and detached there without knowing who was who or why, we’ve started the school I told you of in earlier letters.  We arrived at the joint on Sunday and started work on Monday morning..  I’m not putting the school address on my letters just yet as I may be going back up to the unit in a few days.  There’s a big possibility of the chaps from our show being recalled so as it only makes a few days’ difference to incoming mail will continue to use the unit address until I know one way or the other how things are.  The surroundings here are quite pleasant.  Most of the chaps doing the course are good fellows but the work at present is most uninteresting although those who should know say it improves as the course goes on.

I had three letters on Sunday – two from Dad and one from Ivy.  (Dad’s letter of the 27th was written from Melbourne too).  The airways people must have become service minded, expecting civilians to make all arrangements for moving in a few hours.  That sort of thing is alright for chaps who only have to swing their packs on their back but it’s a different story for civilians especially women with children.  Still I suppose if Youngster is going to travel by air she’ll have to keep things in a certain state of preparedness.
I haven’t seen Tiny for some time although he maybe in a con camp near here.  I struck Ossie Eizelle a cobber of Tiny’s last week and he said he thought Tiny was in con camp.  The last time I saw Ossie was in the 31st RAP when he came along from an artillery show to be in a beer up we had when Tiny got his third stripe.  Ossie headed ‘em pretty well – he’s in a canteen service these days so of course he’s got one of the best jobs in the army.  Not that I’d like it, but it’s a good bludge.

Mick Mason seems to be doing alright for himself these days.  I had a letter from him during the week and he told me all about the work out at the  Bay.  He’s certainly coining the dough but good luck to him.  I’m glad he’s struck a break.  He’s had some bad luck one way and another and this might put him on his feet.  There’s no doubt about him he knows his work and it looks as though his wife getting back has turned out right.

Sorry to hear Nell is still sick.  It’s really amazing how much sickness there seems to be about.  I think Nell has studied her figure too much but I hope she’s soon better.  Rob should strike good weather for his leave.  It should be quite pleasant down there now.

Well Mother & Dad I guess that about covers the story from this end so will say cheerio.  Give my love to May, Anne & Carline and best wishes to the boys.

…A big possibility of the chaps from our show being recalled …!?

This comment indicates just how far out of the loop Dad was, and/or how easily rumours were spread.  There’s nothing in unit diaries or histories to suggest the men of the 25th Brigade (2/25th, 2/31st and 2/33rd Bns) who were at that time involved in action in the Ramu Valley might be recalled.  In fact on the night of October 10, the 2/33’s B Company carried out a successful night attack on the Japanese company dug in on the summit of ‘feature 4100’ – an attack which Bill Crooks says ‘should have been ranked after that of the later attack and capture of Shaggy Ridge and Pallier’s Hill (but which is) rarely, if at all, mentioned outside the battalion.’ (The Footsoldiers p 332) 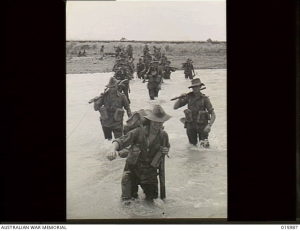 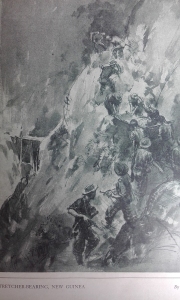 According to The Footsoldiers (p331)- in the morning light, ‘it was obvious the Japs had thought it impossible for anyone to attempt climbing the near vertical eastern lip and must have been dumbfounded when it was done at night.’

The NGF Training School Diary shows that on 10 October, 61 NCO’s were marched in for Junior Leaders School no. 12, and that this school commenced on October 11.   This school lasted 4 weeks but Dad’s record shows he was not transferred back to the unit until 14 January 1944.  I assume this means he was participating in other schools and/ or taking on the role of instructor.  Being very familiar with the operation of the Bren gun, for example (having been part of the Bren Gun Carrier platoon since Syria) he could have instructed others, as this sergeant is doing:

AWM 6227840 4 November 1943  No. 9 section, 3rd platoon of Junior Leaders course being instructed in the operation of the Bren Gun at the NGF Training School.  Sgt A T Hill Instructor. 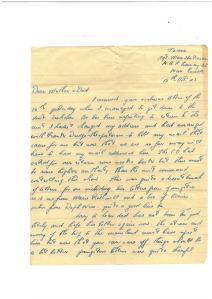 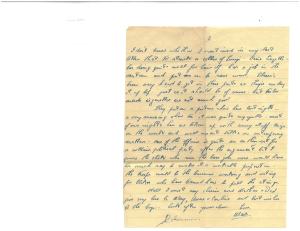 I received your welcome letter of the 10th yesterday when I managed to get down to the unit echelon.  As I’ve been expecting to return to the unit I hadn’t changed my address and had arranged with Frank Dredge – the postman – to hold any mail that came for me but now that we are so far away will have to have my mail addressed here.  The CO had asked for our return some weeks back but there must be some higher authority than the unit command controlling this show.  There was quite a decent bunch of letters for me including two letters from Youngster and one from Marie Rothwell and a box of liquorice tubes from Daph Wise – quite a good line too.

Sorry to hear dad has not been too good lately and hope he’s better again now.  The strain and worry of the trip to the mainland must have upset him but how that you can ease off things should be a lot better.  Youngster’s letters were quite cheerful although she’s having a power of bother trying to cope with income taxes and look after the baby.  I haven’t seen anything of Bill.  I didn’t get that far on Sunday and don’t expect to get down again this side of Christmas.  Incidentally that idea about being home for leave for Christmas is right out.  The way things are shaping I’ll be lucky if I get leave before next Christmas.  Still you never know: anything can happen these days and it’s a nice thought to keep in mind.  McQuiltan must have the game sewn up to be back on leave again.  He’s been home nearly all this year hasn’t he?  I wouldn’t be surprised if they send Tiny back again too – he’s had Malaria again – pretty bad too I believe and as he looks like being in and out of hospital might get a job on the mainland.  I struck one of the blokes out of the platoon when I was down on Sunday.  He said Jim and Viv were going along well.  The platoon hadn’t been committed at all when this chap came back about ten days ago but as the battalion have been in some heavy stuff since they might have been used this time.

I don’t know whether I mentioned in my last letter that I’d struck a cobber of Tiny’s – Ossie Eizelle – he’s doing quite well for himself – has a job in the canteen and put me on to some weed.  Tobacco’s been very hard to get in these parts as they’re sending it up top – just as it should be of course – but tailor made cigarettes are not much good.

They put on a picture show here last night – a very amusing show too – it was quite enjoyable.  Most of our nights here are taken up with army stuff – quizzes on the work and well meant talks on contemporary matters – one of the officers is quite an enthusiast for a soldiers’ political party after the argument, but I guess the clique who run the base jobs now would have too much say to make it a workable proposition – the troops would be the bunnies working and voting for blokes who have learned how to pull the strings.

Well I must say cheerio now Mother & Dad.  Give my love to May, Anne & Carline and best wishes to the boys.  Look after yourselves.  Love

The CO asked for our return some weeks back

According to The Footsoldiers, in the days following the Liberator disaster (see post dated   10 September 1943), orders were issued that another D company was to be raised as soon as possible.  The men were to be trained as a company and were to be ready to move forward by September 25th.  All men who could be spared from essential duties at LOB…plus any of those with minor injuries who could leave hospital, and any volunteers of the 2/33rd been of the old carrier platoon who had been detailed to the 7th Division Carrier Company when at Ravenshoe, would constitute the new company.

Dad had already been transferred to the Training School when the disaster occurred, but I’m sure he would have wanted to join this company.  He still (in this letter) believes the CO has ‘asked for our return’ and wonders what other powers are at work.  As his Carrier platoon mates Jim and Viv were clearly with the unit, I’m not sure who else is included in the comment ‘OUR return’.

The Battalion have been in some heavy stuff

It seems he has now caught up with what’s been happening in the north (see photos etc above).  This map is from the 1944 AWM publication Jungle Warfare.