News from around the world thanks to Guinea Gold 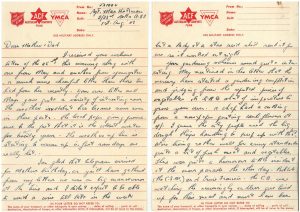 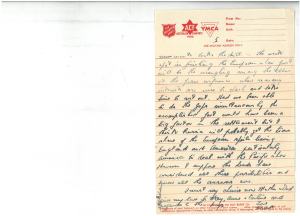 I received your welcome letter of the 25th this morning along with one from May and another from youngster – a much more cheerful letter than those I’ve had from her recently.  Your own letter and May’s gave quite a variety of interesting news.  The weather in Hobart had become news even in these parts.  The local paper giving prominence to the fact that it is the coldest winter for twenty years.  The weather up here is starting to warm up in fact some days are really hot.

I’m glad that telegram arrived for Mother’s birthday.  As you’ll have gathered from my letters we were on big manoeuvres at the time and I didn’t expect to be able to send a wire till late in the week, but a lady at a store said she’d send it for me so it worked out right.

Your gardening schemes sound quite interesting.  May mentioned in her letter that the Mercury have started a gardening competition and judging from the reported prices of vegetables it’s little short of imperative to grow your own.  A chap had a cutting from a newspaper quoting cauliflowers at 4/-.  I guess the city people need the big dough they’re handling to keep up with that.  We’re living rather well for army standards – quite a bit of fresh meat and vegetables.  There was quite a humorous little incident at the mess parade the other day.  Bob Cole (the CSM) and Ernie Francis – the CQ – were watching the seemingly endless queue lined up for their meal and must have been amused at something because they both laughed.  The cook walked over looking very officious and said – “Sar-Major don’t laugh at the customers – we’re trying to keep them”.  That wouldn’t sound funny to anyone who didn’t know the army but it was to us.

The election seems to be assuming big proportions now.  They’re issuing us with impartial extracts of the policy speeches but the mob are not very interested.  In fact I doubt that they’ll even bother about giving us a vote.

We had a very interesting day’s outing one day last week.  It was quite a change from routine stuff.  We went by trucks through country and over roads that seemed quite pleasant as passengers but at other times they’ve been anything but pleasant.  The job was very interesting too, combining features reminiscent of Trafalgar days with very modern stuff.

One of our blokes was a reporter in civvy times and a couple of his mates – war correspondents – blew in to see him the other day.  We had quite an interesting talk with them.  They’d been around a lot and were able o tell some good tales and tell them well.  That’s the racket I’d like to be in.  It would suit me right down to the ground, however we can’t pick our jobs these days.

The news from Italy sounds particularly good and should give a great impetus to the Allies in Europe – a solid landing with the accompanying efforts of the various underground movements looks the drill.  The weak spot in finishing the European show first will be the wrangling among the Allies at the peace conference where so many interests are sure to clash and take time to sort out.  Had we been able to do the Japs simultaneously the accomplished fact would have been a big factor in the settlement but I think Russia will probably get the lions share of the European spoils leaving England and America particularly America to deal with the Pacific show.  However I suppose the heads have considered all these possibilities and know all the answers now.

I must say cheerio now Mother & Dad.  Give my love to May, Anne & Carline and regards to the boys.

I assume this is a reference to Guinea Gold – 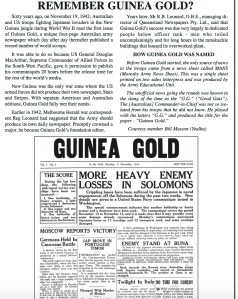 The Guinea Gold newspaper is published for Australian and American troops. Two editions are published, the Australian edition carrying Australian home news, the American edition carrying one page of American home news. A four page sheet, each edition carries three pages of general news interest. This material is mainly rewritten from newspapers. At left is Staff Sergeant John Eyre of Canberra, ACT, taking papers from the press. Stacking papers is native boy Seri Eno. In the background oiling machine is Corporal M. Nicholas of Sydney, NSW. The serviceman oiling the machine has also been identified as Private J W Dormer and Corporal Nicholas is feeding the paper into the press

Imperative to grow your own

image from Yates seed booklet- What and when to sow: a real war job

Although from some time later, this is a mess queue in the Port Moresby area.   AWM 073524

The government did its best to ensure that all those on active service were able to vote.  Details of procedures to be followed were set out in the Commonwealth Electoral (War time) Act no.27 of 1943: http://www.austlii.edu.au/au/legis/cth/num_act/cea1943271943342/ and distributed to all units – (these items from the unit war diary July – Sept 1943 AWM RCDIG1027241) 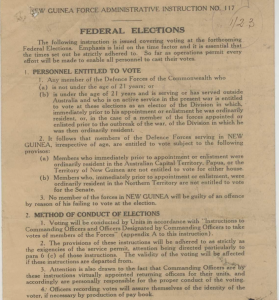 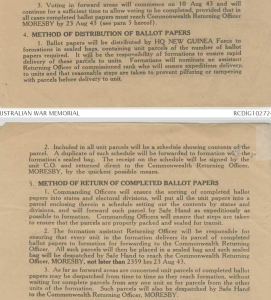 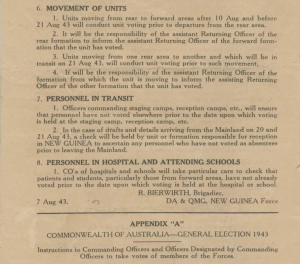 Also from the unit War Diary – a return of votes for each state/ electorate : 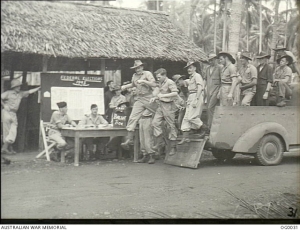 Milne Bay, Papua.  RAAF airmen arrive in the back of a utility truck at the outdoor ‘polling booth’ to cast their votes int he Australian Federal election.

AWM 015670  Goodview Junction, New Guinea. c. 1943-09. Australian troops within half a mile of the Japanese front line, being watched by American colleagues, as they prepare to vote in a Federal election. Consulting an election supplement of the Army newspaper Guinea Gold is Private Alec Salter of Cohuna, Victoria, with Second Lieutenant Ray Nelson of Lacrosse, Wisconsin, seated holding the paper.

I wonder whether ‘one day last week’ was prior to that – i.e. while still in Queensland – as according to the Battalion diary (RCDIG 1027241 ) the only activities from July 26 – 31 were –  Unloading and sorting of stores and equipment and general reorganisation.  Training only light, consisting of short route marches and general recapitulation.   However, the reference to ‘roads that seemed quite pleasant as passengers but at other times they’ve been anything but pleasant’ suggests it might have been into the foothills of the Owen Stanleys or even towards Milne Bay.

The news from Italy

The Melbourne Argus reported on Friday July 30 1943  that General Eisenhower on behalf of the Allies had issued an offer of peace with Italy, if the government would agree to cease all support for the Germans and to an exchange of all prisoners of war.  (http://trove.nla.gov.au/newspaper/article/11799000/623504)   The Italian Governments signed an armistice on September 3 but this was kept secret until a week later   (http://history.howstuffworks.com/world-war-ii/allies-bomb-northern-nazi-germany8.htm).   The Italian dictator Mussolini had by this time been arrested and imprisoned in a hotel in the Abruzzi mountains but he was freed by German troops within days of the signing and set up a puppet government based in Salo.

This entry was posted in Australian, Food and Drink, The course of the war, training and tagged growing vegetables, Guinea Gold, peace negotiations, war correspondents. Bookmark the permalink.