Pretending to be somewhere else… practically no news

Just a few lines hoping to find you happy and well.  The mail came along so quickly last week that it seems quite a while since I head from you.  I had a letter from Ivy on Tuesday and things seem to be going very badly with her and the baby.  It’s certainly a tough proposition for her with Bill away.  The one bright feature of her letter was Fergie’s going.  That should be a weight off her mind.  Wood seems to be a big problem for her.  I wrote to Mr Sturrock yesterday and asked him if he could get her some wood.  He’s in the timber game and might be able to send her some face cut stuff without incurring the displeasure of the rationing people – except for doing a bit of washing wood’s the least of our worries.  In fact it’s pretty warm – even at night we sleep on a blanket with nothing over us at all.

The chap who took Tiny Schultz’s job in the RAP was round here yesterday.  He’d just had a letter from Tiny saying he’d had another bout of Malaria and done his WO’s job at Campbell Town – went to Evandale to a spread and the Malaria came on and he had to stay, so they caught up with him for being AWL.  He reckons he’s very sick of being down there and would like to get back to his unit but that’s a bit hard to swallow.  I think Dick’s had too much to want to go back.  This last attack might do the job and get him right out but it takes some working these days.

The first CO of the unit Hamburger Bill was round to see us on Wednesday – not us, but the CO.  It’s the first time we’ve seen him since he left us over two years ago and to the majority he’s only a name although his passing through the lines occasioned a torrent of reminiscences among the old hands.  Charlie Mene was quite bucked when he came over and spoke to him – Charlie was always Hamburger’s curly headed boy – the pride of the Regiment.

We went to a big open air picture show last night – an extra good show too – Desert Victory  and Seven Sweethearts.  The desert show was particularly good and the commentary perfect.  There was a  short glimpse of the glamorous ninth doing their stuff in the early stages of the film.  I suppose I’d better not tell you about it as you’ll probably get a chance to see it yourselves.

There’s practically no news from this end.  Nothing ever happens (much) and the old routine of camp life and training doesn’t vary much.  The mob are just as mad as ever if not more so.   When I asked an officer to tell me something to write about he said ‘if you can’t think of anything to write I’m bloody sure I can’t tell you” – he said you used to be able to write ten pages without any trouble and though I don’t remember doing so, must be slipping back these days as two pages are about my limit now – maybe the passing show has lost its interest but whatever the cause I can’t do the job now.

The honourable James is quite well and wishes to be remembered to you.  One of his tent mates got a letter from a WAAF and Jim, Kong and Viv went to work on drafting a reply.  The result you can well imagine was the greatest dissertation of Bull ever you saw in your life.

I must say cheerio now Mother & Dad.  Give my love to May, Anne & Carline and best wishes to Laurie and the boys.

Dad’s group left Townsville on the Katoomba July 23 and disembarked at Port Moresby on July 26. 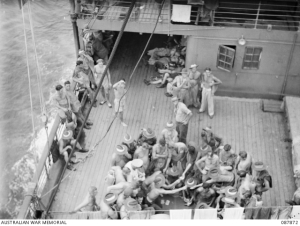 AWM 054678 Cairns, July 26 1943.  Troops of the 2/8th Australian Field Ambulance, 20th Australian Infantry Brigade, settle down aboard ship en route for the battle area.    (Another vessel – but presumably conditions were similar on board the Katoomba.)

Where were they, exactly?

The Footsoldiers (p258) describes the unit’s campsite : …it was a scattered and tented camp astride the Rigo Road.  But as this was active service preparation, no stretchers were built nor in fact were any settling-in procedures allowed.  The cookhouses were simply tent-fly’s and for meals companies simply lined up and after issue sat down and ate their meals wherever they could.  The Pom-Pom area was a dreadfully uninteresting piece of landscape.  It lay in a narrow valley bounded by low, steep, grass-covered hills that ran astride the narrow dirt road all the way down to Bootless Inlet….About the camp area heat and wear had cleared the dress down to bare ugly earth.  For the next month and more this not uninteresting area was our hard training ground.

The parade ground at the Pom-Pom camp

I was initially surprised that the address on this letter did not include NG (New Guinea) as it had during the unit’s previous deployment.  However orders dated 29 July (ref Bn diary – RCDIG1027241) included the following :

Comd’s will ensure that the following info is promulgated to all ranks:

ADDRESS:  The ‘AUSTRALIA’ address will still be used as the address of this unit.  All info contained in letters will be given from the point of view of the unit still being in its last permanent camp.  No info as regards movement or change of location will be included until after the expiration of one month from the time of arrival in NG or until after the unit has moved into action.

Wood’s the least of our worries.

Regarding the situation Ivy was experiencing – the AWM resource booklet available here https://www.awm.gov.au/sites/default/files/education/box/05_res_book.pdf  –   confirms that Melbourne and Sydney suffered a shortage of firewood, a serious problem for the many homes which relied on burning wood to heat, cook and wash.

From The Footsoldiers (p259) – …Thousands upon thousands of Americans were seen about Moresby.  Indeed, many of the American units were along this same road.  One in particular, 8 Service Group US Air Force, was a regular nightly stopping place for 25th Brigade as it boasted a large cinema screen with a changed nightly programme…..

– poster for the movie Seven Sweethearts (1942)

This entry was posted in escapades, relaxation, fun and games. Bookmark the permalink.