My small circle – big camp fires and balancing the books 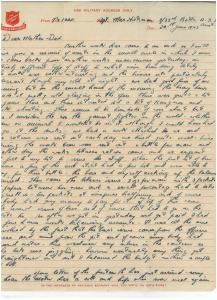 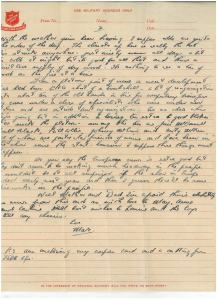 Another week has come to an end so I will give you a resume of events in the small circle in which I move.  We came back from another week’s manoeuvres yesterday – an entirely different type of stuff to what we’ve been doing lately.  The work was rather interesting and the bivouac site particularly pleasant though very cold at night.  We had good fires of an evening but in the small hours of the morning the heavy dews made it pretty cold sleeping in the open spaces.  There was quite a lot of game there and those interested did a bit of kangaroo and duck shooting.  There seem to be hundreds of roos about but as I consider the roo the gamest fighter in the world, whether man or animal, I wouldn’t be in it – although I would have had a go at the ducks.  We had a cook attached to us and his rations were sent out each day.  We lived quite well.

Twice during the week beer was sent out – a bottle per man – and another day the week’s tobacco ration came and as sergeant it fell to my lot to issue the stuff.  When the first lot of beer came a few of the mob still had a few bob and were able to pay for their bottle, the boss and myself making up the balance required.  Then came the tobacco issue – 3oz per man with 3 packets of papers between two men and a small percentage had to take cigarettes – ten packets at ninepence halfpenny – and of course nobody had any money to pay for it.  On top of this came the second issue of beer and of course that had to go on the slate too.  So after we got in yesterday and got paid I had a few hours’ work balancing accounts.  It was all the more involved by the fact that the boss’s issue came from the officers’ mess and mine from the pit, and of course everybody had pound notes.  There wasn’t even any silver in the canteen so she took some juggling.  However eventually everything got straightened out and I balanced the budget within a couple of bob.

Your letter of the fourteenth has just arrived – sorry to hear the Mater has a cold and hope she’s soon well again.  With the weather you’ve been having I suppose colds are quite the order of the day.  The climate up here is really the best I’ve struck anywhere – just nicely warm all day, a bit too cold at night but it’s good for all that and there’s a limitless supply of dry wood.  It’s nothing to see a ton of wood on the fire at a time.

From a platoon point of view a recent development has been little short of a bombshell – a bit of reorganisation puts about ten of the old hands in line for compulsory transfers they come under a class of specialists who come under new status and are outside unit organisation.  I’ve no idea when they’re going but in addition to losing ten extra good blokes it’ll wreck the platoon.  Among the ten are Jim McDonnell, Bull Black, Bill Collis, Johnny McGrow and Scotty McKen – all of whom are particular friends of mine and have been in the show since the start.  However I suppose these things must happen.

As you say the European news is extra good but they don’t seem to be making much headway in the Pacific.  I wouldn’t be at all surprised if the show in Europe ended early next year and then I guess there’ll be some fireworks in the Pacific.

Well Mother and Dad I’m afraid there’s absolutely no news from this end so with love to May, Anne and Carline – best wishes to Laurie and the boys, I’ll say cheerio.  Love – Max.

PS  Am enclosing my coupon card and a cutting from Table Tops. 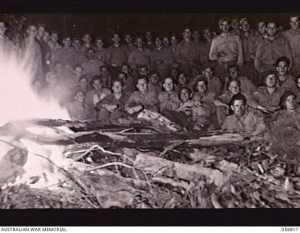 AWM056817 – men from another battalion training in the same general area – gives an idea of the size of the ‘camp fires’. 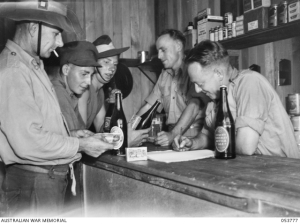 AWM053777 – a sergeant issues beer and tobacco and keeps tabs – again, this is another unit and clearly in camp rather than on manoeuvres, but gives an insight into the process.

I can find no mention of redeployment in the service records of the men named here.  However, Alan Threlfall offers the following insight –

On 13 February 1943, LHQ notified all formations and units under command that three types of divisions would now exist: armoured, standard infantry and jungle infantry.  The first formations to undertake the changes would be the 5th, 6th, 7th and 11th Divisions…..The CGS, General John Northcott, said the new organisation would ensure that ‘all units, sub-units, transport and equipment which are not essential for general operations in jungle conditions have been eliminated from Div organisation’.  For the combat arms, the biggest practical changes would occur in the infantry battalions and their primary supporting arm, the artillery.  Two of the platoons in the Headquarters Company of an infantry battalion, 2nd (anti-aircraft) and 4th (carriers) were no longer required.  A Divisional Carrier Company would be created and carriers allocated as needed.  An MMG platoon would be created for each battalion, equipped with four Vickers MMGs and the mortar platoon’s armament would be increased from four to eight 3-inch mortars.  This was an attempt to increase the self-sufficiency and firepower of the infantry battalions.  These changes would mean a reduction in personnel from the standard war establishment of 910 to approximately 800. (Threlfall – Jungle Warriors – pp 181-182)

William Crooks in The Footsoldiers adds the following:    A vast reorganisation of the Army was taking place….. in our Battalion 4 platoon of HQ Company (the carriers) had been disbanded, and in its place a machine gun platoon of four Vickers MGs was organised.  Some of the old carrier men either elected or were detailed to go to a carrier company being organised as a divisional unit….In fact almost the whole of HQ company was reorganised and had to set about a complete new training programme.  The establishment of an infantry battalion then became 33 officers and 772 other ranks – a reduction of some 60 men on our establishment of late Middle East days…(p255-6)

This could perhaps have been reports of the ‘dambusters’ bombing raids in the Ruhr valley, or of the growing expectation of an allied invasion of parts of Europe.  The invasion of Italy in fact began with the battles for Sicily in July 1943. 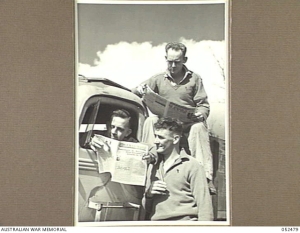 This entry was posted in Carrier platoon, organisation, The course of the war, training and tagged reorganisation. Bookmark the permalink.