Quite an eventful week in a modest sort of way 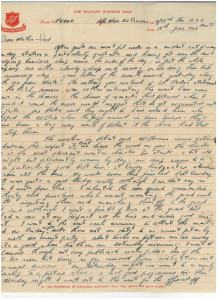 After quite an eventful week in a modest sort of way Sunday strikes a particularly quiet note and having got over the devil-dodging business sleep seems the order of the day – in fact the whole company are either already asleep and snoring or are doing their best to encourage sleep.  Your letter of the seventh arrived yesterday along with one from Mick.  The cutting you enclosed of Col Clarke’s statement at the RSL dinner was rather interesting – he must have some sons in the chocoe’s.  The chorus of remarks that followed when I passed it round the mess would suggest that he get acquainted with the facts.  One bloke said they ought to have asked him who stopped the Militia when the Japs arrived in New Guinea – they’d have been a long way south of Hobart if the choc’s had had to stop them.

The weather in Hobart and Melbourne seems particularly bad – in this respect at least we have the wood on you.  The climate here is the most pleasant winter climate I’ve struck – a bit cold by night but pleasantly warm by day.  Our camp seems to be in a particularly good belt here.  At Divvy headquarters it seems to rain all the time.  My week down there finished last Tuesday.  It was quite a good bludge really, although I couldn’t say so when I wrote from there.  I inherited the guard commander’s authority and privileges which meant mounting the guard each night, inspecting them and marching them off to the guard tent and although I spent a pair bit of time at the guard tent I had a car at my disposal all the time and made good use of it.  I went to the unit each morning to collect the mail and on Friday night took those not on duty to a concert put on by the sixth div concert party about twelve or fifteen miles away – quite a good show too.  Then on Saturday morning I went to a famous though not very publicised waterfall – one of the best I’ve seen – but being so far removed from civilisation isn’t very well known.  On Saturday night we went to a nearby township to a picture show – a real good programme too.  Then on Monday night I went out to the unit for the official opening of the log cabin by the CO.  Beer was plentiful and the ceremony went without a hitch.

Tuesday was our big day – the day we celebrate – and thanks to the adjutant and RSM the mob were relieved from he guard at eleven o’clock in the morning although I had to stay till the new guard took over a bit after four int he afternoon.  Still as the sergeants show didn’t start till the evening I didn’t miss much.  There was a regimental parade in the morning with an address by the CO, a big spread for midday mess for the chaps – it incorporated the Christmas dinner they didn’t have – poultry, roast pork with apple sauce and vegetables and plum pudding to follow.  The afternoon was devoted to sport including the final of the inter-company football (Rugby) in which our company gained a very decisive win after a well contested game.  Then in the evening came the grog.  The issuing out arrangements were not very satisfactory and put a bit of a damper on an otherwise good day.  We had our big mess for dinner at six thirty – an extra good show – the cook absolutely excelled himself and although the meal would have found favour with gastronomic connoisseurs, gluttony was the order of the day.  A short digestive lapse after the meal we adjourned to the cabin and settled down to some steady drinking – that got more and more unsteady as the night wore on.  One of the blokes put on a bit of an act as we were going home – he fell over and started wrestling with himself, calling out all the time “let me up, let me up” and there was no one within twenty yards of him.

Yesterday morning we had the doubtful honour of a visit from the Minister for the Army.  He arrived with retinue of brass heads – Major Generals, Brigs and Gawd knows what – and after shaking hands with all the officers and condescending to speak to a few of the chaps delivered a fifteen minute oration that reeked of electioneering from start to finish.  I didn’t like his style at all – a bloke who was a conshie when he could have fought and who before Japan came into the war was one of our bitterest opponents – I mean one of the AIF’s bitterest opponents – ‘five bob a day killers’ – and then comes filling everybody’s pockets up – well he doesn’t cut much ice.  He started from the Generals and although at times he got his ranks a bit confused he crawled right down to the privates.  Told us nothing we didn’t know and drove away beaming with satisfaction.

Ack Hallam left on Thursday on his way south.  He didn’t expect to go for another week but got movement orders that allowed no time to spare.  He told me he’d come and see us before he left but sent word that he’d had to go very sudden.  Our officer is leaving soon too – he’s been manpowered out by a big industrial show.  Lucky bugger.  They gave him half an hour to make up his mind and even then the CO practically had to tell him what a bloody fool he was.  If they offered me half an hour to make up my mind I’d have twenty nine minutes and fifty nine point something seconds to spare.

Well I’m afraid that’ the Griffin for the week Mother and Dad so with love to May, Anne & Carline and regards to Laurie and the boys I’ll say cheerio.

PPS Jim McDonnell send his best wishes and in spite of local conditions said to assure you he’s getting his share of nourishment.

PPS Please send me some d…. or whatever those press things are.

Ongoing antagonism towards members of the Militia

It seems Dad and his mates were still completely ignorant of the role that militia battalions in attempting to repulse the Japanese invasion of Papua/ New Guinea.  Militia battalions had been at the forefront in the battles for Kokoda, Milne Bay and Gona/ Sanananda.  It was not possible to join the AIF until you were 20 years old but you could be conscripted at age 18. This led to much of the bitterness about the term “Chocko” with blokes that were labelled as ‘not willing to fight in the AIF’ but who could not legally join the AIF yet were in uniform, fighting, dying and getting wounded side by side with AIF blokes. (http://www.diggerhistory.info/pages-conflicts-periods/ww2/pages-2aif-cmf/militia.htm) 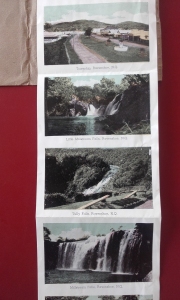 The waterfall might have been Millstream Falls – most likely not Tully Falls though these are also in the ‘Camera Views’ fold-out that Dad sent home.  This item of mail was clearly approved by the censor (signature bottom left) so it is interesting that after it was sent, the CO issued routine orders specifically forbidding such items being posted as they indicate the area in which the Bn is operating.  See Bn Diary – Routine Order for 13 June 1943  (RCDIG1027240)  :

The game depicted here involved another unit (2/5th Battalion) and was later in the year but also on the Atherton tableland – at Wondecla- so the outlook would have been similar.

After the big mess, adjourned to the cabin 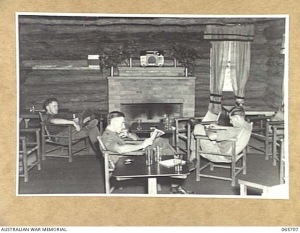 Photo is of an officers’ mess log hut – but I’d like to think Dad’s might have come close in comfort and appointments, especially the fireplace/ chimney!  The caption says that all chips, tables and internal fittings which are made from hessian palliases with green trimmings (ends of unserviceable mosquito nets) are the work of unit personnel.

The Minister’s oration reeked of electioneering

A Federal election was scheduled for August, so any politician would naturally be ‘electioneering’.  It was true that Frank Forde (who was Deputy PM under John Curtin as well as his Minister for the Army) did not enlist to fight during World War I.  He campaigned strongly against conscription during that war.  However by the time of the Japanese invasion of PNG he was member for Capricornia in Queensland and very conscious of the threat the Japanese posed to Australia.  He became a strong and vocal advocate for both the troops and the leaders of the Australian Army.  On several occasions he was also acting Prime Minister.  http://primeministers.naa.gov.au/primeministers/forde/before-office.aspx