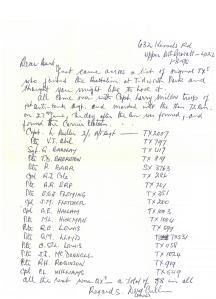 The first of many re-0rganisations

From The Footsoldiers (p7):

…”The last of the British troops were evacuated (from Dunkirk) on 18 June.  Most brought their rifles and personal equipment but transport and guns and tanks were lost.  This was the situation on the morning of 18 June, when the 18th Brigade began making its camps.  The artillery had no guns and little transport; the infantry had only rifles and a few Lewis and Vickers machine guns.  The large number of troops, all lacking necessary equipment, and divorced from the units – mainly the 6th Division – which they were intended to support – made it imperative that the force now in England be re-organised…..It was decided by Major-General Wynter, the GOC, to form another infantry brigade…on the morning of 26th June, it was simply a matter of a list of names being read out; selecting the essential gun crews to remain ; then splitting the remainder in two.  The right half were told to pack their gear and assemble on the main road….for the men who had joined together and in most cases had been together for nearly eight months this was indeed a depressing day…..Most of the men slept the first night in then open, having had a cup of tea instead of a meal and only groundsheets and greatcoats as beds.”

Dad didn’t comment on the specifics of the Battalion’s formation until many years after the war, when he wrote

Soon after our arrival at Salisbury Plains we were made aware of the gravity of the war situation.  The fall of France and the evacuation of Dunkirk with the consequent loss of equipment made it necessary for those in authority to re-organise the Australian contingent.  In the process several units were partially disbanded.  The Anti Tank Regiment was one such unit and after a short period of training in the use of Vickers machine guns, the group was split up into three platoons, one platoon being assigned to each of three new battalions being formed from the disbanded units.  These three battalions were designated 70th, 71st and 72nd battalions under British command.  The platoon to which I belonged was integrated into the 72nd Battalion.

The letter above (as picture, and below as transcript) from Doug Cullen (VX11589) to ‘Bert’ was in Dad’s collection of papers…with no note as to how it came to be there – but it describes one small part of the story of the forming of the Battalion: specifically that of the Carrier platoon to which Dad belonged : it  was part of Headquarters Company.

Just came a cross a list of original TX’s who joined the Battalion at Tidworth Park and thought you might like to have it.  All came over with Capt Larry Miller’s troop of 1st Anti Tank Regt, and marched into the then 72 Bn on 27th June, the day after the Bn was formed, and formed the Carrier Platoon.

During the early years of the war all Australian infantry battalions were authorised a platoon of Universal Carriers. The Carrier Platoon’s main roles were to transport the Battalion’s crew served weapons and conduct reconnaissance. The carriers were also occasionally used to transport infantry.

The Universal Carrier, also known …as the Bren Gun Carrier is a common name describing a family of light armoured tracked vehicles built by Vickers-Armstrong. Produced between 1934 and 1960, the vehicle was used widely by British Commonwealth forces during the Second World War. Universal Carriers were usually used for transporting personnel and equipment, mostly support weapons, or as machine gun platforms. With some 113,000 built in the United Kingdom and abroad, it is the most produced armoured fighting vehicle in history….

The carrier put the driver and commander at the front sitting side-by-side; the driver to the right….The hull in front of the commander’s position jutted forward to give room for the Bren gun (or other armament) to fire through a simple slit. To either side of the engine were two areas in which passengers could ride or stores be carried. 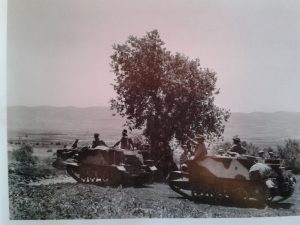 A photo of carriers in action in Syria from the Australian War Memorial : accession no. 008210.

This entry was posted in Carrier platoon, Letters to/ from others, organisation, training, Uncategorized, weapons, armaments, equipment and tagged carrier platoon, formation of battalion. Bookmark the permalink.