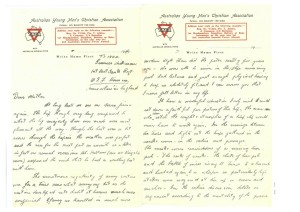 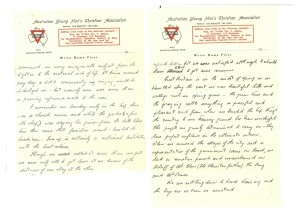 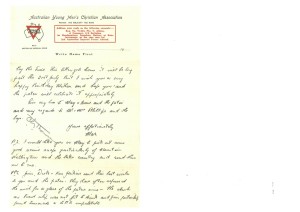 Letterhead: YMCA – including instructions on how to address mail, and the invocation to Write Home First

At long last we are on terra firma again.  The trip though very long compared to what the big majority have ever made was most pleasant all the way.  Though the heat was a bit severe through the tropics the weather was perfect and the sea for the most part as smooth as a lake.  In fact on several occasions Ac Hallam (an ex Kings Cup rower) expressed the wish that he had a sculling boat with him.

The monotonous regularity of army routine was for a time somewhat annoying but as the routine developed into habit it became much more congenial.  I fancy we travelled in much more modern style than did the pater twenty five years ago.  We were able to swim in the ship’s swimming pool, had lectures and just enough physical training to keep us absolutely fit, and I can assure you that I never felt better in my life.

It’s been a wonderful education.  I only wish I could set down a faithful pen picture of this trip.  The man who can catch the complete atmosphere of a troop ship would never have to work again.  In the evenings between tea time and lights out the troops gathered in the smoke rooms, in the cabins and passages.  The smoke rooms reminded me of a mining town pub – the reek of smoke, the clink of beer pots and the babble of voices rising at times to a crescendo and hushed again to a whisper as particularly high stakes were wagered at two up or crown and anchor.  In the cabins discussion, debate or argument according to the mentality of the persons concerned – on every imaginable subject, from the lighter to the material side of life.  At times around pay day a little community singing would be indulged in – but scarcely ever was more than a passing reference made to the war.

I remember one Sunday early in the trip there was a church service and while the padre (a define old chap) was saying his piece, from the deck below him there came that familiar sound – Two Bob she heads ’em – Two up is certainly a national institution with the Australians.

Though we called at more than one port we were only able to get leave at one because of the shortness of our stay at the others.  [the last 4 lines of this page have been torn off – presumably censored]  ….reports better but we were satisfied although I should have liked to get some souvenirs.

Great Britain is in the midst of spring [actually it was summer].  As we travelled along the coast we saw beautiful hills and valleys rich in spring grass.  The green trees and the grazing cattle – everything so peaceful and pleasant and from when we landed the trip through the country to our training ground has been wonderful.  The people are grimly determined to carry on – they have perfect confidence in the ultimate outcome.

When we arrived the mayor of the city and a representative of the government came on board, we had a muster parade and were welcomed on behalf of Mr Eden (The Minister for War), the King and Mr Bruce.

We are settling down to hard training and the boys are as keen as mustard.

By the time this letter gets home it will be long past the 21st July but I wish you a very happy birthday Mother and hope you and the pater will celebrate it appropriately.

Give my love to May and Anne and the pater and my regards to Mr & Mrs Phillips and the boys.

PS I would like you or May to pick out some good scenic snaps particularly of Mount Wellington and the lake country, and send them on to me.

PPS Jim [McDonnell], Dick [Schultz] and Ken Jenkins send their best wishes to you and the pater.  They have often expressed the wish for a glass of the pater’s wine – the slosh on board ship was not fit to drink and Jim particularly found lemonade a little unpalatable. 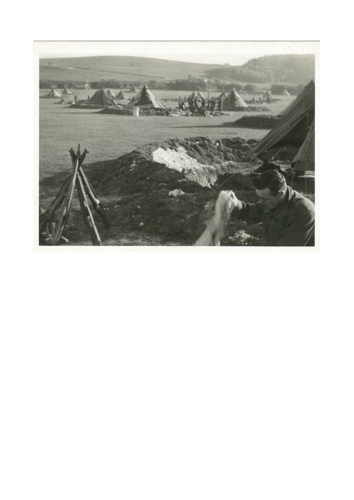 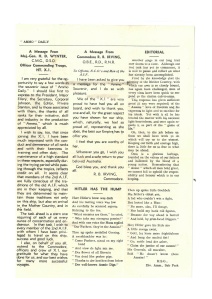 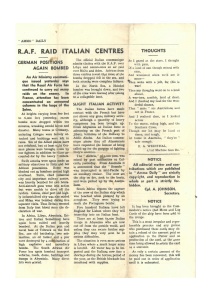 The Convoy Approaches Britain from ‘The Footsoldiers’ (William Crooks 1971, p6) :

A few days out of Britain the convoy was joined by a mighty escort – the battleships Hood and Ramilles , the aircraft carrier Argus, four cruisers, ten destroyers and eight minesweepers.  It was an emotional and stirring sight of the proud Royal Navy.  Overhead, patrolling against submarines was walkways a Sunderland flying boat……The news of 16 June, when France asked for an armistice depressed many on board but on the 17th they were uplifted when the convoy entered the Clyde in fine sunny weather.  The convoy moved in line ahead as each of the Royal Navy escort passed to starboard by only a quarter-mile; the sailors dressed ship; bands playing Waltzing Matilda and each troopship gave three cheers.    It was an uplifting and memorable event, witnessed by the waving people living in the little white houses along the shore.

Dad’s comments, from a personal communication in the 1970’s –

…we sailed up the River Clyde to Greenock.  …Being Sunday morning the church bells were ringing, calling the parishioners to prayer and ringing out a welcome to the Australian troops.  In this delightful peaceful setting it was hard to realise that a few hundred miles away France had capitulated and the British army was caught in a massive pincer movement at Dunkirk and that, even then, evacuation of these forces back to Britain was in progress.

At Greenock we disembarked and boarded trains bound for Salisbury Plains.  This particular train trip was the most pleasant I have experienced and quite distinct front hen mode of transport we were to experience in later days.  This was a wonderful public relations exercise.  Instead of being packed in like sardines there was one man to each window.  As we stopped for refreshments at the towns and cities en route we were greeted with tremendous enthusiasm by the British people.  As a counter to the demoralising news from Europe the arrival of so many Australian troops was a great morale builder.  People really believed there were a hundred thousand men in that convoy.  It was quite reasonable to thin this was true, as train load after train load passed through.  Almost as fast as one train pulled out of a station another was taking its place…..