A fishing trip, a mention in the Griffin and a letter from Gen Vasey

Am a bit late writing this week.  Had intended doing so Friday whilst on guard but the competition is so keen – each company mounts one competition guard a week and the platoon were rather anxious to win so of course I had to be on my toes all the time – and though I started to write several times never actually got to doing so.  How did the birthday go Mother?  Hope you had a happy day with an appropriate evening – which I suppose would be a game of cards.  Anyway, however you spent it I hope it was good.

Received your welcome letter of the 16th on Thursday: made good reading too.  As you say we’ve certainly got the edge on you for weather – we’ve had a week of perfect weather – very cold at night but extra good in the day time.  It’s certainly the best winter climate in Australia.

Have had quite a good round of entertainment round these ridges this week – a concert by a party from the Broadcasting Commission on Tuesday night supported by the unit band which incidentally is booked to broadcast from two Q’land stations soon, so that’ll give you an idea that they’re good.  I suppose one of the best bands in Australia at present.  Most of the items at the concert were either singing or musical numbers and though somewhat spoiled by a few animal acts by fellows who’d got into some grog, was an extra good show.  Then on Thursday night the officers and sergeants messes put on a dance with the WAAF’s and this too turned out a great success – good floor, good music and good dancing.  The WAAF’s brought along three of their friends from the WAC’s- the American women’s show – had a dance with one of them – very nice too – had been educated in Europe and spoke better English than most Australians.  She had a great impression of Australia but not Australian politics.

As I’ve mentioned earlier leave is now practically scrubbed and except for married men resident in the area it’s difficult to get away at all.  However after we’d won the guard competition for the week I saw the adjutant and arranged for Viv and I to get away Saturday evening till tonight as we’d promised to go fishing with the Taits.  We had tea in town and went out to Alderley – that’s near Enoggera round seven o’clock.  They were very pleased to see us as I’d written telling them how things stood.  Put in a pleasant evening with them, stayed the night and today went to Calloundra with them in the car.  The weather was perfect and although I didn’t catch any fish had a very enjoyable day.  They got a couple of dozen good sized bream.   Viv caught five or six but I couldn’t do any good.

Am enclosing a copy of a letter circulated amongst the divvy from General Vasey.  The most popular divisional commander in Australia – always had a friendly nod whenever he net any of the mob.  Would like you to put it away somewhere.  Am also enclosing a copy of the Griffin in which you’ll see that Jim has made the news.  Must say cheerio now Mother & dad.  Give my love to May & Anne & Carline and regards to the Troops.

The Battalion diary notes on July 24 – Unit band gives recital at Greenslopes military hospital.  This hospital had only opened in 1943, and after the war became the Repatriation General Hospital.

The band playing its part in the 7th Division March, Brisbane August 1944

A Dance with the WAAF’s

A dance in Kairi north Queensland in November 1944 : 7th Division personnel, AWAS and others. 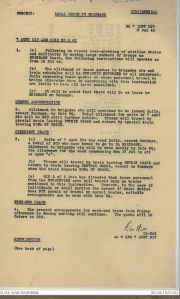 To provide an orientation to where the Taits live, Dad mentions Enoggera – the location of an Army Barracks of the same name that his father was familiar with: it was where he waited with others of the 26th Battalion in June and July of 1915, before embarking for Egypt and Gallipoli.

Major General George Vasey had taken over command of the 7th Division in October 1942.  According to his Wikipedia entry, Vasey’s concern for an rapport with his men was a key factor in his success as a general…. He was hospitalised in New Guinea in February 1944 and again in Melbourne in March, then in June he became seriously ill with malaria and acute peripheral neuropathy, and for a time was not expected to live.  7th Division soldiers in the hospital constantly asked the nursing staff about his progress.  The men called him ‘Bloody George’, not after his casualties but after his favourite adjective.  Vasey’s personable style of command attracted immense loyalty from his men.  “Vasey owns the 7th” wrote a Melbourne journalist “but every man in the Division believes he owns Vasey”.

Melbourne, March 1944 :  This image of Vasey with 2 privates and a WO conveys the ease with which he related to the men

Commander’s Letter to the troops

News from The Griffin

The Griffin of 19 July mentions both Dad and Jim.  Dad is ‘Hick’ who commented on someone (poor old Irish) who tells only two kinds of people – those who ask and those who don’t – and Jim is the member of HQ company who was reportedly trying to emulate the deeds of Tarzan when he fell.

This entry was posted in escapades, relaxation, fun and games, training, Uncategorized. Bookmark the permalink.