Except for a couple that nearly drowned they’re all pretty right. 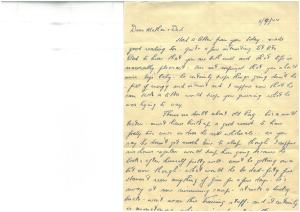 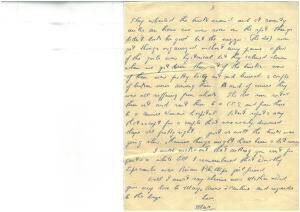 Had a letter from you today – made good reading too – quite a few interesting tit bits.  Glad to hear that you are both well and that life is reasonably pleasant.  Am not surprised that you should miss Ivy’s baby – he certainly keeps things going, doesn’t he – full of energy and interest and I suppose now that he can talk a little, would keep you guessing what he was trying to say.

There’s no doubt about old Pug.  He’s a world beater – must have built up a good round to have forty two cows, or does he sell wholesale – as you say he doesn’t get much time to sleep though I suppose six hours regular would keep him going because he looks after himself pretty well.  Must be getting on a bit now though.  What would he be Dad – forty five?  Haven’t seen anything of Jim for a few days – he’s away at some swimming camp – struck a lucky break – won’t wear this training stuff – and it certainly is monotonous when you’ve done it so often.

We had a bit of a show here the other night that might have serious results, though everything seems alright now.  There was a bit of a get together show for sergeants of the Brigade and attached units had a few drinks at the brigade mess.  Met a lot of chaps from machine gun shows and arty that I hadn’t seen since we were in England.  They’d engaged a hall and invited the girls from one of the women’s services so after we’d had a few jugs we went along and had a great night.  The floor was extra good and the music supplied by some of the battalion band was perfect.  They were a happy crowd and we danced till one o’clock.  Then the show broke up and we went back to camp and the girls went in Tenders to Brisbane – at least they left to go.  We’d just got in to the camp area when a big sedan drew up level with us honking the horn like hell and pulled in to the side of the road.  We pulled in too.  They wanted our MO.  One of the tenders had gone over an embankment where there’d been a washaway.

They wheeled the truck around and at seventy miles an hour we were soon on the spot.  Things didn’t look too good but the wizzer (the doc) soon got things organised without any panic.  A few of the girls were hysterical but they calmed down when we got them out of the trucks.  Some of them were pretty badly cut and bruised, a couple of broken bones (?) among them and of course they were all suffering from shock.  The doc soon sorted them out and sent them to a CCS and from there to a Service Women’s hospital.  Latest reports say that except for a couple that were nearly drowned they’re all pretty right.  Just as well the truck was going slow – otherwise things might have been a lot worse.

I couldn’t make out that cutting you sent for quite a while till I remembered that Dorothy Lipscombe was Brian Phillips’ girlfriend.

Well I must say cheerio now Mother & Dad.  Give my love to May, Anne & Carline and regards to the boys.

Jim… away at some swimming camp

The 25th Brigade Diary indicates that on June 30, ‘Bde party consisting of 2/25 Bn and 50, 2/33 Bn pers and 2 Offrs  and 11 Ors from Bed HQ left for PT camp.   There is a wonderful series of photos of the beach training (though none of actual swimming) in the AWM collection – items AWM 067678 – AWM 067417.   The Brigade diary contains the following description of the ‘PT Camp’ at Burleigh Heads, so it seems likely Jim would have been doing some swimming. (AWM document number 8/2/25: 25 Infantry Battalion diary May – July 1944)  The group returned to Petrie on July 8.

The accident after the dance

The brigade diary mentions several times during the first week of July, how wet the weather was…. ‘much rain during the last few days’, ‘weather still inclement’, ‘rain again all day’.  Unfortunately I can find no mention of this incident in either the Battalion or Brigade diary – nor (via Trove) in the local press.  I assume military censorship was applied.  However I imagine the truck in question might have been similar to this one….

AWM  P00784.089  c.1944  Members of the Australian Women’s Army Service (AWAS) who are Drivers – Motor Transport stand to attention in front of a covered truck.

This site provides some insights into the experience of women during the war, with a particular force on Queensland : https://www.ww2places.qld.gov.au/homefront/women-in-the-war

This establishment at Yeronga was known as 2 Women’s Hospital (2WH). As a distinct medical unit 2WH had been situated at Redbank, in association with the 2/4 Australian General Hospital (AGH), but it moved completely to the purpose built complex at Yeronga by 1943. Only three specialist women’s hospitals were established in Australia during the Second World War, the others being 1 Women’s Hospital at Claremont in Western Australia and 3 Women’s Hospital located in the grounds of the base hospital at Concord 113 General Hospital, Sydney.[1] (https://en.wikipedia.org/wiki/Rhyndarra)

This entry was posted in escapades, relaxation, fun and games. Bookmark the permalink.