Serious drinking indulged in by all, despite a brewery strike 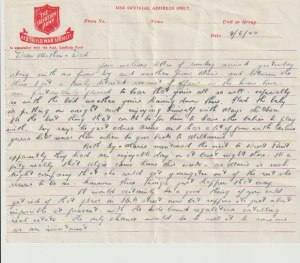 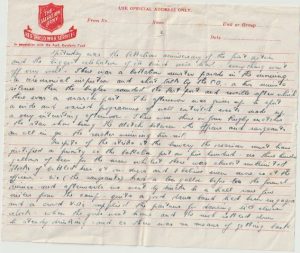 Your welcome letter of Sunday arrived yesterday along with one from Ivy and another from Marie – and between the three I got a fairly detailed account of affairs in the home town.  Am particularly pleased to hear that you’re all so well – especially so with the bad weather you’re having down there.  Glad the baby is putting on weight and enjoying himself with May’s children.  It’s the best thing that could be for him to have other babies to play with.  Ivy says he just adores Anne and has a lot of fun with Carline – guess he’ll miss them when he goes back to Melbourne.

Both Ivy & Marie mentioned the visit to Wrest Point.  Apparently they had an enjoyable day or at least night there.  It’s a pity really that Algie came home this week – as Marie is such light company that she could get Youngster out of the rut she seems to be in – however these things just happen that way.

It would certainly be a good thing if you could get rid of that place in Park Street now but suppose it’s just about impossible at present – with the hide bound regulation controlling real estate.  The only chance would be to sell it to someone as an investment.

Yesterday was the Battalion anniversary of the first action and the biggest celebration of its kind we’ve had.  Everything went off very well.  There was a battalion muster parade in the morning, a ceremonial inspection and short talk by the CO, a two minute silence then the bugler sounded the last post and reveille after which there was a march past.  The afternoon was given up to sport – a wide and varied programme of well contested events made up a very interesting afternoon.  There were three or four Rugby matches – the star show being the match between the officers and sergeants, an all in go – the snakes winning two-nil.

In spite of the strike at the brewery the occasion must have justified a priority as the battalion put on five hundred – no three hundred gallons of beer for the men whilst there was almost unlimited stocks of bottled beer at our mess and I believe even more so at the officers.  We (the sergeants) had a ten gallon before the formal dinner – and afterwards we went by trucks to a hall some few miles from the camp – quite a good dance band had been engaged and a crowd of VA’s supplied the partners for dancing till eleven o’clock when the girls went home and the mob settled down to steady drinking – and as there was no means of getting back till the show finished they certainly drank some beer returning to camp around four o’clock this morning and along with everyone else in the battalion from the CO down, bed is first favourite today.  But the whole show went off extra well.

The anniversary number of the Griffin is also particularly good this year.  I’m posting mine on but as it will come by surface mail will probably take some time to get home.

The capture of Rome and the apparently successful landing in France are big news and give cause for hope that the European show may end this year – though there’ll be a power of men killed before it does end.  If they can finish the show over there this year it shouldn’t take long to finish the Japs afterwards especially if Russia gives the allies bases for bombing.  The Yanks seem to be getting pretty sweet with Russia so I guess that’s their idea.

Must say cheerio now Mother & Dad.  Give my love to May & Ivy and the children and regards to the boys.

I assume Dad is referring to the regulations concerning rents and tenants’ rights, embodied in the National Security (Landlord and Tenant) regulations of 1941.  I understand they protected tenants from eviction and limited the rents that could be charged.    https://www.parliament.nsw.gov.au/researchpapers/Documents/protected-tenancies–history-and-proposals-for-r/Protected%20Tenants.pdf

The regular ‘Griffin’ was very low key – typed and ‘Gestetnered’ each Friday,  but on special occasions a big effort was made : a properly printed quarto-size journal, with heavy paper covers was issued to all Battalion members.

The usual format of the Griffin.

Below are the cover and first two pages of the special edition.  Note the comments made by the CO regarding the Liberator disaster on page 1, as well as the explanation for the use of the Griffin as Battalion totem.  The willingness of senior officers to sanction tongue-in-cheek reflections on their behaviour is evident in the ‘one act play’ on page 2. 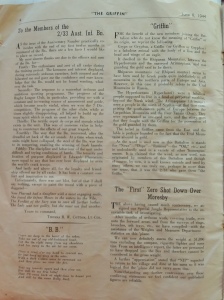 The War in Europe

June 6 – The D Day landings in Normandy, and the other elements of Operation Overlord certainly provided troops elsewhere with reason for optimism.

This entry was posted in Food and Drink, organisation, The course of the war. Bookmark the permalink.