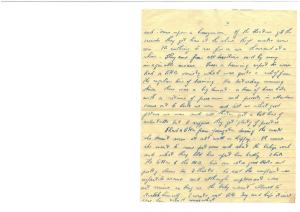 Just a few lines hoping to find you both happy and well and enjoying life in the island state.  I hope by now the weather is warming up and you’re able to get about more in the car – if you could get a run once a week it would break the monotony of things.

The Tassie mail must have missed out today – none of the chaps who usually get letters on Sunday got any today but as we don’t know what bastardry the army has cooked up for us during the week must take advantage of the lull on Sunday.

Life continues to be reasonably pleasant in these parts.  We’re still getting three meals a day and undisturbed sleep so I suppose we can’t complain.  We’ve had some good entertainment too – within a couple of miles of camp there’s been two good picture shows – new films that hadn’t been released to the public.  Last night’s program was extra good – “Beg, Borrow or Steal” and “Once Upon a Honeymoon”.  If the theatres got the crowds they get here at the shows they’d make some coin.  It’s nothing to see five or six thousand at a show.  They come from all directions and by every imaginable means.  From a training aspect too we’ve had a little variety which was quite a relief from the regular line of training.  On Saturday morning there was a big turnout – a team of brass hats with a retinue of press men and provosts in attendance came out to look us over and tell us what good fellows we were and all that – not a bad line of sales talk but I suppose they get plenty of practice.

I had a letter from Youngster during the week.  She doesn’t seem at all well or happy.  It seems she went to some put over (?) mob about the baby’s rash and what they told her upset her badly.  I took the letter to the MO – he’s an extra good bloke and pretty clever too I think.  He said the complaint was infantile excema and although unpleasant was not serious so long as the baby wasn’t allowed to scratch himself.  I wrote and told Ivy and hope it will ease her mind somewhat.

I suppose by now the election hysteria has died down and a state of war once again exists.  Labor certainly got a great win.  I’m still keen to hear how Dame Enid fares: the last I heard Reece was four hundred votes in front.  With all the new talent available Labor should be able to pick a much more solid Cabinet than they had.  There’s three or four them ought to go out.  If there is a re-shuffle Dr Gaha and McKenna might get a portfolio – that is of course assuming that McKenna got in in the Senate.  Curtin didn’t waste any time putting in the loan, did he?

Well, Mother & Dad I’m afraid there’s nothing else to write about.  One can’t even write about the weather because it never changes so I must say cheerio for the present.  Give my love to May, Anne & Carline (by the way Carline’s birthday is in October isn’t it?) and best regards to Laurie & the boys.

According the the War Diary, training this week involved two-and three-day exercises, whereas the previous week lists only ‘general training in camp area’.  However The Footsoldiers gives details of specific training in preparation for the airlift to the north coast which was being planned for early September:

Although few other than the CO and IO knew of the outline orders for the forthcoming operations, all knew it was to be an air-landing operation and all entered keenly into the busy training cycle instituted at Pom-Pom.  Every day would see platoons then the companies exercising ups nd down the foothills.  Every other day a company would move over to Jackson’s strip where, off the field, half a dozen DC3 fuselages were placed.  In these the troops would practise loading, disembarking and dispersing….Stores were to be distributed to each man so that every man would be carrying in addition to his own ammunition some of the reserve.  It was quite normal for a rifleman to be carrying his own 100 rounds as well as 100 more rounds (two additional bandoliers) and probably two extra grenades.  In the rifle platoons every man was also to carry two HE two-inch mortar bombs.  In addition every truck load of 20 men would have a case of 3-inch mortar bombs, either smoke or HE…. Three times in the weeks preceding the operation there were complete rehearsals of the assembly of the battalion, embussing, move to a marshalling area and then the move to the emplaning dromes.

These images (all from the series AWM 030140) featuring General Blamey are from a PR photo shoot (obvious from the fact that troops were not laden with ammunition etc as specified above).  Captions say they were taken on September 6 – the day before the eventual airlift.  War Memorial captions still indicate (incorrectly) that General Blamey “is farewelling men from Jackson’s Strip, as they are flown into the forward area.”  I wonder whether in fact they were staged on August 28 when Gen Blamey visited the 25th Brigade, and not on September 6 – when the weather was too poor for the airlift to be undertaken. 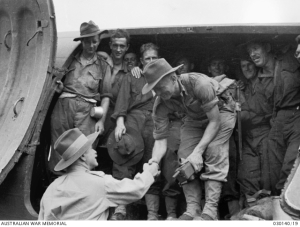 From the War Diary for August 28 – Gen Blamey addressed troops, congratulated brigade on past performances and expressed the greatest confidence in their future operations.

Dad may not have seen them before, but both films mentioned had been released in previous years – Beg, Borrow or Steal – a 1937 comedy – and Once Upon a Honeymoon- 1942 – Cary Grant, Ginger Rogers

Although the Chifley Labor Government was returned with an increased majority in both the House of Representatives and the Senate, Dame Enid Lyons did eventually win the seat of Darwin (now Braddon) for the United Australia Party (which later became the Liberal Party) ahead of Labor’s Eric Reece.  The seat was the last in the country to be declared, and Dame Enid made history as the first woman to be elected to the House of Representatives.  See this article from the Burnie Advertiser September 14 1943 http://trove.nla.gov.au/newspaper/article/68824276

This entry was posted in Australian, escapades, relaxation, fun and games, Hierarchy, Tasmanian and tagged General Blamey. Bookmark the permalink.