Money to be made by various means 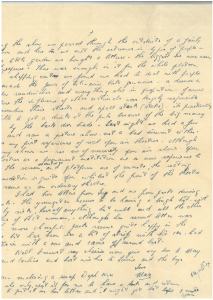 Just a few lines hoping to find you happy and well as I am at present.  I’m in the midst of what must  approximate very closely the Tower of Babel at the moment.  There’s a bit of a sports meeting on this afternoon and an officer and the RSM are trying to get entries for the various events and although the stakes are good – two bottles of beer for a win and one for second – the mob are rather apathetic to anything involving a big expenditure of energy.  They’ve had a tough week and spinal exercise or gambling for the highest possible stakes as a deterrent to the intense heat are more to their liking than running or jumping.  Mingling with the sales talk for competitors are the expressions peculiar to the two up ring.  There’s plenty of dough about and big bets are being laid.  Peter McCowan was in the money a few minutes back but Bull Haigh looks like taking it off him.  They got mine early in the piece.  There’s several poker and pontoon games on too.

Except for a battalion exercise that lasted all the week there’s not much to write about from this end.  The show lasted all the week and was remarkable for the variety in training and every other way.  Some of the finest scenery you’d wish to see and some of the barrenest – seemingly endless stretches of long white dusty roads and times of extreme cold at night whilst some days like today were like being back in the real tropics – hot and dry with scarcely even water to slake the thirst.

During the show we passed through the outskirts of a fairly big town and here too we met the extremes in types of people – from a little garden we bought a lettuce – the biggest I’ve ever seen – for threepence.  There was enough in it for the whole platoon.  In the shopping centre we found we had to deal with people who made the Jews of Tel Aviv look generous – a deener a time for sandwiches and everything else in proportion.  Of course I suppose the influence of other nationals was largely responsible.  They number their streets and spell steak – stake.  It’s practically impossible to get a drink at the pubs because of the big money made by the back door trade.  Last night we had a few jugs and saw a picture show – not a bad turnout either.  It was my first experience of real open air theatres – although any army shows we see are of necessity open air shows – open air theatres as a permanent institution are a new experience to me.  The screen mountings and platform are of concrete, the seating accommodation is quite open whilst the front of the theatre is the same as an ordinary theatre.

I had two letters from Ivy and one from Jack during the week.  The youngster seems to be having a tough trot with the baby sick, herself anything but well and all the other troubles of that woman, although her second letter was much more cheerful.  Jack seems quite happy in the service but has been in a bit of strife with his car – had a collision with a cow and came off second best.

Well I must say cheerio now.  Give my love to May, Anne and Carline and best wishes to Laurie and the boys.

PS Am enclosing a snap Daph Wise sent – she only sent it for me to have a look and return.  I forgot to put it in her letter and it might get lost before I write again.

A tough week, a bit of a sports meeting…. or not?? 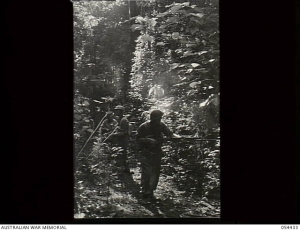 It is possible that Dad’s platoon was involved in exercises with another unit – e.g. the 2/2 Pioneer Battalion seen in this photo (AWM 054433) – but the 2/33 Bn war diary makes no mention of such an exercise.

Photo – from General Vasey’s War by David Horner.    There was a weekend of activities for the Seventh Division on July 17/18 , but there is no mention of it in the 2/33 Battalion diary (AWM RCDIG1027241) which focusses on the preparations for embarkation for New Guinea:

In The Footsoldiers, there is a description of the ‘great spectacle’ of the finals of the Divisional Rugby League competition, won by the 2/33rd team, but this was on the first weekend of July.

Although the men are from other units, the preoccupation with Two Up and card games is evident from these photos -‘ two up’ under palm trees (AWM 053422) , card games and ‘spinal exercise’ on board ship between Cairns and Port Moresby (AWM 055175).

A deener a time for sandwiches…the influence of other nationals

Reference to the American servicemen who always had plenty of cash and pushed up prices beyond what Australian men could afford.  However, a shilling for a sandwich may have actually been quite reasonable by comparison with Brisbane prices.  Here’s an extract from a story in the Brisbane Courier Mail from April 2015 which included recollections by Des McGee who was a boy during the war.  I’m sure Dad would have applauded the lad’s enterprise!:

“An American soldier gave Des 10 shillings to go down Racecourse Road to buy some sandwiches,’’ Howard said. “Des came back with the sandwiches which cost four shillings and the Yank told him to keep the change.   Des showed enterprise beyond his years and raced back to the shop¸ bought a loaf of bread and a Windsor sausage and made his own pile of sandwiches. He cleared three and a half quid that first day.’’ (http://www.couriermail.com.au/sport/opinion/love-of-the-game-when-racing-took-a-back-seat-to-war-effort/news-story/6bae5dc91c491e59152d2068858ba9b5)

This entry was posted in Americans, escapades, relaxation, fun and games, Food and Drink, organisation, Queensland and tagged Jack Chandler. Bookmark the permalink.

1 Response to Money to be made by various means