Think of safety only and never mind promotion 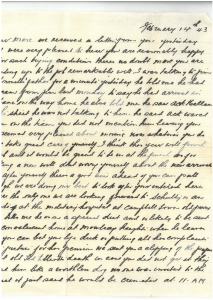 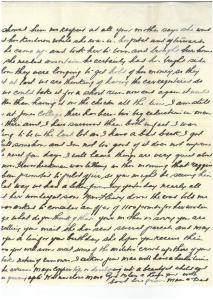 We received a letter from you yesterday and were very pleased to hear you are reasonably happy under such trying conditions.  There’s no doubt Max you are standing up to the job remarkably well.  I was talking to Jim McDonnell’s father for a minute yesterday.  He told me he had a telegram from Jim last Monday to say he had arrived in Brisbane on the way home.  He also told me he saw Ack Hallam in the street – he was not talking to him – he said Ack waved to him on the train.  You did not mention him leaving you.  You seemed very pleased about ….. now whatever you do Max take great care of yourself.  I think this year will finish the job and it would be grand to be in at the finish.  As for making a new will – don’t worry your self about the new arrivals.  Look after yourself – there’s a good time ahead if you can pull through.  We are doing our best to look after your interests here – you are the only one we are looking forward to.  Schultz is an inmate at the military hospital at Campbell Town.  Old Percy Jones tells me he is on a special diet and is likely to be sent to a convalescent home at Mowbray Heights.  When he leaves there you can bet your life Dick is putting all his complaints in the picture for his pension.  We sent you a clipping of the paper about old Ted Ellis’ death.  In case you did not get it.  They buried him like a worthless dog – no one was invited to the funeral just said he would be cremated at 11am.  They showed him no respect at all.  Your mother says she won’t forget his kindness while she was in hospital and afterwards when he came up and took her to town and brought her home.  When she needed assistance he certainly had his bright side.  Anyhow they were longing to get hold of his money so they have it at last.

We are thinking of having the car registered so that we could take it for a short run now and again.  It would be better than having it on the chocks all the time.  I am still down at Jones College.  There has been two big reductions in men down there and I have survived them both in fact I was wishing to be in the last lot as I have a bad back.  I got a chill somehow and I’m not too good.  If it does not improve in the next few days I will leave.  Things are very quiet about here now.  Trevor Hickman was telling us this morning that Reggie had been promoted to pilot officer so you might be seeing him up that way.  We had a letter from Ivy yesterday, nearly all about her wonderful son.  Mrs Fleury(?) down the road told me she was asked to consider an offer of 1100 pounds for her wooden cottage.  What do you think of that?  Your mother is sorry you are not getting your mail.  She has sent several parcels and May sent you a tin for your birthday.  She hopes you receive them.  I guess you will soon meet some of the Militia crowd up there.  If you can take notice of rumours I reckon Jim Mac will have a hectic time when he arrives.  May’s copper top is developing into a beautiful child and Anne is growing up too.  Will now close Max.  God bless & keep you with best love from Mum & Dad. 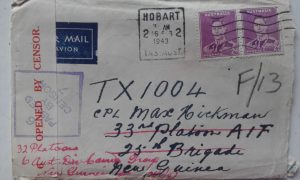 As with Ivy’s letter (see previous post) this envelope shows a change of address which would have contributed to its transit time.

Dad’s father was working at the H Jones & Co (IXL) cannery on the Hobart waterfront. 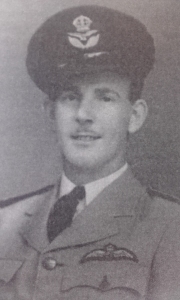 Reg Hickman 408195 rose to the rank of Flight Lieutenant and was with the 13 Aircraft Repair    at the time of his discharge in October 1945. 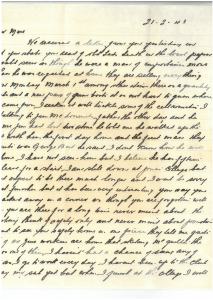 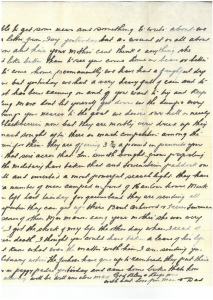 We received a letter from you yesterday in which you state you read of old Ted’s death in the local paper.  It would seem as though he were a man of importance, more so than he was regarded at home.  They are selling everything on Monday March 1st.  Among other items there is a quantity of nails and a pair of gumboots.  It is not hard to guess where they came from.  I reckon it will tickle some of the cell…(?)  I was talking to Jim McDonnell’s father the other day and he told me Jim had lost two stone.  He told me he walked up the street with him the first day home and the first man they ran into was George Best.  He said I don’t know how he will get home – I have not seen him but I believe he has fifteen days’ leave for a start.  I am still down at Jones’ College but I don’t expect to be there much longer and I won’t be sorry when it finishes but it has been very interesting.  You say you are parked away in a corner as though you are forgotten.  Well I hope you are there for a long time.  Never mind about the monotony – think of safety only and never mind about promotion.  I want to see you safely home in one piece.  They tell me quite a lot of ex Zinc workers are home.  That …..McQuiltan the Pom is one of them.  I haven’t had a chance of seeing any of them as I go to work every day.  I haven’t been up to the club to pay my sub yet but when I finish at the College I will be able to get some new and something to write about.  We had a letter from Ivy yesterday but as usual it is all about her son and heir.  Your mother can’t think of anything she would like better than to see you come home on leave or better still to come home permanently.  We have had a frightful dry season but yesterday we had a very heavy fall of rain and today it has been raining on and off.   You want to try and keep smiling Max – don’t let yourself get down in the dumps & every day brings you nearer to the goal we desire.  Our hill is nearly all blackberries now but they are mostly very dried up.  They are much sought after – there is much competition among the factories for them – they are offering 3 3/4 a pound in punnets.  You know that six acres that Len Smith bought from Propsting – well, the military have taken that and Lowenstein’s paddock on the hill and inserted a most powerful searchlight.  They have quite a number of men camped in front of Hanlons house.  Mick Mason left last Tuesday for Queensland.  They are sending all the carpenters they can get up there.  Basil Ashwood & Trevor Lawrence and scores of others.  Mrs Mason rang your mother.  She was very upset.   I got the shock of my life the other day when I read of Crozier’s death.  I though you could have taken a lease on his life.  I don’t know what was the matter with him.  I am sending you the obituary notice.  The Fishers have gone up to Rainbirds.  They put their socks (?) on Peggy Pedro yesterday and came home broke.  That’s how they always will be.  Will now close Max.  God Bless & keep you.

With best love from Mum & Dad.

Tasmanian Archive records show that he died intestate, so the Public Trustee would have been responsible for selling his possessions and distributing the proceeds as he (the Trustee) saw fit.

Lowenstein’s paddock on the hill.

This was further up Pottery Road – from which walking tracks lead up onto Mount Wellington. 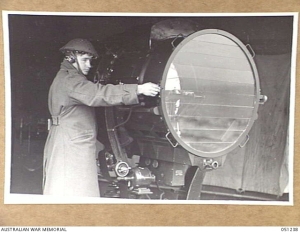 AWM 051238 – soldier operating searchlight on Hobart’s eastern shore (Fort Direction).  Presumably the searchlight referred to in this letter was similar to the one in the photo. 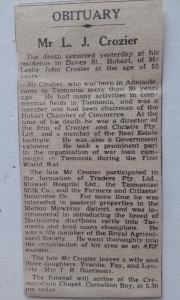 This cutting from the Hobart Mercury was included with this letter. 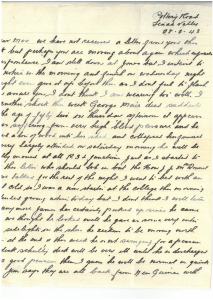 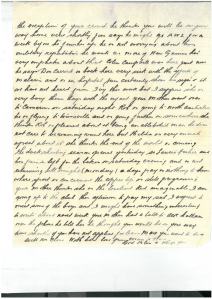 We have not received a letter from you this week but perhaps you are moving about again which upsets correspondence.  I am still down at Jones’ but I intend to give notice in the morning and finish on Wednesday night.  I might even give it up before then as I don’t feel too flash.  I can assure you I don’t think I am wearing too well.  I got another shock this week.  George Muir died suddenly at the age of fifty two on Thursday afternoon.  It appears he was suffering from very high blood pressure and he carried a box of wood into his shed and collapsed.  His funeral was very largely attended on Saturday morning.  He will be greatly missed at all RSL functions.  Just as I started to write this letter who should lob in but the Hon J J McDonnell and we talked for the rest of the night.  I went to bed with an awful cold so I was a non starter at the College this morning.  I intended giving notice today but I don’t think I will turn up any more.  James has certainly picked up since he came home.  We thought he looked well.  He gave us some very interesting sidelights on the show.  He reckons to be moving north again at the end of this week.  He is not swinging for a pension like Dick Schultz.  Dick will be very ill until he is discharged with a good pension then I guess he will be normal in quick time.  Jim says they are all back from New Guinea with the exception of your crowd.  He thinks you will be on your way home very shortly.  Jim says he might go AWL for a week before he finishes up.  He is not worrying about his military reputation.  He wants no more of New Guinea.  He’s very emphatic about that.  Colin Campbell was here just now.  He says Don Carrick is back here very sick with the effects of Malaria and is in hospital.  Jim certainly shows no sign of it.  We have not heard from Ivy this week but I suppose she is very busy these days with the infant.  Your mother went over to Camerons on Saturday night.  Rob is going to north Australia.  He is flying to Townsville and is going further on somewhere else.  She thinks Rob is pleased about it being an able-bodied man he does not care to be roaming round here but Hilda is very much upset about it.  She thinks the end of the world is coming.

The duck shooting season opened yesterday so Laurie Fisher and his friends left for the lakes on Saturday evening and is not returning till tonight (Monday).  A day’s pay is nothing to him where sport is concerned.  The copper top is still progressing – your mother thinks she is the loveliest kid imaginable.  I am going up to the club this afternoon to pay my sub.  I expect to meet some of the boys and I might have something interesting to write about next week.  Your mother had a talk to Ack Hallam over the phone.  He told her he thought you would be on your way home shortly.  If you have not applied for leave Max, you want to do so.

Will now close.  With best love from Mum & Dad. 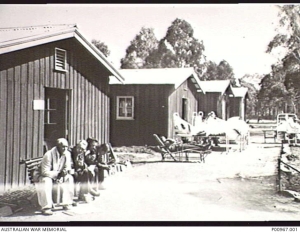