The last place on God’s earth to send women 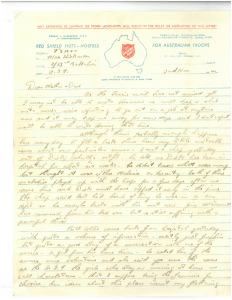 As the Tassie mail has not arrived yet I may not be able to write tomorrow so will drop a short note now.  We’re expecting to go out on a job at any time now and it may keep us away for some days and I don’t expect we’ll be able to write anything during that time.

Although there’s probably enough happens here every day to fill a book there’s been very little writeable news about our particular corner.  I met a chap yesterday out of Dick Schultz’s outfit. He told me Dick has been in hospital for about six weeks.  He didn’t know what was wrong but thought it was either malaria or dysentery – both of these maladies played up with the troops for a few days after we came here and Dick must have copped it early in the piece.  The chap said last he’d heard of Tiny he was in a con depot so he may be back with his unit now.  Jim McDonnell has recovered from his bad ear but is still suffering with a powerful thirst.

Bill Collis came back from hospital yesterday with quite a volume of information – mostly just furphies but quite a good story of a conversation with one of the nurses – a girl from his home town – he asked her if the nurses were volunteers and she said yes we’re the same as the AIF.  The girls who stay on nursing at home we call chocolateens – that I suppose being the feminine of choco’es – her ideas about this place weren’t very flattering and she much preferred the Middle East where their hospitals were either in or near the cities and there was a fair bit of life and amusement and quite apart from that I reckon this is the last place on God’s earth to send women.  As far as we’re concerned it doesn’t make much difference except that the fighting is much different.

I had a letter from Youngster yesterday.  She seems quite bright and cheerful although she says she’ll be confined to her home from now on.  The office work she’s doing at home and her gardening seem to keep her mind off herself.  It will be a good ting when her ordeal is over.

I sent a small parcel home this morning.  Just my puggaree and a match box cover one of the chaps made out of a piece of zero.  They’ve produced a lot of souvenirs out of this stuff – from a small pipe the chap made some tiny serviette rings whilst another of the mechanics has turned out some rather neat rings.  The puggaree is about the last vestige of AIF equipment so as I’ll only lose it up here am sending it on.

We’re travelling light these days and even snaps can take up room.  There’s a couple I found when I cleaned the pack out.  One was taken at Port Said the other was when Peter McCowan was on leave in Palestine.  Peter’s the chap with the hat on and his elbow on the table.  The snap is upsetting the morale of the troops so I thought I’d better get rid of it.

I must say cheerio now Mother & Dad.  Give my love to May, Anne and Carline and best regards to Laurie and the boys.

The puggaree is the hatband which includes the battalion colour patch – it is clear Dad was expecting to be sent to the front line.

The last place on God’s earth to send women

On 23 August the 2/9 AGH (which was the only General Hospital in New Guinea at the time) arrived (at ‘The Seventeen Mile’) as a 600-bed hospital and on 25 September they had 560 patients (mainly with fevers and dysentery) …Two days later the hospital was expanded to 800 beds, including a fly-proof ward for dysentery patients.  ….On 6 October 800 beds were equipped and 732 occupied, and a week later the establishment was increased to 1200 beds….The sisters arrived on 29 October…taking over the wards from the orderlies who had, with very little training or experience, conscientiously carried out their work with quite a degree of skill….The ward staff work broken shifts, but if necessary worked all day and into the night, and in the first months there were no days off.  Most wards of sixty beds and over had three or four sisters on day shift and one on night duty….Shortly after the arrival of the sisters, the wet season with its daily deluges of heavy rain, arrived….The daily deluges soon made the drainage throughout the hospital ineffective against the floods of water which ran off the surrounding hills, and the black volcanic soil quickly became bogs of heavy, sticky, thick mud.  Many of the tents, both in the staff lines and wards, were mouldy and leaked.  beds had to be moved in limited space to avoid drips, and they sank in the mud at all angles.  It was difficult to keep patients dry, and there was nowhere to hang wet blankets out to dry.  The situation became critical as increased numbers of sick and very fatigued men from the Kokoda Trail and later the Buna campaign, were admitted.  The increased number of troops in the area, and the conditions in which they were fighting, only worsened the situation…..Owing to the lack of open ground, and the floods of water and mud, the hospital faced a critical situation….

Souvenirs from pieces of Zero

I can remember seeing the matchbox cover Dad mentions.  The AWM collection doesn’t include any serviette rings, but it does include this memento (REL49028) which is inscribed on the reverse side with the words ‘Zero Metal’.