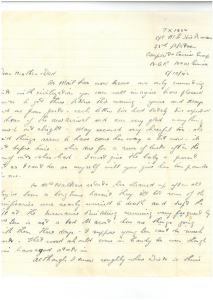 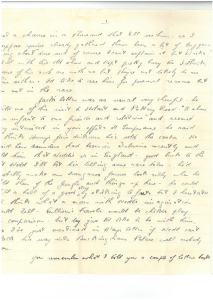 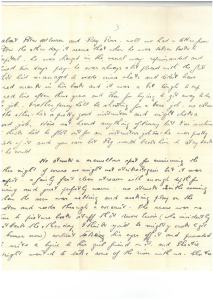 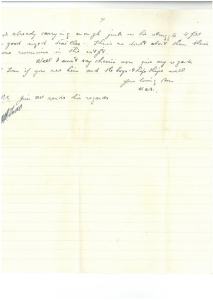 As Mail has now become our only connecting link with civilisation you can well imagine how pleased I was to get three letters this evening – yours and May’s and one from Jack.  Each letter I’ve had lately I’ve expected to hear of the new arrival and am very glad everything turned out alright.  May seemed very cheerful too.  It’s not before time – she’s due for a run of luck after the run of outs she’s had.  I must give the baby a present but as I can’t do so myself will you give her ten pounds for me.

So Mrs Walker’s estate has cleaned up after all. They’ve been a long time haven’t they.  I’ll bet some of the beneficiaries were nearly worried to death and kept the lift at the Insurance building running very frequently.  Mrs Len is not a bad old scout.  How are things going with them these days?  I suppose young Len can’t do much work.  That wood should come in handy too even though you have a good stock in.

Although I know roughly where Dick is there’s not a chance in a thousand I’ll see him.  As I suppose you’ve already gathered there’s been a lot of buggarising about done, and of course I can’t explain it but Dick’s still with his old show and kept pretty busy too I think.  Some of his mob are with us but they’re not likely to see him either.  I’d like to see him for personal reasons but am not in the race.  Jack’s letter was as usual very cheerful.  He told me of his visit to Hobart and Pottery Road ‘to show our infant to our friends and relations’ and seemed very interested in your efforts at temperance.  He said ‘I think Henry’s fair dinkum – he’s sold the casks’.  He said Len Saunders had been in Deloraine recently and told him that Weddie is in England.  Good luck to the old Wedd I’ll bet he’s telling some rare tales.  He’d probably make our kangaroo forces look silly when he told them of the jungle and things up here – he could tell a hell of a good story by sticking to facts but I hesitate to think what a man with Wedd’s imagination could tell – Gulliver’s travels would be child’s play in comparison.  But by jove I’d like to be with him.  As I’ve just mentioned in May’s letter, if Wedd can’t talk his way into Buckingham Palace, well nobody can.

You remember what I told you a couple of letters back about Peter McCowan and Ray Ross.  Well we had a letter from Peter the other day.  It seems that when he was taken back to hospital he was charged in the usual way, reprimanded and fined two days’ pay.  He was always a bit pleased with the fact that he’d managed to evade crime sheets and didn’t have a red mark in his book and it was a bit tough to cop a red line after three years and then for trying to get away to do the job.  I rather fancy he’ll be shooting for a base job – one extreme to the other – he’s a pretty good instructor and might click a good job.  We’ve not heard anything of Rossy but I’m inclined to think he’d be flat out for an instructors job too – he was pretty sick of it and you can bet Peg would back him to stay back if he could.

We struck a marvellous spot for swimming the other night.  Of course we might not strike it again but it was perfect – a fairly fast clear stream with enough depth for diving and just perfectly warm.  We struck it in the evening when the sun was setting and making play on the water and reeds through a coconut.  The scene was so true to picture book that Snow Lewis (who incidentally got back the other day – I think you’d be mighty crook to get a homer now) couldn’t take his eyes off it and proceeded to write a lyric to his girl friend on it, and Shortie Wright wanted to take some the river with us.  Shortie is already carrying enough junk his struggle to fill a good sized trailer.  There’s no doubt about them, there’s some rum ‘ens in this outfit.

Well I must say cheerio now – give my regards to Tom if you see him and the boys – I hope they’re well.

Dick’s old show was the RAP for the 2/31 Bn so at the time of this letter, he would have been ‘up on the track’…. This photo shows the RAP of an unidentified Battalion at Owers’ Corner – 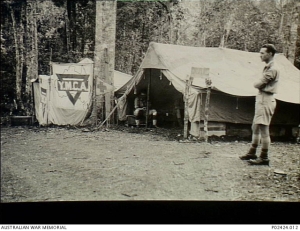 AWM P02424.012 September 1942.  NX70195 Captain Alan Victor Day (right), a Medical Officer (MO), stands in front of the Regimental Aid Post (RAP) that he runs. Two soldiers (centre) who may be receiving first aid treatment are sitting inside the RAP tent. A rough sign mounted on two poles (centre, right) identifies the tent as the RAP, while its medical function is more generally indicated by a small Red Cross flag or pennant attached to a pole standing outside it in front of the large tree (centre, left). A rolled-up stretcher leans against the trunk of the tree behind the pennant. A large YMCA sign emblazoned on an outline map of Australia (left) distinguishes the tent used by the philanthropic organisation’s representative. Owers’ Corner marks the limit of the motor road from Port Moresby on the southern section of the Kokoda Trail.

Some of his mob are with us: Carriers from the 2/31 were also part of the Composite Carrier Group and later the 25th Brigade Carrier Group.

Pete McCowan : in two places at once!?

Pete McCowan was in hospital in Brisbane when Dad and the carrier platoon embarked September 6.  Somehow, between writing the letter mentioned here and that letter being received by Dad, McCowan seems to have travelled to Papua and joined the Battalion at Ioribaiwa: see this photo taken there on October 1. 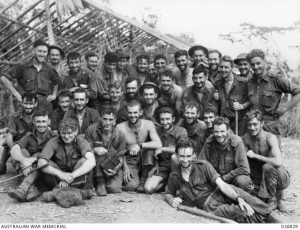 AWM026829 : Tired but happy Australian soldiers of the 2/33rd Battalion at Ioribaiwa Ridge.  October 1, 1942…(many others identified)….Peter McCowan (front)

Dad’s friend Rex Wedd (408200) had joined the Air Force and trained in Canada.  All his missions were subsequently flown out of England.

A marvellous swimming spot – with enough depth for diving 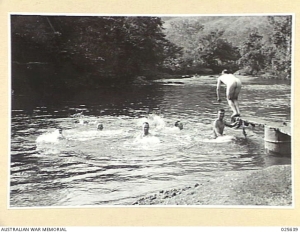