I’d like a drink myself but won’t be in this queue racket: back in ‘doover’ bivouac, awaiting movement orders 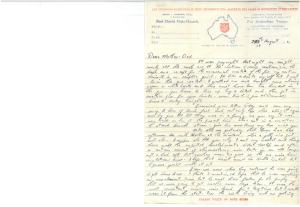 It was pay night last night so tonight nearly all the mob are at the canteen (camp canteen) on the hops and except for the occasional crackle of the fire my section domicile is in complete quiet.  I’d like a drink myself but I won’t be in this queue racket.  I walked over and bought some shaving cream a while back and there must have been two hundred in the queue – you have to line up to buy a ticket and then get in another queue for your drink.  Even Irish (Jim McDonnell) turned away tonight.

I received your letter today and am very sorry to hear of Anne’s fall and certainly hope she’s alright again now.  By jove I’ll bet May was in a frenzy.  As you say it was very hard on her at the present time – she’s not in a condition to stand too much strain.  Give her and Anne my love will you.

Ack told me yesterday that Gwen had had afternoon tea with Mother at the Windsor.  She’s a jolly nice girl isn’t she?  I suppose she told you why I sent my wallet and things home.  Well, the expected developments didn’t develop and after a certain amount of shimanacking we’re back in an old camp – not a bad spot but nowhere near as good as the one we’ve been in, between times.  I hope that doesn’t sound too double Dutch but I guess you’ll work it out.

I can see now where Tiny reckoned he was going to get home leave.  I think I mentioned before that he was sweating on convalescent leave but he must have fallen for the furphy that we were going to get another seven days leave.  It was the most consistent rumour we’ve heard for a long time but I wouldn’t wear it from the start.  I see the sixth Divvy mob are getting fourteen days and travelling time but I’ll bet there’s very few of them had as much overseas service as we have had.  I guess it was the dissatisfaction about our lot that got them the extra time.  Still good luck to them.  We’re probably living better than at any time in our army lives but I’m terribly sick of it and can’t stir up much enthusiasm.

I can well appreciate your remarks on the cost of living and the relative value of money.  The men who are in the swim today, collecting the dough on today’s values – will be all right when it’s over but the values are certainly changing.  Building of private homes seems to have stopped everywhere now.  By jove there’ll be a building boom when it’s over.  You know that bush property behind May’s place – it used to belong to Ashton Jones – what about seeing what they’ll take for it.  It’s estate property I think and might be bought pretty right and building is definitely going  that way – at a price it would be good holding.

There’s no doubt about Jim McDonnell – he’s got some tin that bloke.  I told you about his escapade a couple of weeks back.  Well for certain reasons he hasn’t been charged till today and when they told him he had to front the OC this morning everyone expected he’d go for a row of sixes.  I don’t know what the charge was but he got off with a fine of a day’s pay – we all thought he’d cop a spell on the inside or at least a fiver but he got away with it again on his good record.  But if the Irish B had been crimed for his misdemeanours his paybook would have been well decorated.

One of our blokes has had a funny experience – when we were in England he fell on his wrist.  The RAP treated him for a sprain and to all intents and purposes his wrist got right.  Lately it started to swell and eventually achieved very noticeable proportions and he wasn’t able to use his fingers so he went to the MO who sent him on to an ambulance crowd where he was examined by quite a number of doctors.  I forget what they called it but the crux of the story was that he’d cracked the bone and the marrow had leaked out – took two years for enough to get out to upset the blood system and cause the swelling.

You know how our fellows winge.  I suppose they winged in your day too – well the best effort I’ve very heard was early this week.  Since we left the last camp and lost our platoon cook, tucker had been a bit light on.  Well on Tuesday night the QM put on a hell of a feed – cold meat, lettuce and beetroot with tinned fruit to follow.  When everyone had eaten their fill and there was still quite a lot left, some of them started winge-ing (quite seriously too) because they weren’t hungry enough to eat all the grub.  Well that’s an all time champion.

I must say cheerio now and climb into the blankets.  We’ve got a bit of a stunt on tomorrow and reveille is at half past four.  My best regards to the boys.

Afternoon tea at ‘The Windsor’

I suspect this was in fact at the Hallam residence in Windsor St Glenorchy.

From The Footsoldiers:  ….”the landing of the Japanese at Buna on the north coast of New Guinea on 22 July had necessitated the placing of the Brigade on instant alert and warning for a move.  We knew the 18th and 21st Brigades were embarking and were on the move.  For ten days we sat about Petrie.  All of our tents had now gone, our gear was all packed, ammunition issued and we were living in our groundsheet ‘doovers’.  Our kit bags had gone to the Kit Store – and we waited and waited.  On 12 August we were stood down from alert, and orders were issued for the battalion to move to Toorbul Point on the coast to carry out amphibious training……From 19 to 26 August the battalion exercised in the boats both by day and night.  All enjoyed this sea interlude as something different from the hard three months of training we had jut had.  By 1600 hours on the 27th we were back in ‘doover’ bivouac at the old Caboolture site, and on 24 hours notice to move……” 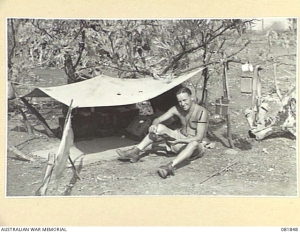 ‘Doover’ was a term that generally referred to a makeshift shelter, but those referred to in this extract were constructed from groundsheets, as in this photo.  (AWM 081848)

Photos: amphibious training (a different battalion, a year later – but on the Queensland coast – no doubt there were similarities)  AWM 054698 and 054707

A bit of a stunt on tomorrow 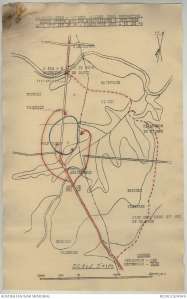 The approaching ‘stunt’ was a major tactical exercise/ demonstration that had been in the planning for 3 weeks. The objective was “to demonstrate a method of dealing with minor opposition on the axis of advance by infiltration, envelopment and by passing.” (ref 25 Bde diary August 1942 – AWM RCDIG1024949  p73).  A sketch map appears on p 76 of the same diary, and on pp 93-94, a report by Lt-Col J R Wolfenden.  Point 4 of the report indicates that over 300 officers viewed the demonstration:  “Comds and staffs and unit representatives of the following formations attending- 1 Aust Motor Bde    3 Aust Div    Units attd to 25 Aust Inf Bde     32 U. S. Div       41 U. S. Div   Representatives of LHQ, First Aust Army   and 2 Aust Corps “

The other Battalions of the 25th Brigade participated in another demonstration the same afternoon.  The Brigadier was sufficiently impressed with the performance of all involved that he sent a congratulatory message:  (image)  “ Senior officers present were very pleased with work of the troops and spirit in which demos carried out.  Brig 25 Bde wishes to congratulate all ups taking part.” (ref 33 Bn diary August 1942  AWM RCDIG 1027237  p78)