Chaps have to get married to get a spot of leave; stunts on iron rations 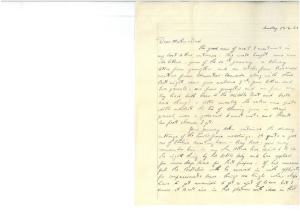 The good run of mail I mentioned in my last letter continues.  This week brought some more old letters – yours of the 26th January, a February letter from Youngster and an October from Rex Wedd written from Edmonton, Canada.  Along with these last night came your welcome 9th June letter and two parcels – one from Youngster and one from May.  They had both been to the Middle East and back, and though a little mouldy the cakes were quite edible whilst the tin of chewing gum in May’s parcel was a godsend.  I must write and thank her first chance I get.

Your January letter contained the Mercury cuttings of the Lindisfarne weddings.  It’s quite a good one of Thelma Sweetingham.  Ray Ross – you may remember him in my other letters – has decided to do the right thing by his little lady and has applied for seven days’ leave for that purpose.  If he’s successful the Battalion will be snowed in with applications for compassionate leave.  Things are tough when chaps have to get married to get a spot of leave, but I know at least six in this platoon with ideas in that direction.  It depends on the success of the last (best?) case.

Wedd seems to be enjoying life in Canada.  His letter was as usual very blaze but there’s no doubt he likes the life even though it restricts his social life.  Reggie [Hickman – an Air Force sergeant – see letter from home March 8] certainly must be on a good racket – he always seems to be home on leave but I think the air force get a much better go than we do.  There was a bloke went up to Launceston in the train with me who had sixty days’ leave.  The AIF cuts no ice with political parties there days – we’ve very few friends.

You mention in your last letter that Mother has got some razor blades and things for me – well, I’d like her to keep them for a while.  I was able to trade some tobacco for a couple of packets so should be right for three months or so.  As a matter of fact I’ve just finished the last of the blades I bought at Glasgow, and May’s tin of chewing gum should last a fair while too.  I think Mother and Anne should eat the chocolates because I rarely do these days.

I’m not surprised at McQuiltan trying to get out although it’s been a good bludge as far as he was concerned but he’ll want a better reason than that these days: when Tiny can’t toss them it’s a cert McQuiltan can’t.

By Jove there’s no doubt Jenkins has a charmed life – a cat isn’t in the race with him.  He must have got his discharge as the paper mentions him as Mr Jenkins.  I haven’t seen McDonnell today but he’ll be tickled about the court business.

Well I guess I must close now.  Time is awful short.  This new CO certainly keeps us at it.  There’ll be a hell of a lot of men crack up as soon as this business is over.  My best regards to May, Anne & the boys.

Minister for Air, J.V. Fairbairn and Assistant Chief of the Air Staff, Wing Commander George Jones attended a meeting in Ottawa, Canada in 1939 to finalise the arrangements for the Empire Air Training Scheme. Fifty flying schools were established. Each of the Dominions would carry out their own Elementary Flying Training and the advanced Service Training would be mostly conducted in Canada due to its proximity to British aircraft factories and the war in Europe. The Dominions would generally have first choice of their graduates but the great majority were expected to fight in Europe for the Royal Air Force.  Australia signed two agreements on 17 December 1939, one with the UK regarding carrying out training in Australia and the second was between, Australia, Canada, New Zealand and the UK regarding training in Canada. The two agreements were set to expire on 31 March 1943, but were both renegotiated and extended. (http://www.ozatwar.com/raaf/eats.htm)

Preliminary training at Cambridge airfield, outside Hobart.  The Air Force tested trainees for pre-selection before they were shipped to the mainland for further training, and later on to Canada.

The new CO was A W Buttrose who was only 29 years old.  He had been with the Battalion since mid-1940, and was a Major by the time they reached the Middle East.  According to the Australian Dictionary of Biography-   because of his comparative youth, his troops referred to him as ‘Alfie the Boy Wonder’ and—when his disciplinary measures were not appreciated—as ‘The Boy Bastard’. He would win their confidence in battle. 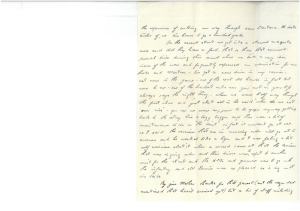 I received your welcome letter of the 15th when we got in tonight after another four day stunt.  Since writing you last Sunday we’ve had one full day in camp.  We started one stunt last Monday morning and finished Wednesday night then started another on Friday and finished at seven o’clock tonight.  The first of the shows was easy to follow – it was mostly a matter of cross country marching and hill climbing but the second one was a bit over my head.  They never had anything like it at New Norfolk and the weather was on the farmers side too.  We saw a fair bit of country on the first show and quite a lot of Queensland vegetation, and for the first time in my life a koala bear in a tree.  We passed through a number of banana plantations but of course the bananas were all green and a number of pineapple beds and citrus fruit orchards but in each case the cupboard was bare and believe me we could have used some fruit as we only carried iron rations – three tins of bully beef and two packets of dog biscuits per man.  At one stage of the game we took shelter in a cow shed and there were two kerosene tins of milk so the boys got stuck into them.  When the cocky’s wife came in her eyes nearly popped out and she said “you’re drinking the pigs’ milk”.  Hard times for the pigs, wasn’t it?  We also had the experience of cutting our way through some lantana.  It took twelve of us two hours to go a hundred yards

On the second stunt we got into a starved mosquito area and did they have a feed.  That is those that survived.  Several times during this second show we took a very dim view of the war and frequently expressed our admiration for our Lords and Masters.  I’ve got a new driver in my carrier – not new to the game – one of the real old hands in fact, but new to me – one of the hardest nuts ever you met in your life – always says the right thing.  When we were half way through the first show and just about all in he said “When do we eat our rice?” – you see we were supposed to be Japs – Anyway getting back to the story he’s a lazy bugger and there was a bit of maintenance to do on ‘The Saint’, in fact it wouldn’t go at all, so I said the carriers that are in running order will go out tomorrow and he worked like a tiger and I was feeling a bit self conscious about it when a second screed came out that the carriers that were in going order and their drivers were to report to another unit for the stunt and the NCO’s and gunners were to go with the infantry and old Lennie was as pleased as a dog with two tails.

By Jove Mother thanks for that parcel (not the razor Dad mentioned – that hasn’t arrived yet) but a tin of stuff including scallops, fruit and toothpaste and brush – believe it will be good when we get time to do it over.  I also got a very nice cake from Youngster and we’ve just done that over.  It was lovely.

Things certainly don’t look too good in the desert do they?  That Rommel certainly must be a brilliant General.  Only a week or so ago the papers reckoned he was in a trap and now he’s got Tobruk.  We’re certainly up against it.

I thought you might have mentioned in this letter how Bertie and Co got on.  I told Jim Mc and he said he hoped the B’s get twelve months.

If you happen to see Mick or his wife again tell them I’ll write as soon as I can but at present I’ve only got time to write to you and Youngster.

Must say Cheerio now.  The bug trap looks very inviting so all the best to May, Anne & the boys.

That Rommel must be a brilliant General

The Daily News (Perth) 22nd June …TOBRUK FALLS…Field Marshall Erich Rommel’s hard hitting Africa Korps has regained for the Axis the vital Libyan fortress and supply base of Tobruk which has been in British hands since January 22 1941….