May 1942 : four letters from holding camp in Casino NSW

I had hoped there would be a letter for me today but as the mail has been handed out I must have missed out.  Still it’ll probably come tomorrow.  That phone call Saturday evening was the best bit of service I’ve seen from the PMG.  I had leave from half past four and got into town about twenty past five.  Enquiry at the post office said there was a delay of one hour on the line.  That usually means at least four hours so I booked the call for half past six.  The Post Office closes at six and you have to wait outside where the phone boxes are for the call.  Never dreaming that it was my call, I answered when the phone rang.  It was dead on time, right to the minute.  By Jove I’m sorry to year young Peter got bowled.  I certainly hope he’s alright.

As soon as I left the phone I did a round of the boarding houses and although they’re all taxed to capacity at present – owing to a lot of officers’ wives and even some of the chaps’ wives – still, they expect a slackening off soon so that part of the business should be alright.  But it’s a lousy town although I believe Lismore which is only about twenty miles away is a great place.  Jim McDonnell talked his way into a day’s leave yesterday and according to him it’s a second Durban so that might be alright.

I had a talk to the adjutant yesterday and I didn’t quite like his non-committal attitude.  After I’d told him what I wanted he showed me the training syllabus which comes into effect as soon as the leave is finished.  There are six hundred due back this week.  It’s certainly a big programme.  I think his intention was to tell me there wouldn’t be much leave about, but I think I’d get a bit just the same.  Anyway Mother it’s a fifty fifty bet, and Ack Hallam is getting his wife over so if it’s alright for her to take the chance it should be alright for you too.  Although of course they take a different view of wives and it’s a cow of a trip but I would like you to come if it’s possible.  Anyway Mother I’ll wire you as soon as I can get anything definite.

I went to the pictures Saturday night.  It was a real good programme too.  Pimpernel Smith and Nobody’s Sweetheart – one of the best I’ve seen for a long time.  If it comes to Hobart don’t miss it.

Jim McDonnell has got a job in the Q store – only temporary at present but you never know where those jobs will lead to.  There are not many chaps in camp at present and duties are plentiful – guards particularly.  I’ve struck a couple of particularly unpleasant jobs – stand over jobs and I don’t like ‘em one little bit.

I don’t know whether I mentioned it when I rang but I got quite a bundle of old mail that had been to Palestine and back.  There were three of yours and four of Youngster’s and one each from May and Jack.  They were quite interesting too, particularly in retrospect.

Must say cheerio now.  All the best to May, Anne, Laurie and the boys

PS If you see Rob tell him I got a dozen ABC’s in a bunch.

A dozen ABC’s in a bunch

No idea what this means…does anyone?

Logo: For Faith and Freedom   CENEF

At last I’ve been able to make tentative arrangements for accommodation in Casino.  Any time after the end of next week, providing I let them know in good time.  It’s at a good hotel – there’s absolutely no hope in the boarding houses.

Ack Hallam and Bob Cole were lucky enough to arrange private accommodate for their wives.  I fancy Ack arranged it through someone in the Masonic Lodge and they expect the to come over on Friday week (22nd).  Ack said to ask you to ring Gwen (Glenorchy 56) and if she still intends coming you could travel together.  I’ve been on piquet duty in town all day – a cow of a job – and rang Youngster to suggest that she might come up with you because although I think I’ll manage to get some leave there would be a lot of time when I couldn’t be with you and it would be very lonesome.  But Youngster doubted that she would be well enough but is going to talk it over with Bill and write you.  I knew it was no good suggesting May coming because although it didn’t worry us a forty eight hours train journey is a rotten trip to anyone not used to travelling, especially in May’s condition.  If Ivy could manage it you might be able to spend a few days in Brisbane.  It’s only ninety miles from here and to all intents and purposes is a nice place.  The weather here is marvellous just now.  I must get back on the job now so will say cheerio – hoping to hear from you very soon. 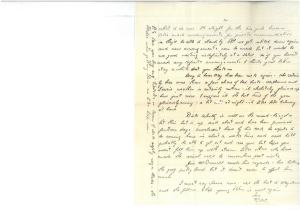 I received your welcome letter of the fourth today – by Jove it’s slow, isn’t it?  It didn’t take much longer to go to the Middle East – looks as though we’ll have to stick to air mail even here.  Ack’s been getting his letters in four days.

You didn’t mention when I rang that you were both thinking of coming over.  I hope you can manage it – it would be great.  With things as they are there’s no knowing how much leave I’d be able to get and it would be damned lonely for Mother if she came alone – that’s why I rang Ivy, but I had an airmail letter from her yesterday and her doctor advised her not to make the trip.  It certainly is a rotten trip for anyone not used to travelling, so if you two can come together you could break the journey at Sydney for a few days.

Ack’s wife and Bob Cole’s wife were coming over next weekend so I got a chap to send a wire yesterday morning.  Then in the afternoon we had a muster parade and were told we’d be moving again very shortly.  The Trump left this morning – according to the information handed out yesterday it’s not a big move – about a hundred miles north of Brisbane – so I don’t know what to do now.  It’s alright for the two girls because Ack’s made arrangements for private accommodation so they’d be able to stand by till we get settled down again and new arrangements can be made but it would be no good waiting indefinitely at a hotel.  So if you haven’t made any definite arrangements I think you’d better stay a while – don’t you think so?

Sorry to hear May has been sick again.  She certainly has more than a fair share of bad luck.  Melbourne and Tassie weather is certainly rotten – it’s absolutely glorious up here just now.  I suppose it’s the best time of the year: gloriously sunny , a bit cold at night – it’s like late February at home.

Dick Schultz is well on the mend.  He’s got a bit thin but is up and about and has been promised fourteen days’ convalescent leave by his MO.  He expects to be coming home in about a week’s time and said he’ll probably be able to get out and wee you but hopes you won’t fill him up with steam.  Like others who have made the social call, he remembers past visits.

Jim McDonnell sends his regards – he’s hitting the grog pretty hard but it doesn’t seem to affect him much.

I must say cheerio now.  All the best to May & Anne and the fellows.  I hope young Peter is well again.

PS  Can you buy any Gillette or Seven O’clock safety razor blades – the blades we were getting here are like hoop iron.

The Trump : a new commanding officer

Lt-Col Corby had been transferred on 30 April, and the 2 ic Major Buttrose was promoted  Lt-Col and took command of the Battalion. 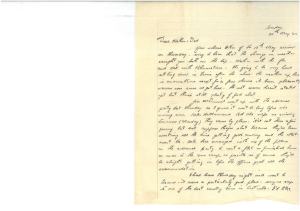 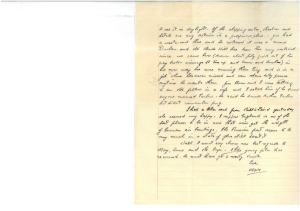 Your welcome letter of the 12th May arrived on Thursday.  Sorry to hear that the change in weather caught you both on the hop.  Mother with the flu and dad with rheumatism.  It’s going to be very hard settling down in Tassie after the show.  The weather up here is marvellous: except for a few showers it’s been pleasantly warm ever since we got here.  The wet season hasn’t started yet but there’s still plenty of feed about.

Jim McDonnell went up with the advance party last Thursday so I guess it won’t be long before we’re moving now.  Ack Hallam and Bob Cole’s wives are arriving tomorrow (Monday).  They came by plane – it’ll cost them a fair penny but don’t suppose they’re short because they’ve been working all the time, getting good money and the allotment too.  Ack has arranged with one of the fellows on the advance party to rent a flat or furnished house as near to the new camp as possible so of course they’ll be alright getting in before the officers grab all the accommodation.

I had leave Thursday night and went to Lismore.  It seems a particularly good place – everyone says it’s one of the best country towns in Australia.  I’d like to see it in daylight.  If the shopping centre, theatres and hotels are any criterion it’s a prosperous place.  Jim had a weekend there and he reckoned it was a second Durban and old Claude Hill has been there every weekend since we came here (drawn about forty quid out of his pay book – winnings at two up and Crown and Anchor) In his own way he’s more cunning than Tiny and is in a job where he’s never missed and can scheme duty passes any time he wants them.  Jim Glover and I were talking to an old fellow in a cafe and I asked him if he knew anyone named Farlow.  He said he knows Arthur Farlow but didn’t remember Pug (?)

I had a letter card from Billie Laird yesterday.  She seemed very happy: I suppose England is one of the best places to be in now that we’ve got the weight of German air bombings.  The Russian front seems to be very much in a state of flux still, doesn’t it?

Well I must say cheerio now.  Best regards to May, Anne and the boys.  I hope young Peter has recovered – he must have got a nasty knock.

I guess it won’t be long before we’re moving

The Battalion moved to Caboolture in Queensland on May 27, and began making camps astride the road four miles north of the town.

My Dear Max.  Merry Xmas.  Have one on me.  Well Max I am going home on leave on the 29th for 7 days which means I am getting home for New Year.  Boyo Boyo am I happy.  Hold me back from Home now & I think I would collapse.  Your most wonderful gift arrived – many many thanks – you certainly are a good friend.  My thanks again – they are beautiful.  I am so happy at getting home I could jump over the moon.  Lots of love.  Billie xxxx 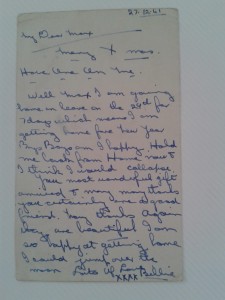