The line certainly must be busy: queueing to make a ‘trunk call’ 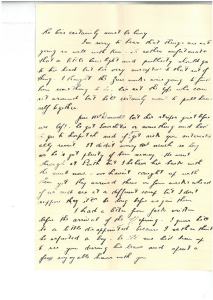 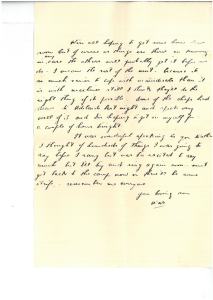 No address or date – approx April 10

Wonderful news – the best I’ve ever had – absolutely marvellous Mother to hear that your goitre has gone and the operation was so successful.  When I read your thirtieth of March letter soon after we made camp yesterday I was thrilled to bits.  By Jove it’s great – but I guess you feel lost without it.

Things have certainly been happening in the home circle in the last few months and everything seems to have dome out well.  Youngster’s latest letter strikes a much more cheerful note.  She seems so much better in health since she left the office.  With that load of worry off her mind and plenty of fresh air I hope she’ll soon be on the high road to better health.

It’s a long time since I had such a fine mail and so much good news.  It pepped me up to some order.  I’m at present at the local store trying to get a phone message through.  I put a call through about half past nine yesterday morning and it’s nearly one o’clock now and still waiting – the line certainly must be busy.

I’m sorry to hear that things are not going so well with Ken.  It’s rather unfortunate that a little limelight and publicity should go to his head but he’s very susceptible to that sort of thing.  I thought the Zinc Works were going to find him something to do.  He’s not the type who can sit around but he’ll certainly want to pull himself together.

Jim McDonnell lost his stripes just before we left.  He got tonsillitis or something and had to go to hospital and it you get sick you automatically revert.  It didn’t worry Mc much: so long as he’s got plenty of beer money.  He went through at Perth but I believe he’s back with the unit now.  We haven’t caught up with them yet.  They arrived three or four weeks ahead of us and are at a different camp but I don’t suppose that it’ll be long before we join them.

I had a letter from Jack written before the arrival of the offspring.  I guess he’ll be a little disappointed because I rather think he expected a boy.  He told me he’d been up to see you during his leave and spent a few enjoyable hours with you.

We’re all hoping to get some home leave soon but of course as things are there’s no knowing in any case the others will probably get it before we do – I mean the rest of the unit – because it’s so much easier to cope with individuals than it is with machines.  Still I think they’ll do the right thing if it’s possible.  Some of the chaps had leave to Adelaide last night and speak very well of it and I’m hoping to head in myself for a couple of hours tonight.

It was wonderful speaking to you Mother.  I thought of hundreds of things I was going to say before I rang but was too excited to say much, but I’ll try and ring again soon.  Must her back to the camp now or there’ll be some strife.  Remember me (to) everyone.

Such a fine mail

Your thirtieth of March letter : See below for the text of this letter.  It is likely that some of the earlier letters were still travelling around the world – but the comment about Ken Jenkins suggests that the letter of March 17 was also part of the exciting bundle Dad received on arriving in camp.

The main cause of goitre is Iodine deficiency.  When I was at school in the 60’s, we took iodine tablets to counteract the low levels of this element in Tasmanian soils and therefore grains and vegetables.  This is still a matter for concern in Tasmania : there’s current research underway at the Universit of Tasmania regarding a possible connection between delayed language development in children and the iodine deficiency http://www.utas.edu.au/latest-news/utas-homepage-news/iodine-deficiency-study-to-be-funded-by-brain-foundation3

Trying to get a phone call through

Illustration from Soldiering On – the Christmas Book for 1942, published by the AWM

We haven’t caught up with the unit…

The rest of the battalion were in camp at Woodside in the Adelaide Hills.  It is possible the Carriers were at the Springbank Camp, close to the city, along with members of the 7th Division’s 21st Brigade.  The following information comes from the Facebook page – Thanks.Digger : Established in 1941-42, Springbank Military Camp was located on the south side of Daws Road (and west of Goodwood Road). Behind it (to the south) was Centennial Park Cemetery, which had opened in June 1936. Opposite it, on the north side of Daws Road, was the Cudmore Estate (‘Cudmore Farm’) where the Daw Park Repatriation General Hospital stands today.

During the rest of April and May, everyone in the Battalion enjoyed home leave on a rotational basis – up to 200 men on leave at a time, and sometimes the same number AWL.  This limited the types of exercises that could be undertaken by the remainder.  Those in camp – first at Woodside then at Casino in NSW and finally Caboolture in Queensland – were dispirited and frustrated.  In The Footsoldiers, Bill Crooks remembers (p 137) – Among those who had returned from active service, a period of dissatisfaction with army life in general, set in.  Most of them were temporarily unable to enter into the spirit of happy comradeship that existed prior to our return to Australia….Try as did the new CO, and the company commanders, not a great deal of spirit was shown in the minor exercises and reconnaissance sorties we tried to carry out. 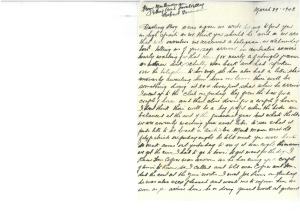 Darling Boy.  Once again we write hoping to find you in high spirits as we think you should be and as we are that way ourselves.  We received a telegram on Wednesday last telling us of your safe arrival in Australia.  We were hourly waiting for that news for nearly a fortnight as we knew Dick Schultz was back and had spoken over the telephone to his wife.  She has also had a letter.  She’s anxiously waiting him home on leave.  There will be something doing at 304 Liverpool Street when he arrives.  I went up to the club on Friday.  They open the bar for a couple of hours and then close down for a couple of hours.  I don’t think there will be a big profit when the books are balanced at the end of the financial year, but what’s the odds?  We are anxiously waiting your next letter to see what it feels like to be back in Australia.  Mick Mason met old Fitzpatrick on Friday night.  He told Mick you were back so Mick came out yesterday to see if it was right.  The morning we got the news I had to go to town to get meat for the dogs.  I knew Tom Cooper was anxious as he has rung up a couple of times to know so I called and told Mrs Cooper and Tom did the rest at the Zinc Works.  I met Joe Lewis on Friday.  He was also very pleased and wants me to inform him as soon as you arrive home.  He is doing guard work at Goodwood.  He is much improved in health since he left the institution.  There is no doubt it was getting on the poor beggar’s nerves.  I think it would have the same effect on me.  In case you have not received previous letters your mother has had her goitre out.  It has been done six weeks now.  She is still weak but you must expect that considering it was a major operation and she is not a youngster, but taking all things into consideration I think she is progressing well.  Laurie Fisher has gone deer shooting this week end.  He loves shooting something that can’t shoot back.  Alex Worbey has got to go into camp next Wednesday April 1st.  There is a lot of wailing and moaning in the Worbey camp.  The garden up there is in an awful state. Of all the rackets I’ve ever seen then apple & pear acquisition scheme is the worst of the lot.  Old Mark Rowe(?) assesses the crops in Lenah Valley.  They simply let the fruit fall off and do nothing as they get their cheque just the same.  There’s only about two or three orchards cared for in this district: old Jack’s and Calvert’s.  You’ll get a great shock when you come back and this scheme is properly explained.  There’s 75 percent of grub in the Valley.  Pat is very anxious to know if John is back.  She said she would ring me but she has not done so yet.  I have not seen anything of them – only over the phone as I have not been able to go and see them yet.  We are being rationed all right now – 1oz of tea per person from tomorrow per week.  The dogs are fit and well.  We will now close Max and we are hoping to see you soon.  God bless and keep you with best love from Mum & Dad.

Telegrams on arrival in Australia

The point of this scheme was to try to ensure that, despite losing their traditional English market, growers would continue to maintain the health of their orchards so that  after the war, exports could resume.  See http://trove.nla.gov.au/ndp/del/article/25926118 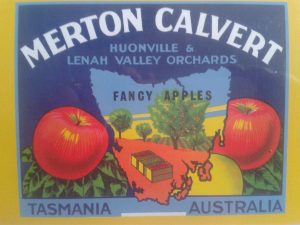 This is the only image I have been able to find, of an apple label from a Lenah Valley orchard – and it’s from Calvert’s: one of those of which Henry speaks highly. 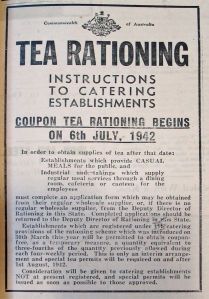 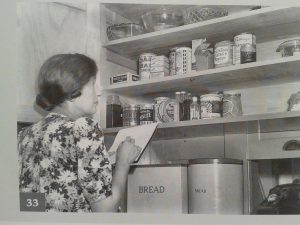 This entry was posted in leave, Letters to/ from others, organisation and tagged goitre, home leave, Jack Chandler, Ken Jenkins, Laurie Fisher, rationing. Bookmark the permalink.