A good thing for the war effort, that there’s a Labor government in Canberra. 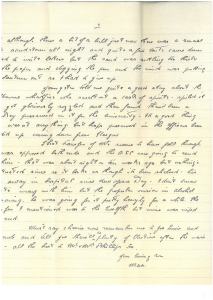 In spite of the Japs and everything else the postal authorities continue to do a hell of a good job.  There was quite a packet of air mail for the platoon today – some a bit late, but most of it in good time.  There were six for me including two each from you and youngster, one from May and one from a Sydney girl – a friend of Mrs Toomey who is quite a good correspondent.  I had awaited your letter anxiously as I was interested to know how the election went although I quite expected a big win for Labor especially as they were on top in the Federal House.  So Harry Hope made it eh?  How did that other chap get on – the shipping bloke – I forget his name – Tom McKinley?  He should have got in with that team.

I’m not surprised to hear that prices are soaring.  Wages never go up unless costs do too.  The way they’re pouring out the coin now, they’ll either have to bring in a new currency after the war or sterling will be on a dollar basis.  I think good stocks or real estate are the best bets for security.

Australia’s first Christmas under war conditions was a marked change to the usual spirit.  It’s a good thing for the war effort that there is a Labor government in Canberra: the workers accept conditions under them that would have to be enforced by a Nationalist Government.  It’s not before its time that holidays were cut down.  It’s quite interesting to contrast the present conditions and ideas with the almost comical attitude adopted in the first few months when recruiting was conducted among the unemployed and country districts and anyone else was considered mad.  I remember a certain officer telling me not to be a fool, that we were only sending one division to show the flag – a matter of Imperial Politics.  It’s certainly Imperial Politics now, but surely to Gawd they’ll sort things out better after this show than they did after the other.

May wrote a very interesting and amusing letter about Anne.  She’s certainly been having some big times lately.  May said she was quite thrilled with your Christmas presents.  I don’t suppose she met David when they came out – she’d like him and Suzanne too I guess.  I was quite surprised to hear May & Ben had been out – they’re certainly a great team.  I think I owe them a letter – one of these days I hope to catch up with my letters but of course you know the way they have in the army.

We’re doing a winter training stunt at present so of course have left the barracks and although that aspect of things suits us well, our surroundings are nowhere near as pleasant as the snow covered mountains of Syria.  We’re back on the sand so you know all about that.  This place is famous for thieves so guards and picquet’s will be plentiful – as a matter of fact I’m writing from the guard room now, and although there’s a bit of a lull just now there was a small scale sandstorm all night and quite a few tents came down.  I tried to write letters but the sand was settling too thick on the paper and clogging the pen and the wind was putting the lantern out so I had to give up.

Youngster told me quite a good story about the Melbourne wharfies who smelt out a cask of spirits – spiked it and got gloriously sozzled and then found there’d been a monkey preserved in it for the university.  It’s a good thing there wasn’t anything but hops preserved in the officers’ beer we did up coming down from Glasgow.

That transfer of Mc’s seems to have fallen through.  It was approved both ends and the ASC were going to send for him – that was about eight or ten weeks ago – but nothing’s eventuated since so it looks as though it’s been shelved.  He’s been away in hospital since New Year’s Day – I don’t know what’s wrong with him but the popular version is alcohol poisoning.  He was going for it pretty heavily for a while.  The transfer I mentioned was to the Twelfth but mine was wiped this end.

Must say cheerio now.  Remember me to Joe Lewis and the mob, and tell Joe there’ll be plenty of elections after the war’s over.  All the best to Mr & Mrs Phillips too.

The outbreak of hostilities in the Far East may ultimately effect the regularity of postal communications with Australia…Air Mail will probably not show its present regularity…some limitation of posting to light weight matter may be necessary…At this stage however it is not proposed to apply any limitation, and fps may make their air mail postings as hitherto.  Surface Mail will probably take longer…Cable service – continuing to function and EFM cables may be lodged as hitherto……In General – all or any of these services may be interrupted or curtailed through…the military situation….all ranks will be kept informed ….be assured that everything possible will be done to maintain postal services with the home country.

Several comments here respond to the 21 December letter from home, shared in the post dated 29 December 1941. (including the one about many more elections after the war…)

Tom McKinley was indeed elected.  He performed substantially better than Harry Hope who secured a seat on preferences – some of which must have flowed as Dad suggests from the Nationalists. For a full list of candidates and results see https://en.wikipedia.org/wiki/Results_of_the_Tasmanian_state_election,_1941

Prime Minister John Curtin’s message to the Australian people entitled ‘The Task Ahead’ was published int he Melbourne Herald on December 27 1941.  It included the following :  Australians must realise that to place the nation on a war footing every citizen must place himself, his private and business affairs, his entire mode of living, on a war footing. The civilian way of life cannot be any less rigorous, can contribute no less than that which the fighting men have to follow.  I demand that Australians everywhere realise that Australia is now inside the firing lines.

Curtin’s message to those serving overseas

In the name of the Australian Government and the Australian people I send you warmest greetings from your homeland.  As you stand guard at the outpost manning the battle station, be assured that our thoughts are ever with you and more particularly do we feel for you, as we know you do for your home folk, at Xmas time.  It is very true that Xmas is amongst the vitalities for which we are fighting – not Xmas as a holiday period but Xmas as a symbol of the Christian way of life – a way that our three enemies of the axis would destroy along with our free institutions should they emerge victorious from this struggle.   Today in Australia there is not the Xmas holiday period as you knew it.  We are on a complete war footing, with all that it involves brought vividly to the minds of the people.  To you, our fighting men of the three services and to our women of the nursing services, I send the greetings of Xmas with all the warmth of the great hearts of your kith and kin.  And for 1942 let us be stouthearted, stand unitedly together and we can have complete confidence in the outcome.

The officer’s comment – Don’t be a fool: we’re only sending one Division to show the flag – reflects what was indeed a widely held view in Australia, in late 1939/ early 1940.

A winter training stunt…a move is on!

From The Footsoldiers:  On the night of 12 January the Division was ordered to return to Palestine.  The situation in the desert was not good.  Rommel’s counter-attack was again driving the Desert Army back.  On 14 January we em-bussed and with the tearful farewell of the crowds of citizens of Tripoli ringing in our ears set off down the coast road for Palestine.  Debussing at Haifa, we boarded a train six hours later.  We arrived at the hot, flat area of the Khassa tented camp in Palestine at 1700 hours on the 15th….At Khassa intensive six-day training exercised commenced with three nights out, becoming the routine.  Range training in musketry and with grenades, unarmed combat and bayonet fighting, in the bull ring system, soon brought the battalion to the eve-of-battle tense-ness that we had had prior to Syria….All leave was now stopped, and although most had visions of action in the Western Desert, some were now talking of the events taking place in the Pacific.  The Japanese had invaded Malaya and our 8th Division there was in action. The Americans in the Philippines became news as places such as Corrigidor and Bataan began appearing in the local Palestine Post and AIF News.  We were reading that our whole Militia Army had been called up for full time service and the Americans had begun to land in Australian camps.  Rumours now began to circulate that we in fact would be posted to the Far East and not the Desert… (p132)

Photo – from The Footsoldiers

Monkey in a barrel

The report below contains an account from the Sydney wharves which basically the same story – I guess it’s possible that a similar thing might have happened in Melbourne:  http://www.housing.nsw.gov.au/NR/rdonlyres/B4A06A4B-5976-4824-90E3-F67322B7B923/0/MillersPointOralHistoryProjectSummaryReport.pdf

Don McWorthy recalled :  There was a couple of wine barrels (in the ship’s hold) made out of oak and a few of the old wharfs were alcoholics, so they got a little nail and went in between one of the boards in this oak barrel and they got a cup and tasted it and they said ‘Oh that’s all right, that’ll do us’.  SO no-one went to lunch and they  wouldn’t send it up onto the wharf in the crane.  And then a couple of days letter this guy comes down and puts is head over the hatch and said ‘Is there a couple of oak barrels down there?’  They said – ‘Yeah, it’s beautiful – what is it?’…And he said ‘Well I’m from the Sydney University and there’s a preserved monkey inside there’…So they finally put it out on the wharf but there was a lot of sick people after that.

Nothing but hops in the officers’ beer