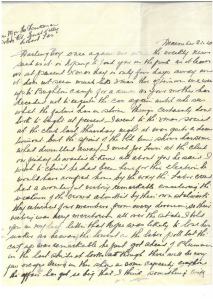 Darling Boy.  Once again we write the weekly news such as it is hoping to find you in the pink as it leaves us at present.  Xmas Day is only four days away and it does not seem much like Xmas.  This afternoon we went up to Brighton Camp for a run as your mother has decided not to register the car again until she sees what the …. has in store.  Things certainly don’t look too bright at present.  I went to the Xmas social at the club last Thursday night.  It was quite a decent turnout but the spirit of the old time shows has somewhat dwindled away.  I met Joe Lewis at the club on Friday.  He wanted to know all about you.  He said “I wish to Christ he had been here for this election: he would have romped home.”  By the way, the Labor crowd had a wonderful victory – remarkable considering the weakness of the crowd, admitted by their own stalwarts.  They returned four members from every division so their victory was very meritorious (?) all over the state.  I told you in my last letter that Hope was likely to lose his sinker (seat?) as he was the lowest on the Labor roll but the cut up was remarkable.  He just got ahead of Plummer in the last stride.  It looks as though there will be very few escape being in the show in some capacity.  Anyhow the affair has got so big that I think something will collapse during 1942 when a country with vast potentiality(?) like America gets going properly I think it will make a wonderful difference.  You should have plenty of pals now as all the Aussies are being kept together.  I was up at Mrs Schultz one day last week.  Poor old Auntie didn’t look too good.  She has just come out of St Helens.  Rather slow after having a breast off.  Maggie didn’t look too bright.  I think she wants her Dick home badly.  We went to town one day last week and bought a new blackwood bed.  We pulled the old one down & put it in the cellar.  You wouldn’t credit the difference it made in the room.  We had that bedstead for about 32 years so you can imagine how we miss it.  Mr Elliott rang your mother this morning.  They are coming up tomorrow night.  Mrs Phillips rang up this morning to know about cherries for her shop but as we have let the place to Kile for his cows you can imagine how the cherries look.  Your mother is sending you a parcel – a rather big one.  In future she will send smaller ones.  Anne has not been too well the last few days but I think she will soon recover.  Don’t send any more parcels.  Spend what money you get on yourself.  You mother might go down to Mae Menzie’s one day after the holidays.  She has invited me down several times .  We had the lamb shorn today.  She had fifteen pounds of wool on.  I hope she does not get a cold as the weather is so changeable .  The dogs are fit and well.  That’s about all I can think of Max so will now close.  God bless and keep you with best love from Mother & Dad.

PS When you come home you will find things an enormous (amount) pricier – beer 8oz for sixpence in all country pubs, 9oz in Hobart ales 1/5 [17 pence], about half the quality of when you left.

From 1906 to 1959 each of Tasmania’s five electorates returned 6 members to the House of Assembly.   Prior to the 1941 election, Labor with Premier Robert Cosgrove held 18 seats and the Nationalists 12.  As a result of the election, Labor’s majority increased : as mentioned in the letter, each electorate returned 4 Labor and 2 national representatives, giving a total of 20 Labor 10 Nationalist.  Henry Hope was indeed lucky to be elected, when other candidates’ preferences were distributed.

Dad had stood as an ‘Independent Labor’ candidate in the 1937 Federal election, for the seat of Denison.

‘all the Aussies are being kept together’ ??

Not sure what this refers to….I can find no information about reorganisation of the BEF (British Empire Forces) to suggest that Australians would no longer be fighting alongside British, Indian, South African…etc troops.

Darling Boy.  Once again we write hoping to find you in the pink as it leaves us at present.  Once again Xmas is over and our thoughts go back to the happenings of the past twelve months and wonder what the next twelve months has in store for us.  The weather has been delightful – a little bit too warm if anything but I don’t remember better weather for many years.  But shortages of petrol and national security regulations from Canberra curtailing all holidays except Xmas, Boxing Day & New Years Day, all shops to close at 6pm, no dog racing at night….no one allowed to go on holidays from the Zinc works – you can quite imagine how things are here.  There’s a serious shortage of fruit pickers and the government is pleading for people to take on the job.

I was waiting for a tram in Macquarie Street on Xmas Eve.  Dr Gibson looked at me very hard & said Are you Mr Hickman?  I assured him I was.  He said he thought I was dead a long time back, (but) looked like living a long time.  A chap named Hughes built a five roomed brick house next to May’s.  It has been finished about three months is still empty and for sale.  He wants a fair (or paltry?) price but doesn’t look like getting it.  I think Alby and Alec Worbey must be having a tough trot in their business but neither of them are in khaki yet.  They will have to be pushed in if they are to come at it.  Old Ted and Mrs Elliott were up here a few days ago.  Old Ted is having radium(?) treatment for a dry scab on his face.  Sounds like cancer.  Mrs Elliott seems very unhappy – he never gives her any money.  May Mezie & Ben and the ….(page 2 missing)

This article from the Hobart Mercury describes the Government’s efforts to support fruit growers’ efforts to find pickers.  It notes that 100 employees of Charles Davis Pty Ltd had volunteered to spend the weekend picking fruit in the Derwent Valley.  http://trove.nla.gov.au/ndp/del/article/25842488

This entry was posted in Letters to/ from others, Tasmanian and tagged Christmas, elections, family matters, rationing. Bookmark the permalink.