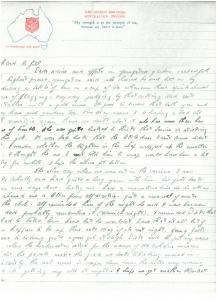 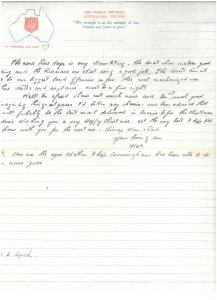 Once again the big day of the week comes round and the good run continues – this week I had three letters – Dad’s, Youngster’s and May’s.  Between dad & Youngster they painted a very descriptive picture of the cup and the scene on the lawn after the deluge – what a pity it rained, but it was certainly Bill’s day out – fancy drawing the first and second horses.

It was good to know that Youngster’s parcel made the grade.  I hope yours had the same success Mother.  I’d quite given them up as lost and was saving my pennies to buy a couple more of those boxes, but now Youngster’s has got through there’s a big chance that the one I sent for you has also made the grade.  I had a very pleasant surprise too this week – an absolutely marvellous Christmas cake from Youngster – when I opened it the mob gathered around and vied with one another in expressions of appreciation – expressions were even more strongly expressed when I cut the cake.  I’d have liked to seal it up and keep it for Christmas but there are many factors militating against keeping parcels in the barrack room.  Firstly of course there’s no place for anything other than military equipment and secondly experience has taught us the futility of hoarding in the army and thirdly and this was the deciding factor – three chaps who have been attached to us for about six months had to return to their units.  They were jolly good fellows – one was my driver in action and we’d built up a strong friendship – among many other admirable qualities he was a good bridge player and his going has left a place in the four that will be hard to fill.

Dad’s advice and efforts in Youngster’s garden called for the highest praise.  Youngster said she cheered him and Bill on by producing a bottle of beer or a cup of tea whenever their spirits showed signs of flagging.  Anyway judging by that cutting dad sent, vegetables will be a gold mine.  It’s good to know that both you and May have good gardens too.  Poor May seems to be having a bad trot with neuralgia again.  There’s no doubt about it she has more than her share of trouble.  She was quite bucked to think that Laurie is sticking to his job.  It was bad luck that the little dress I sent Anne didn’t fit.  I wonder whether the blighter in the shop wrapped up the smaller one.  I thought the one I told him to wrap would have been a bit too big for awhile.  I hope the others fit better.

The other day when we were out in the carriers I saw Dick Schultz and had quite a long yarn with him.  He’s just back from nine days’ leave – lucky cow – had a marvellous time too, he told me.  He showed me a letter from Alf Mackie – quite a newsreel of events at the club.  Alf reminded him of the night he and I were barmen – dad probably remembers it (Munich night).  I reminded Dick that I had to take him home – but he wouldn’t have that at all. But if you happen to be up there, ask Mag if it’s not right.  Young Jack seems to be doing quite a good job at High.   Dick said he put my name in when the headmaster asked for the names of Old Scholars overseas.  If all the parcels make the grade we look like being snowed in – incidentally the real snow is creeping closer down the hills every morning and it’s getting very cold at night.  I hope we get another blanket soon.

The news these days is very stimulating.  The desert show makes good reading and the Russians are still doing a good job.  The desert turn out must be our biggest land offensive so far.  She’s real mechanised war up there – tanks and airplanes – must be a fine sight.

Well I’m afraid there’s not much news and I’m not much good at imagining things so I guess I’d better say cheerio.  We’ve been advised that this will probably be the last mail delivered in Aussie before the Christmas, so here’s wishing you a very Happy Christmas – all the very best.  I hope I’ll be home with you for the next one.  Chins up Mum & Dad

PS How are the eyes, Mother?  I hope Cunningham has been able to do them some good.

As in Britain, the Australian government was encouraging people to grow their own vegetables and keep their own fowls, to ensure as much food as possible could be available to the troops.  This newspaper articles describes how best to use a suburban block to provide vegetables for a family : http://ergo.slv.vic.gov.au/explore-history/australia-wwii/home-wii/food-shortages-rationing     Also, the dry spring in key vegetable growing areas was pushing up the price of vegetables in Australia.  The Central Queensland Herald of 27 November lamented the demise of fruit and vegetable hawkers  from the streets of Brisbane:

It doubtless will have been noticed in the last communique of The Bulletin’s Brisbane correspondent that there has been a severe slump in the street hawking industry in the metropolis…”The high price of petrol and the rationing of fuel, combined with the high price of fruit and vegetables due to the drought, has caused an almost total disappearance of the fruit and vegetable hawker from the streets of Brisbane” says the correspondent.  “At one time the raucous howls of a vendor or a cheap line of cabbage or carrots would shatter the suburban afternoon nap as effectively as a bomb, but today the hawker’s throaty yell is no longer heard.  He has departed for parts un-known, like his brother the fish seller, his distant cousin the firewood vendor and his despised poor relation the bottle-o.”

Although not from the 2/33rd and somewhat further north (Aleppo area rather than Tripoli), this photo conveys something of the conditions AWM 011414

Another initiative at this time was the establishment of Ski Patrols.  Personnel from each Battalion were selected for a training program to be held at The Cedars in northern Lebanon.  Some of their training program was recorded on film by Frank Hurley : see AWM F01154.  The CC of the 2/33rd’s Ski Platoon was Lieut Balfour-Ogilvie.

I was astonished to read in the Routine Orders of November 22 that a soldier had been Court Martialled for stealing ‘one blanket, the property of the Commonwealth of Australia’ and that his punishment was 40 days’ detention. Although Dad doesn’t mention the standard issue, I assume it was 4 blankets, as there is reference to blankets in a later Routine Order (24 December) ahead of a move to Egypt: Four per man will be carried by personnel.  The fifth blankets will be rolled into bundles of 10…

The course of the war – Western Desert

For a very up-beat report on the war in the Western Desert (Presumably typical of those Dad was reading), see the Cairns Post of November 19 http://trove.nla.gov.au/ndp/del/article/42320816

The Club was the RSSAILA (or RSL) – Returned Soldiers’, Sailors’ and Airmens’ League of Australia.  Its headquarters in Hobart was the building photographed below in 1926.  ref http://www.utas.edu.au/library/companion_to_tasmanian_history/R/RSL.htm

This entry was posted in Camps and Barracks, Carrier platoon, Food and Drink, organisation, parcels, The course of the war, Uncategorized and tagged DIck Schultz, RSL club, vegetables. Bookmark the permalink.