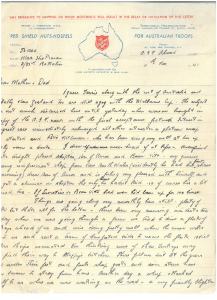 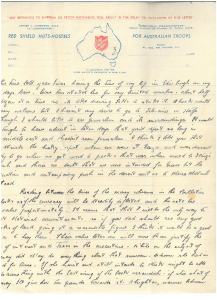 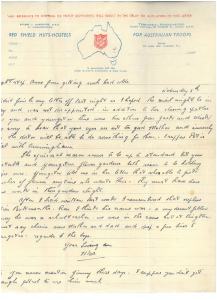 I guess Tassie along with the rest of Australia and probably New Zealand too are still agog with the Melbourne Cup.  The subject was not much discussed here until yesterday when someone brought in a copy of the AIF news with the final acceptances featured.  Interest in the great race immediately submerged all other interests – a platoon sweep was started and Pete McCowan – who has been doing very well at two up lately- ran a book.  I drew Yodvara- never heard of it before.  Unconfirmed reports tonight placed Skipton, Son of Aurous and Beau Vite – my gunner, a young reinforcement chap from New South Wales (evidently he had his first shave this morning) drew Son of Aurous and is feeling very pleased with himself, and Pete got a skinner on Skipton – the only horse he hadn’t laid – so of course he’s a bit pleased too.  If Lucrative or Beau Vite had won he’d been up for 100 livres.

Things are going along smoothly here still – plenty of work but that’s all for the better – there’s been very amusing incidents too.  One day when we were going through a farm we tried to drive a flock of turkeys ahead of us and were doing pretty well when the owner woke up to us and sent a team of barefooted kids to rescue the flock.  Still unless they’re evacuated I’m thinking some of those turkeys may yet find their way to Happy’s kitchen.  These fellows don’t let the grease grow under their feet and fowls, sheep, goats and even steers have been known to stray from home.  Another day a sheep attached itself to us when we were working on the road – a very friendly blighter but we didn’t have his company long.  A very withered, bandy-legged old lady came toddling up the hill in a great state of excitement, thinking we’d commandeered her sheep.  She came up to the sergeant, wringing her hands and muttering at the rate of a thousand words a minute.  Though no one understood a word she said, her gestures were most expressive.  It was no use trying to tell her the circumstances and the sergeant finally resorted to gestures too, walked over to the sheep and brought it by the string around its neck and placed the string in her hand and away she went, still muttering but this time with pleasure.

There was a battalion sports meeting last Sunday and transport was provided for those who wanted to go.  It was our first trip in rubber tyred vehicles over our roads and besides many severe shocks to our system it was a bit of a jolt to our pride.  We had thought or at least claimed when speaking of our efforts that we had built a wonderful drive but for a considerable portion of the trip we bounced from end to end of the truck – more often performing gymnastic gyrations than sitting or standing.  The sports meeting was the first we’ve had and though quite a success the events were not very well supported.  I had a go in a tug of war team (that also ran).  A feature of the turn out was the presence of the 25th Battalion pipe band – a hell of a good show.  Our Colonel took a fancy to them and is now trying to form a band for this battalion.

This time last year I was having the time of my life in Edinburgh on my six days’ leave.  Leave has started here for very limited numbers – about half a dozen at a time – so it’s like drawing Tatts to strike it.  A break would be very welcome but I haven’t any desire to go to Tel Aviv or Haifa although I should like to see Jerusalem and its surroundings.  It would be tough to have to admit in later days that you’d spent so long in the Middle East and hadn’t seen Jerusalem.  I think I told you that I’d struck the lucky spot when we were at Gaza and was dressed ready to go when we got word to pack – that was when we moved to Ikingi Matruh and there’s no doubt that we were intended for Greece but the evacuation and contemporary push in the desert sent us to Mersa Matruh instead.

Reading between the lines of the money columns in the Bulletin it looks as if the currency will be steadily deflated and the note lose its value proportionately.  It seems that will be the only way to meet National commitments so if dad should see any blocks of land going at a reasonable figure I think it would be a good idea to buy them.  Their value later on will more than justify the loss of interest and taxes in the meantime.  While on the subject of money, did May do anything about that sunroom-bedroom she had in mind for Anne?  If she hasn’t and still intends to, Mick might be able to do something with the east wing of the back verandah.  If she’s short of money I’ll give her ten pounds towards it.  A brighter, warmer bedroom might stop Anne from getting such bad colds.

I didn’t finish my letter off last night as I hoped the mail might be in today and was not disappointed.  In addition to two cheering epistles from you and Youngster there were two others from Jack and Mick.  Very sorry to hear that your eyes are not too good Mother and sincerely hope the doctor will be able to do something for them.  I suppose Pat is still with Cunningham.

The equinoxial season seems to be up to the standard but your vegetable and Youngster’s flower garden both seem to be holding their own.  Youngster told me in her letter that she’s able to pick bunches of flowers anytime she wants them.  They must have done some work in their garden alright.

After I had written last week I remembered that nephew of Jim Butterworth.  Ron I think his name was – a very decent fellow.  I fancy he was a school teacher – we were in the same hut at Brighton.  I must say cheerio now Mother and dad and drop a few lines to Youngster.  Regards to the boys.

PS  You never mention Jimmy these days.  I suppose you don’t get enough petrol to use him much.

Notice the different letterhead, compared with previous and following posts: ANY REFERENCE TO SHIPPING OR TROOP MOVEMENTS WILL RESULT IN THE DELAY OR MUTILATION OF THIS LETTER (etc)

Routine orders regularly included invocations to be economical with paper – even suggesting writing on both sides.  Most of dad’s letters are written on ‘air mail’ paper – i.e. tissue paper – where double sided use would have made the entire script illegible.  This particular batch is of a heavier quality – but it seems to be a ‘one off’.  I’m still amazed that paper and envelopes came in the ‘Comfort Fund’ parcels – rather than being basic army issue items.

The Melbourne Cup is Australia’s most famous horse race and Ken Howard possesses one of the most recognised voices in race calling in Australia’s history. The 1941 Melbourne Cup was won by Skipton, carrying 47.6 kg at 8/1. He was ridden by W Cook, trained by J Fryer and the prize money was £7,700.

Howard starts his race call evenly and clearly: ‘They’re racing now in the Melbourne Cup of 1941.’ He then goes through the field of horses as they head through the first furlong, then he repeats the placings in trademark fashion until close to the line when he focuses on the leading horses. Such detail allows listeners to hear where their fancied horse is placed as the race progresses. Keeping pace with the horses, Howard gradually builds up the drama and speed as the horses approach the finish line, taking the listener right with him.

(I wonder if the troops actually heard the broadcast, at some point – if so, the gunner would have been even more excited because for most of the race his horse was well back in the field). 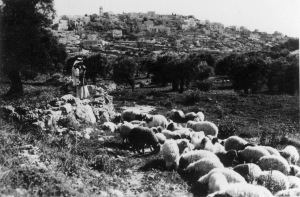 It’s easy to see from this photo how simple it would be for a sheep to wander from the flock.   Source: soundslikewish.wordpress.com 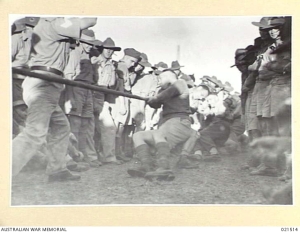 According to Battalion and Brigade diaries, there was a cricket match between the 25th and 21st Brigades on Sunday November 2. The Brigade Sports Day mentioned in various official documents appears to have been scheduled for November 9 but to have actually taken place on November 16 (delayed due to bad weather).  As Dad doesn’t mention the cricket, I wonder if what was happening on November 2 was some sort of lead-up to the ‘main event’, with the cricket happening in another location.

It may be, that in terms of the Company he was with, including the Carrier platoon, only six men were on leave at any one time, but according to The Footsoldiers – In November the two days a month accumulated recreational leave system started and was made retrospective for those overseas since 1940.  Providing each of us had sufficient pay coming to us, ten days leave was approved for fifteen percent of the unit at a time.  Soon men were enjoying leaves in Haifa, Tel Aviv, Jerusalem, Alexandria or Cairo, wherever they elected to go….

No doubt we were intended for Greece

The Battalion’s movements in March-June 41 (from The Footsoldiers) certainly suggest that plans were made and re-made as the war in the Balkans progressed:

(20 May – German paratroops descend on Crete)

You don’t mention Jimmy these days…

Jimmy Austin was the family car.  I don’t know what particular model of Austin it was.