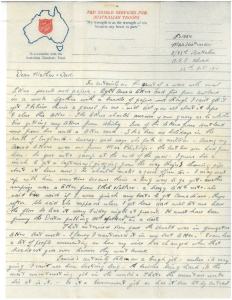 I’m certainly on the crest of a wave with mail – letters, parcels and papers.  Eight Aussie letters and five from Scotland in a week, together with a bundle of papers and though I can’t get it yet I believe there’s a parcel for me – will tell you all about it before I close this letter.  The letters should answer your query as to whether I’m getting any letters from Shirley.  Two of the letters from Scotland were from her and a letter card.  She’s been on holidays in the south of England – and says she feels a million.  Among my Aussie letters was one from Max Phillips – the best I’ve had from him – he goes into camp at the end of the year.  I guess he’s a cinch to get a captaincy (judging from the way they’re throwing pips about at home now).  He should make a good officer too – I may meet up with him sometime because there’s a long way to go yet.  Another surprise was a letter from Ellen Walker – a breezy little note – she said Perc said if I ever pinch any boots to get Canadian – they’re softer.  She said she supposed when I get home dad will let me have the floor – he has it every Friday night at present.  It must have been funny, the Doctor putting Mrs Jones on a diet.

That interview Ken gave the Herald was in Youngster’s letter last week.  I fancy I mentioned it in my last letter.  I can hear a lot of people commenting on how my voice has changed when that broadcast goes over, however they won’t know.

Laurie’s certainly taken on a tough job – unless it’s easy going I can’t see him lasting long – besides being hard it’s the most uninteresting job in the world.  That’s the munitions works he’s at, is it?  Is it a Government job or has it been let by contract?

I’ve not seen any Syrian stamps in Tripoli but if I can strike anyone going to Beyrouth I’ll get them to buy a card.  Cards of used stamps are sold in the streets so you can expect them in the next letter.  Between your letter and youngster’s I’ve got a pretty fair text of the Budget (Fadden’s).  It’s certainly severe and youngster raises a rather moot point when she says where’s the money coming from to repay the loans.  Still the first job is to win the war.

You sound as though you’re going in for turkeys in a big way but I don’t suppose the whole setting will come good – anyway they should be pretty right by Christmas twelve months.  They go in for poultry a lot over here – in fact if you have a meal away from barracks it’s not safe to order anything but poultry.  Their mutton usually consists of old goat and their steak is I’m afraid broken down camel.  Whilest on the gastronomical outlook our tucker’s improved a lot lately.  In fact for the last week we’ve had Aussie beer – a rare treat.

I had got so far yesterday afternoon when one of the sergeants came in and told me I had the town guard so of course letters must wait.  Before coming down I collected my parcel.  It was from Mae Menzie – a tin of cooked apples.  We bought a tin of cream at the canteen and had them for dinner today – by Jove they were nice – the first real cooked apples we’ve had since we left home.  Just cooked to a turn, they made a fine dessert after our stew.

This morning (through the medium of one of the chaps who speaks French pretty well) I got some stamps from the fellows working at the fire station – quite a good collection too.  They should please your correspondent well.

We’ve been getting a foretaste of winter this week – rain and cold.  The snow is fairly thick on the mountains so we’ve got a fair idea how things are in Russia.

The other chaps were getting photos taken this morning so I thought I’d get mine taken too.  We’re getting them at five o’clock but I’m not very sanguine as to the job.  There were two fellows in the studio.  One was out in the direction in which I’m looking and lining me up sort of business and the other fellow pulled the trigger so I’m expecting something rather vacant or starry – unless they’re too bad I’ll put one in this letter.

Must say cheerio now.  Best regards to Tom & Dorrie and Tom & Mrs Cooper and the boys.  I hope they’ve recovered from their rheumatism.’Love

…if I ever pinch boots to get Canadian….

It seems there was quite a lot of ‘pilfering’ and ‘trading’ going on.

The CO’s Routine Orders of 8 October lists a remarkable array of ‘Stolen Arms, Equipt etc’ – including a revolver, a pistol, aLMG and magazine with 20 rounds of ammunition, a case containing electrician’s tools, binoculars, clothing including boots, kit bags, haversacks, a table radio and a spare wheel!!

On 13 October, Routine Orders included the following – Loot and Traffic in Arms :  It has been definitely established that members of HM forces have been selling captured arms and ammunition.  From this, it is clear that the existing orders on this subject are not being obeyed….Anyone who disposes of captured arms…is directly assisting the enemy…Such action is an offence punishable by a sentence of two years imprisonment.

Another perspective comes from interviews of veterans undertaken as part of Frances Miley’s research as the National Archives Frederick Watson Fellow in 2005, and quoted in a paper she presented the following year:   http://www.naa.gov.au/Images/Miley_tcm16-35762.pdf

Clothing … we flogged all our old stuff to the Arabs. (Private, Middle East)

In the Middle East, the locals were starving. We traded with them. A tin of bully beef was worth a dozen eggs. They had free-range chickens and there were always eggs. We traded a lot. The local railway station was the place to trade. A tin of bacon got a really large quantity of eggs … I forget how many. We got oranges, tomatoes and other things that way too….(Lieutenant)…

Photo AWM 008752  Caption: The Arabs, although of a friendly character and generally without vice, are inherently kleptomaniac so that when an Australian unit found much of its equipment was missing the local headman was rounded up and persuaded to help in the search which proved quite successful.

Further to this caption, an extract from an article entitled Loot on the Instalment Plan, published in the ‘Christmas Book’ Active Service: with Australia in the Middle East –

‘Mafeesh abaden’ the village headman says with determination and an air of finality.  ‘There is nothing at all’.  As the interpreter harangues him, prompted by the salvage office, he interpolates again and again ‘Mafee, mafee, mafee’.  He denies savagely.  He denies with pathos.  The battle of wits goes on perhaps for hours.  Certainly it is never brief.  Then the headman concedes that he has a few small things – an aluminium dixie, a roll of blankets, an empty oil drum.  He produces them with a grand gesture while his sons, all chips off the old block and all apparently the same age, look sulkily on.  They see their work as the family scavengers wasted.  But this is nothing – only the first instalment of a long repayment, with the looter fighting every inch.

‘What about the rifles?’  ………..  Pontifically the salvage man frowns and the headman waits as a runner waits for the gun, ready with as many denials as he has items of loot.

We have blankets, ammunition boxes, batteries and so on; but what about the greatcoats, clothing, limber wheels, pins, boots and…rifles.  ‘Mafeesh abaden’ the mouktar wails.  ‘Nothing, nothing at all’…..Then he produces two pairs of badly worn issue boots and promises to check up on the villagers.  Honour is saved and he probably knows just where to lay his hands on all the stuff.

The boots do not seem worth salvaging but they must be taken on principle.  It’s the old story of the inch and the ell.  Winner takes all in the salvage game.  If he does not, her is brewing trouble for himself and the contempt that the shyster has for the sucker.  He must take everything, see everything, believe nothing, and never, never take nothing for an answer.  (VX17681)

The job is to win the war

The Adelaide Advertiser reported on October 8 1941  that new Prime Minister John Curtin had launched a ‘War and works loan’ at a public meeting in Sydney. (http://trove.nla.gov.au/ndp/del/article/44960764) He said that 100 million pounds was needed, and encouraged every Australian to support his appeal.   ‘He appealed for voluntary contributions to the loan and expressed his opposition to the people being called upon to make compulsory loans to the Government.  Mr Curtin was received with great enthusiasm and 2,000 people who were unable to enter the hall cheered the new Prime Minister enthusiastically.’  The former PM Arthur Fadden can be seen in the bottom right of the photo.  He also spoke at the meeting, emphasising his solidarity with the new PM: ‘The Government of the Commonwealth, no matter what Government it is, has a great responsibility today.  I care not what Government is in power in Australia.  Politics do not count.  We must and we will win this war.  Nothing else matters’.  The Minister for the Army, Mr Spender, used the opportunity to express his regret that recruiting was falling off.

The Menzie family were close friends, and were apple growers in the Huon valley. The tin in question would have been filled at the Henry Jones factory on the Hobart waterfront, and might have carried this label.