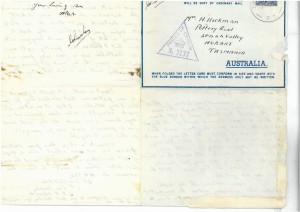 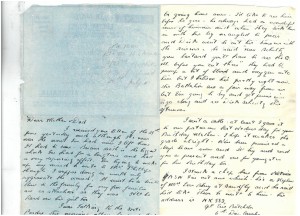 I received your letter of the 29th June yesterday and although its news was the worst I’ve had since I left home it had to come.  Brian’s death is the biggest shock I’ve had for a long time and had a very depressing effect.  I’m trying to make up my mind to write to Mrs Phillips though I suppose doing so would only aggravate the wound.  It must be a terrible blow to the family for very few families are as attached as they were.  It’ll be hard on his girl too.

I was talking to the 31st’s Padre this morning after he conducted our church service.  He expects Ken to be going home soon.  I’d like to see him before he goes – he always had a wonderful sense of humour and when they took him in with his leg mangled to pieces and Dick went to cut his trousers with the scissors, he said “now Schultz you bastard you’ll have to see the QM before you cut those”.  They had to pump a lot of blood and oxygen into him but I believe he’s pretty right now.  His Battalion are a fair way from us but I’m going to try and get permission to go along and see Dick Schultz this afternoon.

I sent a cable at least I gave it to our postman last Wednesday for your birthday Mother.  I hope it makes the grade alright.  We’ve been promised a day’s leave soon and I’ll try and send you a present and one for youngster for her birthday too.

I struck a chap here from Victoria or NSW – I’m not sure which – he’s a nephew of Mrs Len Abery (?) at Sandfly and he said he’s like them to write to him – his address is

so if you happen to see Mrs Morley you might give her the message.  Must close now Mother.  Best regards to all

Brian Phillips was a signalman who at the time of his death was posted to HMAS Moreton Bay. His service record shows he died at Mearnskirk Hospital, Glasgow, on June 25th 1941.  The diagnosis was ‘cellulitis of the face’.

Ken Jenkins was a corporal in the RAP (Regimental Aid Post) or CCS (Casualty Clearing Station)      of the 2/31 Battalion – one of the three battalions in the 25th Brigade.  He lived with his wife in Glenorchy (at that time a northern suburb of Hobart – now designated a city).  Ken enlisted on the same day as Dad and had the next service number – TX1005.  In an earlier letter, Dad says he was a stretcher bearer.  He was clearly a close friend who knew Dad’s family well, as there are frequent references to his liking of ‘the pater’s wine’.   Ken’s service and casualty record shows that he was wounded in action on June 14 1941, suffering a compound fracture of the left femur, with severe shock.  This injury resulted in amputation of the leg above the knee at the 7th Australian General Hospital on July 4.

This entry was posted in Uncategorized and tagged Brian Phillips, Ken Jenkins. Bookmark the permalink.