Surprising capture of a French sniper Written in pencil – barely legible (scan is much clearer than the actual document) – was not able to rotate image before inserting.

I’ve had two very welcome letters from you during the last week.  Thanks a lot for the stamps and casualty lists.  They don’t waste much time getting them through do they.  Ken should be on the road to recovery now though I suppose it will be some months before they send him home.  Haven’t seen or heard anything of Dick Schultz but I fancy he’s been kept busy judging by the reports of his show.  Our sections are in reserve at present and are resting on top of a seven thousand foot mountain – the one alongside us is nine thousand.  The day we took up these positions we were paid and by way of a diversion the sergeant suggested a game of two up – so the dice (dina?) were produced but the diversion was short lived because the sergeant himself put an end to it by doing seven heads – and as he was well cashed at the start and backed himself to the limit, not only got all our pay but holds a mortgage on our pay books for some time to come.  Later in the day the Brigade canteen truck came up and did the honours to the extent of a bottle of beer each – two bottles of gin and two of lime(?) between the section, but as I’m not at all partial to gin the others had that.  He also brought a quantity of tinned fruit and other luxuries and for a couple of days we lived like lords.

Had a letter from Ivy and another from Jack yesterday – both very cheery epistles too, although the youngster still seems to be having a bad time.  They both lamented the new petrol rationing.  You never mention it in your letters, so I hope that means you’re getting plenty and not that you’re not using the car.  It seems hard to imagine petrol rationing over there but I suppose the combined services must be using millions of gallons daily – or hourly for that matter.

Youngster told me all the political news and agrees with all the redoubtable Robert has to say but laments his apathy towards conscription – she was quite hot on the matter but that’s one thing that’ll never even be put to the vote.  It wouldn’t get much support over here anyway and it would be rather futile to ask those who are staying home to vote (for) conscription.

So Larry’s on the way at last like the rest of us.  I suppose he couldn’t get away soon enough but after he’s been away a few months the boot will be on the other foot.  There’s nothing truer than the expression ‘you’ll be sorry’ though personally I’d like to see it through. Bad luck about Abe Herbert – any further news of him – he was with the twelfth I think.

Well that’s all for the present – excuse pencil.

Mortar attack at midday – kerosene tin in which boiling tea smashed to bits – at 7 o’clock runner brought word that we were being relieved by Tommies at dusk – sent down valley to meet them – about 700 yards from Kirbi – about nine 30 heard heel click on stone – turned to see French soldier about ten yards away.  Started – called on him to stop.  Frenchman surprised – before recovered had snatched his rifle from him – took bayonet and binoculars and brought him back to Kirbi – French sniper – my lucky day – little short of miracle I wasn’t shot because I didn’t have a rifle – advantage of surprise – card in pocket drawing of swastika and Vive Hitler –

Left Kirbi 3am [June 30?]- rested all day out of range- 9pm moved in night convoy away over roughest, steepest and windiest road ever seen – every inch a hazard

In Jezzine section.  Most wonderful sight ever seen from 7000’ mountain – rugged country – small patches terraced and cultivated – many villages in distance – steam in valleys from coal seams – sea in distance – have never seen anything in any way comparable with this sight.

Back to D company.  Not much doing apart from artillery duels.  Stayed till show finished on Saturday. Leo Earea went back with malaria on Friday after breaking the mob at two up.

The 2/31st was indeed busy, meeting plenty of resistance in their march north along the coast, and sustaining plenty of casualties – so the RAP where Dick as based, would certainly have been a hive of activity.

A game of two up

These games clearly happened often – in camps, at sea and apparently while in  reserve.  Although Dick Lewis said he was unaware of any orders about this, the Battalion’s ‘Routine Orders’ do list prohibitions, from time to time.  This example is from 15 August 1941 …..Members of the AIF are forbidden to take part in any such game of ‘two up’.  Taking part in the game includes ‘keeping the ring’ or being present at a ‘two up school’.  Clearly, this order was not enforced.

According to Dick Lewis, Dad made a point of NOT disclosing to the company commander that the Frenchman was a sniper – Dick said that if that were known, the man would have been shot.

Like keeping diaries, the keeping of ‘enemy material’ was in fact forbidden.  The 25th Brigade Admin Instruction no.5 of 12 July 1941, advises – Kit inspections will be arranged by units and any articles of enemy material discovered will be passed on to salvage.  It will be an offence for personnel to hold enemy equipment or weapons.  (Brigade diary for July/ August 1941 – http://static.awm.gov.au/images/collection/bundled/RCDIG1024943.pdf)

Photos of the Frenchman’s binoculars : Now owned by one of Dad’s grandsons, my nephew Stephen Hickman 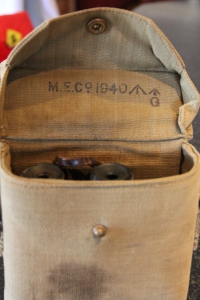 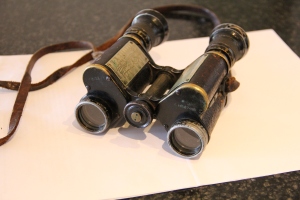 The move to the Jezzine sector 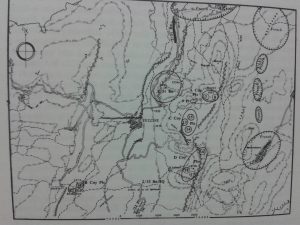 According to The Footsoldiers, the night move began at 1830 hours on June 30….The column moved off, led by the CO’s vehicle, followed by the carriers.  All windscreens had long since been removed from the vehicles and all driving was to be without lights.  The column was slow and tight packed.  …So bad were the twists and U bends that even the 15-cwt Fords had to turn and back up to negotiate the turns.  At 0100 on 1 July just south of Rihane the column stopped for a rest and all fell on the roadside and went to sleep…..At dawn on 1 July we were off again.  It was a bright, clear day, and all enjoyed the exhilarating mountain air….so high up were we that the early morning clouds were 500 feet below us….At noon the convoy stopped a mile north of Kafr Houn (Brigade HQ) and the battalion debussed.  Throughout the afternoon, a few by marching, most by shuttle service of unit vehicles, the companies and platoons moved up into the localities of the 2/14th battalion……In D Company, the move from the road head in the rear of the company locality took five hours, climbing 3800 feet to reach their positions.  All arrived sweating and dog tired…. 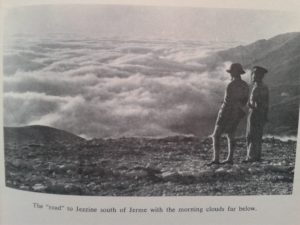 Image – from The Footsoldiers

However pleased we were that we were not taking part in any attacks, the days were dangerous and gruelling.  At dawn and dusk, patrols were continually going out…The nights were bitterly cold and the high mountain winds swept about us as we lay in the rock singers on the high mountain tops.  The French maintained a constant watch on movement and any at all would bring down a concentration of 100 shells or more.  At first light, noon, and at stand-to at dusk, all the company positions would be blasted with upwards of 250 shells.  We should set out watches by the bombardments….Throughout the period 1 July up until the orders to cease fire at midnight on 11 July, no great activity was undertaken by the battalion…..

Not much doing…apart from artillery duels

From The Footsoldiers:  D Company…did not move from its positions from 1 July until the surrender, and thus becalm a regular target for the French beyond Machrhara.  Upwards of 500 shells a day landed in and about this company’s locality.  After 7 July it became so accurate that the platoons were withdrawn to reverse slope positions….18 platoon was on the ester me right flank…sitting on Toumat and looking down and back to Jezzine or east to Machrhara…. 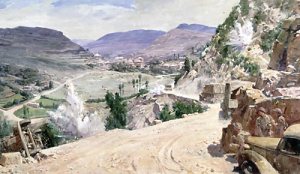 ‘The Mad Mile’, Jezzine, Lebanon 1941, William Dargie, 1970.
[Oil on canvas, AWM ART27683] – Vehicles had to run the gauntlet of French fire to maintain supplies to troops around Jezzine.

A detailed description of the reasons for the rationing scheme and the government’s difficulties in implementing it can be found at  https://www.awm.gov.au/journal/j36/petrol.asp  According to this article, there were cuts to private motorists’ rations in April 1941, and again in June:   The position was so critical by 11 June 1941 that the Minister told Cabinet that it was now “open to question” whether petrol rationing should be placed under Army control. Cabinet rejected this drastic solution and the Prime Minister announced on 17 June 1941 that private motorists’ rations would be cut to 1,000 miles per year 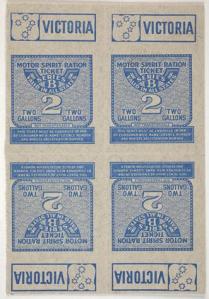 Image : from the collection of Museum Victoria

Sheet of four Victorian Motor Spirit Ration Tickets, each for 2 gallons. Dimensions: 120mm (height) x 82mm (width). These may date to 1941 when 2 gallon tickets were printed in blue.  These tickets were produced by the Note Printing Branch of the Commonwealth Bank of Australia.  Conditions state: This ticket must be endorsed in ink by consumer with name, licence number and vehicle registration number.   Petrol ration tickets were first issued in October 1940. 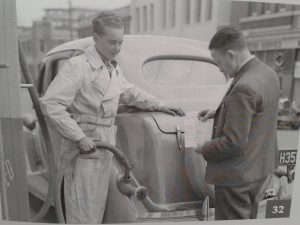 Service for a lucky motorist with ration tickets 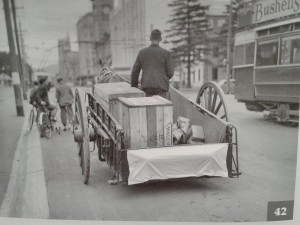 But there weren’t too many of them in Hobart…. 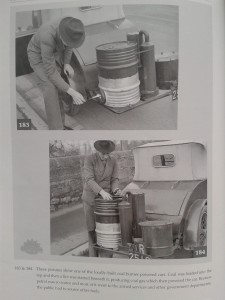 However, some novel solutions were implemented:

In this case – Coal was loaded into the top and then a fire was started beneath it, producing coal gas which then powered the car.

A letter sent to the editors of the (Melbourne) Age, the (Brisbane) Courier Mail and the Sydney Morning Herald expresses the views of a member of the South Australian Legislative Council, in support of conscription: