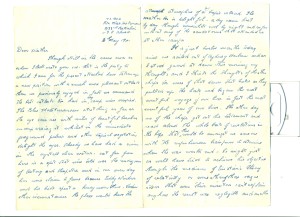 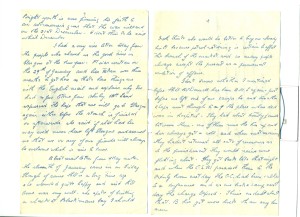 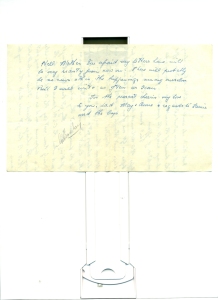 Though still in the same area as when I last wrote you, we – that is the party to which I am for the present attached – have taken up a new position with a much more pleasant outlook than we previously enjoyed.  In fact we command the best outlook I’ve had in any camp we’ve occupied.  The blue Mediterranean stretching as far as the eye can see with miles of beautiful beaches encompassing it whilst in the immediate foreground palms and other tropical vegetation delight the eyes.  Already we have had a swim in the crystal clear waters – not far from here is a spot that we’re told was the rendezvous of Antony and Cleopatra and in our own day has some claim to fame because Teddy Windsor and his bride spent a honeymoon there.  Under other circumstances the place would have the atmosphere of a tropic island.  The weather too is delightful – a dry warm heat by day though somewhat cool by night and so far without any of the sandstorms that attended us at other camps.

It is just twelve months today since we sailed out of Sydney Harbour and as I stood guard at dawn this morning my thoughts and I think the thoughts of the other chaps too were of that dawn that broke as they pulled up the hook and began the most eventful voyage of our lives.  The other day one of the chaps got out his testament and read aloud the whole book of revelations in the hope that there would be amongst us someone with the superhuman brain power to determine when the war would end.  He might just as well have tried to achieve his objective through the medium of Einstein’s theory of relativity or some other of those vague ideas that even their inventors can’t explain.  Anyhow the result was negligible and another bright youth is now pinning his faith to an astronomer’s guess that the war will end on the 21st December – I don’t think he said which December.

I had a very nice letter today from the people who showed us the good time in Glasgow at the New Year.  It was written on the 29th January and has taken over three months to get here so that’s how things are with the English mail and explains why I’ve had so few letters from Shirley.  Mrs Laird expressed the hope that we will go to Glasgow again either before the stoush is finished or afterwards.  She said if she’d had her way we’d never have left Glasgow and assured us that we or any of out friends will always be welcome which is nice to know.

A boat mail from May written the eleventh of January came in on Friday.  Though of course that is a long time ago she sounds quite happy and said that Anne was very well.  She spoke of building a shack at Blackmans Bay.  I should think she would do better to buy one already built because petrol rationing is certain to affect this branch of the market and so many people always accept the present as a permanent condition of affairs.

I don’t know whether I mentioned before that McDonnell has been AWL again.  Just before we left one of our camps he and two other chaps went through to the place where dad was in hospital.  They had about twenty pounds between them – one of them runs the two up and has always got a roll and when next morning they hadn’t returned all sorts of rumours as to the punishment they would receive were floating about.  They got back late that night and when the CSM paraded them to the orderly room next day the OC had been called to a conference and as we broke camp next day the charge lapsed.  There’s no doubt about that B he’s got more luck than any ten men.

Well Mother I’m afraid my letters home will be very scanty from now on.  There will probably be no news other than the happenings among ourselves.  But I will write as often as I can.

For the present, cheerio.  My love to you, dad, May & Anne & regards to Laurie and the boys.

Despite being detached to another Bn (2/2 Machine Gun Mn – see diary entry below), the censor of this letter is still an officer of the 2/33 – Graham Barclay.

Letters scanty from now on?

I assume Dad was anticipating being more engaged in action, sometime soon.  The siege of Tobruk had begun, and according to Bill Crooks in The Footsoldiers, parties were occasionally sent down to the wharf area to provide anti-aircraft cover for the landing of casualties brought out of Tobruk by the Australian destroyers.  Later in May – the 2/32nd Battalion that had been with us since England was loaded aboard destroyers and taken up to Tobruk.

McDonnell’s AWL : the luck of the Irish!?

Dad’s diary (previous blog entry) indicates he was also planning to go AWL to Alexandria (‘the place where dad was in hospital’) – but fate intervened!  Despite his melancholic reports of being fined etc for his own escapades, these were clearly more numerous than his record would suggest. 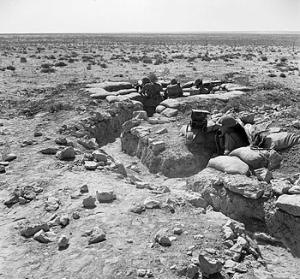 A much more pleasant location : Diary 27 April – 5 May

Dig trenches – church parade in dust storm – gave two letters (Mother and Youngster) – to Padre – more digging.  1 o’clock mess – Mr Copp told us we are going back to Mersa Matruh at 3pm – the close of another short camp except for bugs & fleas an enjoyable few days – went back to dug out – ate puddings & tinned fruit out of parcels and drank the beer we’d hoarded.  Orders to move cancelled – had a bath in 1/2 pint of water – saved enough water to make coffee – Luxury in Libya.

Put barbed wire in trenches – dug trenches – cleaned guns – had a feed out of some new parcels of Bob Cole’s – Tomato soup, plum pudding & peaches – got another parcel of tobacco from youngster and a calendar from Tim, Bill & Peter (‘Twelve Happy Months’) Wrote to Mae Menzie & Mick Mason.  Lost fountain pen – gawd knows where I’ll be able to get another one.  received letters from Mother, Youngster, Mick Mason and Jack Chandler – wrote to Youngster and Shirley.

fatigue at Battalion Hqrs – hardest day’s work since I left home – dug pit for ammo dump – Hot as hell and dry as buggery – no water drunk all day – finished job early and went for a swim in Musso’s lake – delightful crystal clear water – water pleasantly warm – walked back to dugout at 6pm.  Beach has some claim to fame because Teddy Windsor & Wally Simpson had one of their honeymoons here.  Borrowed clippers from Lieut Copp and cut Ross’s hair – to a succession of abuse and squeals – achieved a fair presentation of the 39 steps.  Ray cut my hair but was unable to take full revenge because of the difficulty of finding the hair.

Went for swim with Mick Patton – passed through Indian Labour Battn camp – massage each others backs with their feet – wrote to mother.  Bob Cole reads the book of Revelations from a Testament sent by a friend in the hope of working out when the war will end.  It’s like trying to work it out by Pythagoras’ theory.

S 11(? or SH?) rumour that Russia & Turkey have mobilised & German troops have occupied Finland – also that the Jerries are on our ….here – German convoy supposed to be sent – Later denied by Lieut Mills – Filled sandbags, made tea with rusty water out of old kerosene tin and tea with ratshit in it – cooling & refreshing – organised blitz on bugs – school day reminiscences – Woodes (?) chopped down the flagpole – Listening post guard – Heavy dew – cold as blazes.

recondition tunnels till 10.30 – Ned Turner came up and told us to report to Hqr Company – took our packs and blankets in carrier.  Had a feed at Hqr Comp.  – best feed for fortnight and then sent with Ray Ross on loan to 2/2nd Machine Guns – parcel from mother (another balaclava).  Four MG’s – Stan Wallen, Sam Barber, Eric (?) Boyd, P…Porter – sleep on 12,000 rounds ammo.  New post commands fine view of Mersa Matruh and Mediterranean.

Twelve months today since we sailed from Sydney.  The most eventful year of our lives.  Cleaned Vickers and parts.  Received nice letter from Billie Laird – answered same – walked down to Battalion Hqrs – had a bottle of beer and returned

Maybe he is starting to understand why the Bedouin are so frugal in their use of water??

Calendar from Tim, Bill and Peter

The ‘senders’ were the family dogs!