AWL from guard duty – but what they don’t know… 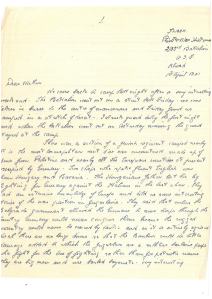 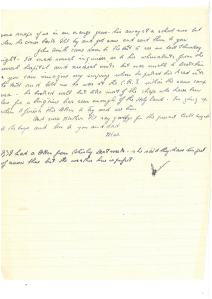 We came back to camp last night after a very interesting weekend.  The Battalion went out on a stunt last Friday.  We were taken in buses to the centre of manoeuvres and Friday night found us camped in a stretch of desert.  I struck guard duty the first night and when the battalion went out on Saturday morning the guard stayed at the camp.

There was a section of a Jewish regiment camped nearby.  It is the most cosmopolitan unit I’ve ever encountered, made up of Jews from Palestine and nearly all the European countries ar present occupied by Germany – two chaps who spoke fluent English were from Hungary and Bavaria.  The Hungarian’s father lost his leg fighting for Germany against the Italians in the last show.  They had an extensive knowledge of Europe and told us some interesting stories of the war position in Jugoslavia.  They said that unless the Belgrade government allowed the Germans to move troops through the country Germany could never conquer them because the rugged country could never be crossed by tanks and as it is entirely agricultural there are no large towns so that the bombers would do little damage, added to which the Jugoslavs are a ruthless barbaric people who fight for the love of fighting rather than for patriotic reasons.  They are big men and use barbed bayonets – very interesting.

The camp was very quiet in the afternoon so a couple of other chaps and myself went for a walk without any definite destination – however by the aid of buses and the last stage by taxi we got to Tel Aviv, the most modern city of Palestine and in peacetime the scene of a lot of Jewish and Arabian squabbles.  The streets are reasonably wide and the buildings though of steel and concrete are built as one would expect in a Jewish community with an eye to cost rather than workmanship.  The finish leaves much to be desired – all the buildings whether business blocks, residential flats ro houses are severely modern – everything being on the straight line basis.  Hipped or gabled roofs are as rare as horses in the rural areas.

The shops, cafes and hotels were all closed because Saturday is the Jewish Sunday.  There are three Sundays in the week here – Friday is the Arab Sunday, saturday the Jews and Sunday the Christians which I imagine somewhat complicates international trading.  Bordering on Tel-Aviv is the ancient Arabian town of Jaffa and here business of all types was being negotiated.  It is a vey dirty place in striking contrast to the modern Jewish centre and reeks of the most unsavoury odours.

The Jewish people are dark haired and sallow skinned with the unmistakeable features of their race – some of the women are quite good lookers but they are all very stout and classified according to the number of axe handles across.  Very few of them speak or understand English or at least they don’t choose to understand it.

It was getting late buy the time we had walked around both places and as we did not relish the consequences of getting back to camp later than the battalion, began to look for a means of getting home and had ultimately to engage a taxi which cost all the mils of our three belts aggregated.  The taxi was driven by an Abyssinian who was accompanied by a Turk.  The taxi drivers drive like hell: they put their foot on the accelerator and trust to Allah.  Although the Battalion were home before us we were not missed.

After tea one of the chaps who had won a few bob at two up asked me to go with him to Reshon – a small Jewish town and we were presently on our way.  Reshon though only a small place houses a very important industry – The Palestine Brewers – makers of Eagle and Golden Star Beer. There are quite a number of good cafes where in addition to eating they serve all and every type of liquor including Youngers Scotch Ale. The middle of the floor is given up to dancing and going from one cafe to another we had a most enjoyable evening.

Sunday and most of Monday we spent in stunts in the sand which though solid were very interesting and enjoyable.  About three o’clock yesterday afternoon we went back to the camp and after a delightful shower, a dixie of stew and a couple of dog biscuits we embussed again for the home journey.  As it was still daylight we were able to see the country through which we passed.  Palestine is a very fertile country.  There are miles and miles of orange, grapefruit and lemon groves.  It looks as though the war must have disorganised the markets because the ground is literally a carpet of oranges and grapefruit.  I’ve eaten more citrus fruit in the last three weeks than in ay previous twelve months – I’d like to have forty or fifty acres of them in a position handy to Melbourne or Sydney.  One of the chaps took some snaps of us in an orange grove.  He’s away at a school now but when he comes back I’ll try and get some and send them to you.

John Smith came down to the tent to see me last Thursday night – I’d made several inquiries as to his whereabouts from the several hospital and medical units but was unable to locate him so you can imagine my surprise when he poked his head into the tent and told me he was at the CRS within the same camp area.  He looked well, but like most of the chaps who have been here for a long time, has seen enough of the Holy Land.  I’m going up when I finish this letter to try and see him.

And now Mother I’ll say goodbye for the present.  Best regards to the boys and love to you and dad.

PS  I had a letter from Shirley last week.  She said they have two feet of snow there but the weather here is perfect.

The confidence of the Jewish soldiers was clearly misplaced: the Germans and their allies invaded from all sides on April 11 and after a short campaign, had brought the country under the administration of a puppet government. 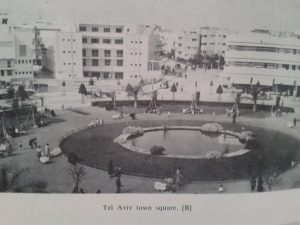 This was presumably Rishon-le-Zion, a  colony founded by Ukrainian Jews in 1882.  The settlers were supported financially by Baron Edmond James de Rothschild.  They  were very industrious, planting over a million vines as well as orchards of almonds, figs, pomegranate, apples and citrus, and 20,000 mulberry trees for silkworm culture.  There was (According to the Jewish Encyclopaedia) an enormous cellar with modern machinery producing wine and brandy.  Rishon-le-Zion is now Israel’s fourth largest city.

Stunts in the Sand

A Carpet of oranges and grapefruit 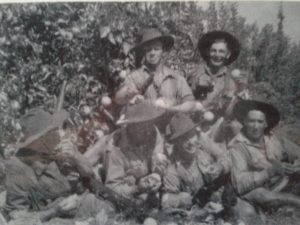 This entry was posted in escapades, relaxation, fun and games, Middle East, The course of the war, Uncategorized and tagged citrus groves, Jugoslavia, Rishon-le-Zion, Tel Aviv. Bookmark the permalink.