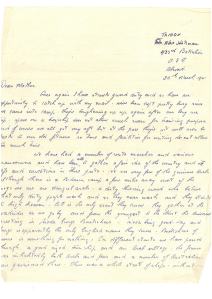 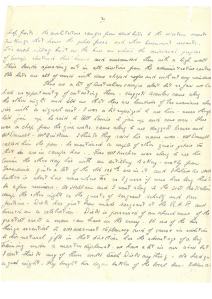 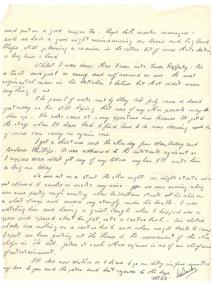 Once again I have struck guard duty and so have an opportunity to catch up with my mail.  We’ve been kept pretty busy since we came into camp.  They’re toughening us up again after our long sea trip – space on a troopship does not allow much room for training purposes and of course we all got very soft but at the pace they’ve set we’ll soon be back to our old fitness so time and facilities for writing do not allow too much time.

We have had a number of route marches and various manoeuvres and have been able to gather a fair idea of the country and life and conditions in there parts.  We see very few of the genuine Arabs although there is a Bedouin camp a few miles away most of the wogs we see are mongrel Arabs – a dirty thieving crowd who believe that only dirty people wash and so they never wash and they stink to high heaven- BO is the only scent they know.  They gather at the roadsides as we go by and from the youngest to the oldest the universal greeting is Sieda George Buckshees – Sieda being good-day and George is apparently the only English name they know.  Buckshees of course is something for nothing.

On different stunts we have passed through a good sized township and an Arab village.  The former was inhabited by both Arabs and Jews and a number of Australians are garrisoned there.  There was a whole street of shops – without any shop fronts.  The architecture ranges from mud huts to the western concrete buildings that house the police forces and other Government servants.  The Arab village is built on the lines on which the medieval peoples of Europe clustered their houses and surrounded then with a high wall, their lands spreading out in all directions from the administrative centre.  The huts are all of mud with dome shaped rooves and without any windows.

There are a lot of Australian camps about but so far we have had no opportunity of contacting them.  Nugget Scanlon came along the other night and told me that there are hundreds of Tasmanians about.  He’s with a signal unit.  I was a bit surprised to see him – never thought he’d join up – he said ‘Tell Laurie to join up and come over’.  There was a chap from the zinc works came along to see Nugget Geeves and McDonnell – McQuiltan I think they said his name was.  McDonnell called him the Pom.  He mentioned a couple of other Zincie jokers too that are in camps here.  Ron McKercher was along to see his cousin the other day.  He’s with an artillery battery – mostly from Tasmania – quite a lot of the old 106th are in it and I believe Ac Hallam’s brother is about here somewhere too so I guess if we’re here long there’ll be a few reunions.

Ac Hallam and I went along to the 31st Battalion camp the other night as the guests of Sergeant Schultz and Ken Jenkins.  Dick has just been made a sergeant at the RAP and turned on a celebration.  Dick is possessed of an abundance of the greatest asset a man can have in the army – it’s one of the two things essential to advancement – diplomacy – and of course in addition to his natural gifts in that direction had the advantage of a long raining under a master diplomat  We have a lot in our show but I don’t think any of them could teach Dick anything.  We had quite a good night.  They bought two dozen bottles of the local beer – Golden Star – and put on a good supper too – they’re both master scroungers – and we had a good night reminiscing on Aussie and England.  They’re still planning a reunion in the cellar but of course that’s looking a long time ahead.

Whilest I was down there I ran into Trevor Rafferty – he’s a Lieut and just as smug and self assured as ever – the most regimental man in his battalion I believe but that didn’t mean anything to me.

The parcel of socks sent by May last July came to hand yesterday so I’m still hoping that one of my other parcels may turn up.  The socks came at a very opportune time because I’d got to the stage when I’d have had to find time to do some darning but of course can carry on again now.

I got a Christmas card the other day from Max, Audrey and Barbara Phillips.  It was addressed to the antitank regiment so I suppose Max didn’t get any of my letters.  Anyhow I’ll write him a long one today.

We were out on a stunt the other night – on night stunts we’re not allowed to smoke or make any noise – we were moving along over some pretty rough country when Ac Hallam struck his shin on a short stump and cursed very strongly under his breath.  I was watching him and having a quiet laugh when I tripped over a spare and speared about ten feet into a cactus bush – An electric shock has nothing on a cactus bush and when we got back to camp I spent over an hour picking out the thorns to the amusement of the other chaps in the tent.  Jokes at each others expense is one of our chief sources of entertainment.

I’ll close now Mother as I have to go on duty in five minutes.  My love to you and the pater and best regards to the boys.

“A good sized township and an Arab village’

From the diary entries below, it seems the township was Gaza, but the village is not named. 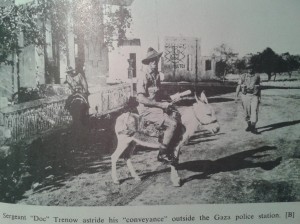 Village houses were presumably similar to those in the Frank Hurley photo : www.ww2australia.gov.au/damascus/images/hurley/011444_500.jpg

Prior to enlisting, Dad had been a member of the ‘Militia’ – specifically, the 106th Field Battery

Ac Ac duty – wonderful bludge – what a time the Ac Ac platoon must have had in England – wrote letters to youngster & May.  Went to bed early.

Bayonet drill.  Learning to salute again after more than twelve months in the army.  Lost a plug of tobacco at bayonet training.  Route march in the afternoon.  After tea Nuggett Scanlon came along from 9th Divvy sigs camped a bit further along road.  Didn’t know him at first – mentioned a hell of a lot of Tassies in camps near here – Went to pictures – “Man to Remember” – good show – gazette on Tobruk and return of Sydney – to Sydney – Naval organisation a thousand times better than Army.  Walking back met Tiny Schultz and Ken Jenkins done up to the nines – Tiny grown a moustache – looks ten years younger – has just been made a sergeant of RAP at 31st Battalion – master Diplomat.

Muster parade – collected washing and took to laundry – dearer than in England – marching and rifle drill practice in order for NCO’s.

Church Parade – Rained all day – camp nearly under water – stayed in tent played two-up and did the roll – then wrote letters – went to bed early.

PT Rifle drill.  Bayonet training – receive some anti tank mail written last May – one from May one from Youngster and Christmas card from Max Phillips.  Jack Reinke paraded to OC Hqr Coy and handed in stripes – wouldn’t be mucked about by mugs.  Everybody admired his action.  Stunt in evening – finding a spot by compass – exercise mainly for officers – rough going across heavy country – no lights and no noise.  Ac Hallam hit shin on stump – laughing at him I tripped over stump and speared into cactus bush – like an electric shock.  back to camp about 10.30.  Quite an enjoyable evening.  supper then to bed.

PT & Rifle drill.  went to pictures in evening – Wuthering Heights – had already seen it twice but it was worth seeing again.

PT and stunt in morning – marched past arab village – all mud huts with dome shaped rooves surrounded by mud wall.  Received parcel of socks sent by May last July – looks hopeful for other parcels.  Mounted three day guard duty at Hospital – Ac Ac wonderful bludge – 2 hrs on and ten off – there must be a catch in it somewhere.  Went to pictures in the evening – Strange Cargo.

3-5 shift in morning – pinched some wood from contractors yards and lit a fire in pit – wrote letters – Ceremonial parade in afternoon.  Jim Hocking & I struck lucky – were on duty.  Pictures in evening – “Men without souls”

Again, correspondents and parcels that had been given up on, turn up…the socks after 10 months!  It would be hard to keep writing to people (like the Phillips family) when you had received nothing from them for so long, because they had the wrong unit name….must have been such a relief to finally receive a letter.

Dad always envied people who had the ‘gift of the gab’/ability to ‘gild the lily’, as his own tendency was towards plainly speaking his mind.

I’m intrigued at the comment about Jack Reinke – Jack Reinke paraded to OC Hqr Coy and handed in stripes – wouldn’t be mucked about by mugs.  Everybody admired his action.  Dick Lewis said he doesn’t remember this story – and Dad doesn’t mention it in any surviving letters, but I’m sure it must have featured somewhere!

(‘Zincie jokers’ would have been men who worked there)

As children we were told that our grandfather had been involved in building the Zinc Works, and had worked there.  As he took no part in World War I after being ‘invalided home’ from Gallipoli, this could well be true.  The Electrolytic Zinc company was one of a number that were attracted to Tasmania due to its cheap hydro electric power and deep water ports.   See Alison Alexander’s article –

The photo from the article is from the later 1960’s (the Tasman Bridge in the background was opened in 1965) – according to the author, the Risdon plant was by then the second largest manufacturer of Zinc in the world.