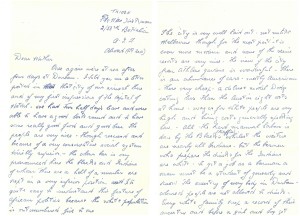 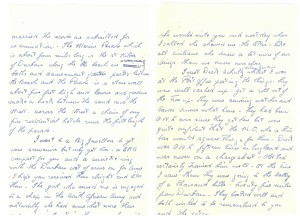 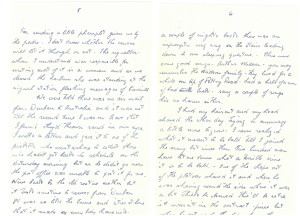 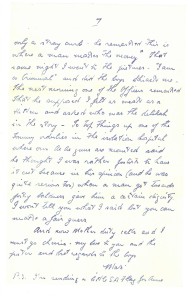 Once again we’re at sea after four days at Durban.  I told you in a letter posted in that city of our arrival there and of my first impressions of the capital of Natal – we had two half days’ leave and were able to have a good look round and to have some really good food and good beer.  The people are very nice – though reserved and because of a very conservative social system terribly superior – the colour ban is very pronounced here the blacks and Indians of whom there are a hell of a number are kept in a very inferior position.  It’s quite easy to understand this feature of African politics because the white population is outnumbered five to one.

The city is very well laid out – not unlike Melbourne though for the most part it is even more modern and some of the scenic resorts are very nice – the view of the city from Athlone Gardens is wonderful.  There is an abundance of cars – mostly American – they’re very cheap – a deluxe model Dodge costing less than the Austin eight costs at home – wages for white people are very high and living costs generally speaking low.  All the hard manual labour is done by the blacks (Kaffirs) whilst the waiters are nearly all Indians – but the barmen who prepare the drinks for the Indians are white.  To get a job as a barman a man must be a student of genealogy and know the ancestry of everybody in Durban – coloured people are not allowed to drink. Every white family keeps a record of their ancestry and before a girl and boy get married the records are submitted for examination.  The Marine Parade which is about four miles long is the St Kilda of Durban – along the beach are swimming baths and amusement parks – between the Beach and the Parade is a stone wall about five feet high and lawns and gardens make a break between the sand and the street – across the street a chain of very fine residential hotels runs the full length of the parade.

I went to a big jewellers to get some souvenirs but only got two – a little compact for you and a serviette ring with the Durban coat of arms on for Anne – I hope you received them alright and like them.  The girl who served me is engaged to a chap in the South African Army and naturally she had somewhat more than a passing interest in the war – she said she would write you and next day when I called she showed me the letter – like all civilians she knew a lot more of our doings than we know ourselves.

I met Dick Schultz and Ken Jenkins whilst I was at the Post Office posting the things.  They were well cashed up – got a roll out of two up – they were sending watches and Gawd knows what home – they had been AWL ever since they got here but were quite confident that the MO who is their boss would square things for them.  Dick was AWL fifteen times in England and was never on a charge sheet – Old Ted certainly trained him well – at the time I saw them they were going to the Valley of a thousand hills – twenty five miles from Durban.  They looked well and both wished to be remembered to you and the pater.

I’m sending a little pamphlet given us by the padre.  I don’t know whether the censor will let it through or not.  The signaller  whom I understand is responsible for writing most of it is a woman and as we cleared the harbour she was standing at the signal station flashing messages of Goodwill.

We were told there was no airmail from Durban to Australia and it was not till the second time I was on leave that I found they’d thrown sand in our eyes.  I wrote a letter and gave it to one of the pickets who went ashore to collect those who hadn’t got back to schedule on the Saturday morning but as he didn’t go near the post office was unable to post it for me.  We’re back to the old routine mother but it took some time to recover from Durban.  It was so like the towns and cities at home that it made everybody homesick.

A couple of nights back there was an impromptu sing song on the stairs leading down to our sleeping quarters.  There were some good songs.  Arthur Midson – you may remember the Midson family – they lived for awhile on top of Pottery Road – had a hell of a run of bad luck – sang a couple of songs he’s no harm (?) either.

I had my hair cut and my head shaved the other day trying to encourage a little more to grow – I never realised what it meant to be bald till I joined the army but since then five hundred men have let me know what a terrible crime it is to be bald.  One of the chaps out of the platoon shaved it and when he was shaving round the sides where it was a bit thick he observed – this’ll be extra it wasn’t in the contract price – but when he got up to the top where there was only a stray curl he remarked “this is where a man makes the money”.  That same night I went to the pictures – “I am a Criminal” – and did the boys shiack me.  The next morning one of the officers remarked that he supposed I felt as weak as a kitten and asked who was the delilah in the story.  To top things up one of the Tommy orderlies in the isolation hospital where our Ac Ac guns are mounted said he thought I was rather foolish to have it cut because in his opinion (and he was quite serious too) when a man got towards forty baldness gave him a certain dignity.  I won’t tell you what I said but you can make a fair guess.

And now Mother duty calls and I must go.  Cheerio – my love to you and the pater and best regards to the boys.

The pamphlet mentioned is a collection of verses written by a woman who lost the love of her life in World War I.  I will share the whole pamphlet in my next post.  The signaller’s name was Miss Ethel Campbell – See photo below of the greeting she received when she visited Australia in 1923.  ABC local radio in Albany WA did a story on her last year : 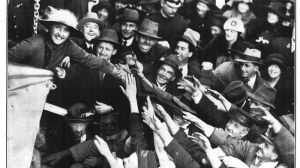