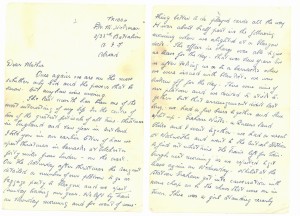 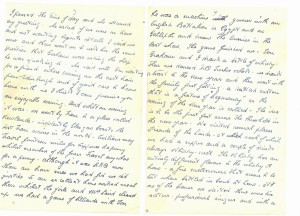 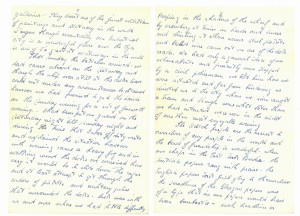 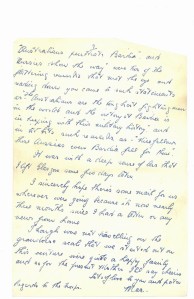 Once again we are on the move whither only God and the powers that be know – but anyhow we’re moving.

The last month has been one of the most interesting of my life.  In the centre of two of the greatest festivals of all time – Christmas in England and New Year in Scotland.  I told you in an earlier letter of how we spent Christmas in barracks at Colchester forty miles from London – on the coast.  On the Saturday after Christmas the sergeant detailed a number of our platoon to go as baggage party to Glasgow and we spent Sunday loading our gear.  We left by train on Monday morning and for want of something better to do played cards all the way.

It was about half past six the following morning when we alighted at a Glasgow dock. The officer in charge was able to give us leave for the day.  That was New Year’s Eve so after taking us to a barracks where we were issued with blankets we were broken off for the day.  There were nine of our platoon and we decided to stick together but that arrangement didn’t last long.  We had a few beers together and then split up – Graham Watts – a Queensland bloke – and I went together.  We had a meal at Woolworths and went to the Central Station to find out what time trains left for Edinburgh next morning as we expected to get leave again on Wednesday.

Whilest at the station Graham got into conversation with some chap as to the shows that were on in town.  There was a girl standing nearby.  I passed the time of day and she returned my greeting.  She asked if we were on leave and not wanting to go into details I said we were and then went on to ask her the same question that Graham was asking the chap he was speaking to.  She said well I’m waiting for a friend whose coming on the next train from Edinburgh and if you’d care to come home with us I think I can promise you an enjoyable evening.  And what an evening it was.  We went by tram to a place called Newlands – incidentally Glasgow boasts the best tram service in the world – civilians may travel fourteen miles for tuppence ha’penny whilst members of the forces travel anywhere for a penny.

Although it was little more than an hour since we had fed we did justice to an excellent home cooked meal then whilst the girls and Mrs Laird cleared up we had a game of billiards with Tom.  He was a machine gunner with an English Battalion in Egypt and on Gallipoli and knew the Aussies in the last show.  The game finished, Tom, Graham and I drank a bottle of whisky then we danced till twelve o’clock and then went with the family first footing – a Scottish custom that is a feature of ‘Hogmanay’ as the coming of the New Year is called.  The idea is to be the first foot across the threshold in the New Year.  We visited several places – friends of the Lairds – at each of which we had a supper and a couple of drinks – always whisky – neat.  The Whisky has an entirely different flavour to the whisky at home.  At one of the homes we visited there were two sisters and with a piano playing they treated us to some really good singing.

It was half past six the following morning when we arrived back at barracks.  We had a clean up, saw the officer who gave us leave for the day and set out for Edinburgh.  We were not disposed to shave ourselves so went to a barber – like everybody else in Scotland he was suffering from the effects of an all night celebration – before shaving us he gave us each a glass of Whisky and then a glass of beer as a chaser and as our shave only cost 3d we got good value for our money.  Whatever other celebrations I have the fortune to attend I’ll never forget Hogmanay – most people were just arriving home or making their way home when we reached the station.  There was a heavy snowfall on New Year’s Day and in Edinburgh gangs of workmen were kept busy cleaning the snow from the tramlines.

Both Thursday evening and Friday evening we spent with the Lairds – the most charmingly hospitable family I’ve ever met.  There was Tom (the husband), Mrs Laird who comes from the far north and three daughters – Billie the eldest is I think the prettiest girl I ever saw.  Before leaving them on Wednesday morning we suggested taking them to a show and when we arrived on Thursday night they were all set to go but we were broke – the officer had told us that if we had any credit in our paybooks we could draw it on the Friday so I took Tom aside and explained the situation to him and without a question he gave me a pound and when I gave it back on the Friday he didn’t want to take it.

On the Friday afternoon we saw the most colourful pantomime imaginable.  I always thought pantomimes were for kids but almost the entire audience were adults.  On another day we went to the Art galleries.  They boast one of the finest collections of paintings and statuary in the world.  Glasgow though essentially an industrial city is a wonderful place and the Clyde is one of the greatest waterways in the world.

That Sunday the Battalion arrived.  We had come aboard on the Saturday and though the ship was still at the docks leave could not under any circumstances be obtained however we had promised to go back to the Lairds on the Sunday evening for a sort of farewell evening.  I had been put on guard on the Saturday night till Sunday night and during the time that I was off duty wrote and explained the situation however with evening came a heavy fog and in walking round the decks we conceived how easy it would be to slide down the ropes and at least attempt to get through the cordon of pickets and military police that surrounded the docks.

Luck was with us and once ashore we had little difficulty keeping in the shadows of the wharf and by crawling at times on hands and knees and climbing at others across steel pickets and barbed wire came out on one of the dock roads.  We had only a general idea of our whereabouts and presently were stopped by a civil policeman.  We told him how we were situated and far from hindering us he directed us to the city where we soon caught a tram and though somewhat later than we had intended were soon in the midst of another most enjoyable evening.

The Scotch people are the nearest to ourselves of any people int he world and the bond of friendship is wonderful – when our chaps in the East took Bardia the Scottish papers rang with praise.  The English papers took full glory to themselves.  The headlines of the Glasgow papers were of a type that in our papers would have been bombastic – such headlines as “Australians penetrate Bardia” and “Aussies show the way” were two of the flattering remarks that met the eye and reading down you came to such statements as “The Australians are the toughest fighting men in the world and the victory at Bardia is in keeping with their military history” and in titbits such remarks as – “Nice fellows these Aussies – even Bardia fell for them”.

It was with a deep sense of loss that I left Glasgow some few days later.

I sincerely hope there’s some mail for us wherever we’re going because it’s now nearly three months since I had a letter or any news from home. **

Though we’re not travelling on the grandiose scale that we started out on this venture we’re quite a happy family and so for the present Mother I’ll say cheerio.

Lots of love to you and the pater.  Regards to the troops.

Dad’s Christmas letter is not in my collection, but there is a description of the Christmas dinner mentioned in a later letter. However I do have a Christmas card sent from Scotland: 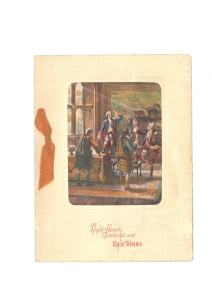 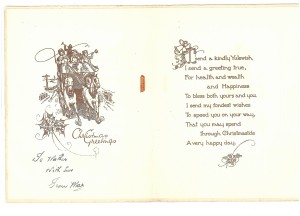 Once again, Dad speaks of it being months since he had any news from home, but his letter of Dec 8 he mentions receiving letters from his mother – admittedly written in September – so maybe this is what he means by the three months mentioned (i.e. that the latest news he had received was from 3 months ago).  On 16th Dec he says his last letter from Youngster was on October 24th – and again, it’s not clear if this is the date of the letter (more likely) or the date of receipt.

On November 17 he says An old letter of May’s written on the 29th of May turned up last week. So again, he might mean – no recent news, rather than no recent letters.

The diary entry below speaks of drinking a bottle of Black & White (it sounds as though he was the only one drinking – but maybe not), and the letter above of three men consuming a bottle of whisky between them.  This seems an awful lot to me…especially as there was a lot more alcohol consumed on New Year’s Eve!

In packing to move house, I have uncovered one of Dad’s wartime diaries.  It is a memo book and covers the period from December 31 1940 – July 16 1941.  For December 31 and the first part of January entries are as follows:

One minute past twelve went first footing – hell of a good night.  Whisky, Beer – fatted calf.  Back to Barracks – had a clean up – went to Edinburgh – North British Hotel – Daisy Aird – Snow storm – back to barracks 1am.

drank some beer.  lunch at YMCA met sailor from Empress of Britain – Head bandage and leg in a mess – told us the story of the sinking – Bombed with HE  (?) then with incendiaries then torpedoed by submarine – Went to Lairds in afternoon – went to a show in the evening

Went to pantomime with Wattsie Billie & Margaret…. colourful show – tea and ….at Lairds (Mrs Soldier…cabbage – leaves a ….wherever he goes)

Guard all day – dismissed 5pm.  Battalion came on board went AWL that night – went out to Lairds – once clear of ship kept in shadows of Railway trucks – crawled through barbed wire – round docks – directed by civvy police – Had a couple of drinks at a big hotel – Adelphi – and went out to Newlands again.  Farewell evening.

Shifted out of cabin to make room for postal staff.  Loaded mags for Bren – Tucker light on – sleep on floor.

Route march in afternoon – round Glasgow along Great Western Road.  sleep on floor

sick parade – temp 102 Tugs took ship into stream – down the Clyde – passed big dockyards to Greenock.  Hills very bare and barren in contrast to when we came in in June ’40.