Visit to the dentist, then two days’ pay for one feed 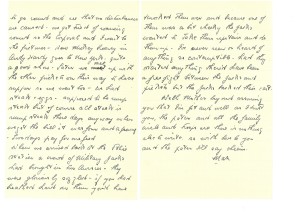 I have just come back from the Dentist – a cheerful subject to start a letter however such is the condition of news – decidedly light on.  There’s no doubt about English army dentists – he took one tooth out, drilled and filled two and polished my teeth in twenty minutes – when he put the drill to work I thought I’d struck a navy (?) drilling stone but it was only a matter of seconds and it was over – the rest of the job was easy – I didn’t know he’d pulled the tooth out.

It seems ages since I had a letter from home – the last one was from youngster and that’s five weeks ago.  Still none of the chaps are getting Aussie mail except airmail so I can’t complain.

I went to a seaside resort yesterday afternoon – some of our chaps had been there on Saturday afternoon on picket duty and they boosted it up so much that Ted Fleming and I decided to look the place over.  It was Sunday and we had leave from two o’clock so we caught a bus.  The place we went to was quite a big township but except for troops it was practically deserted.  There were at least sixty big hotels to let on the waterfront – all the swimming pools were empty because of the cold weather but apart from that it was a deserted city and we were glad to get a bus back to barracks.

I haven’t heard from Jack or Max Phillips – I had two letters from Jack early but I haven’t had any at all from Max and until I do I’m not going to write him again.  I suppose you haven’t heard anything from Brian at all.

In the hope of finding some more writing matter I’ve just read through all my letters from home – your letters, May’s letters, youngster’s letters, Jack’s and Mae Menzie’s but I’m afraid there’s still nothing that I haven’t already written – news is so scarce – that is news we’re allowed to write – that most of the chaps only send cards now.

When I was on guard the other day Dick [Schultz] went past with the Medical Officer of his battalion – there’s no doubt about that fellow he’d talk his way in anywhere – he’s as fat as a seal.  I’ve never seen him look as well – he spends most of his time riding around in cars – he goes everywhere and sees everything there is to see – but there’s no doubt about Dick he’s a fine fellow.  Ken Jenkins is the most homesick man in England – he’s changed remarkably.

I was on Town picket the other day – Saturday – the idea being to go round and see that no disturbances are caused – we got tired of roaming round so the Corporal and I went to the pictures – saw Mickey Rooney in Andy Hardy Goes to New York – quite a good show.  Later we met up with the other pickets on their way to have supper so we went too – we had steak & eggs – supposed to be rump steak but of course all steak is rump steak these days.  Anyway when we got the bill it was four and a penny – two days’ pay for one feed.

When we arrived back at the Police Station a crowd of Military Jacks had brought in two Aussies – they were gloriously sozzled – if you had breathed hard on them you’d have knocked them over and because one of them was a bit cheeky the Jacks wanted to take them upstairs and do them up – I’ve never seen or heard of anything so contemptible.  Had they started anything there’d have been a free fight between the Jacks and pickets but the jacks backed their cart.

Well Mother beyond assuring you that I’m fit and well as I trust you, the pater and all the family circle and troops are, there is nothing else to write so with love to you and the pater I’ll say cheerio.