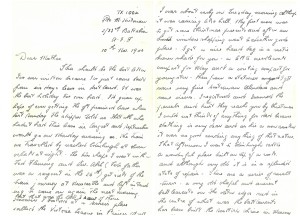 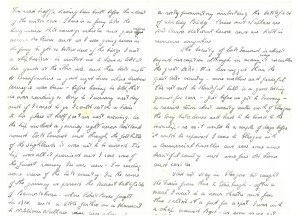 This should be the best letter I’ve ever written because I’ve just come back from six days’ leave in Scotland.  It was the best holiday I’ve ever had.  I’d given up hope of ever getting the oft promised leave when last Sunday the skipper told us that all who hadn’t had their leave in August and September would go on Monday morning.  The train we travelled by reached Edinburgh at eleven o’clock at night.  The two chaps I went with – Ted Fleming and Viv Abel (Ted’s father was a sergeant in the 26th) got sick of the train journey at Newcastle and left intending to come on again the next morning but that was the last I saw of them.

However I booked at a Services place called the Victoria League in Princes Street.  I was about early on Tuesday morning although it was raining like hell.  My first move was to get some Christmas presents and after an hour’s window shopping went to a leather goods place.  I got a nice hand bag in a rustic brown shade for you, a little needlework compact for May and a writing compact for youngster, then from a stationer I got some very fine Scotsman calendars and some views.  I registered and insured the parcels and trust they reach you by Christmas.  I could not think of anything for dad because clothing is very dear and as he’s a non smoker it was not good sending anything of that nature.

That afternoon I went to Edinburgh Castle a wonderful place built on top of a rock and although very old it is in a splendid state of repair.  There are a series of small towers, a very old chapel and ancient battlements on the outer edges and in the centre of what was the battlements has been built the Scottish Shrine in memory of the Scottish soldiers who died in the last war.  Though not as big as the Melbourne shrine it is wonderfully conceived and magnificently built.  Within the hall carved in granite are the battle honours of all the Scottish regiments.  Around the walls is the most artistically carved tympanum I’ve ever seen.  Every branch of the forces is represented – all the faces brilliantly portrayed – the bronze figures almost walk off the wall.  Suspended from the ceiling is the figure of St Michael- the patron saint of soldiers.  The colours, books (?) and stained glass windows have been put away for safety during the war.

The Argyle Tower of the castle commands an excellent view of old and new Edinburgh.  The line marking the junction of the old and the new is the railway built on the reclaimed land of what was the Nor Loch.  The charm and beauty of the modern city with its wide streets and footpaths blends in perfect harmony with the ancient city’s time honoured buildings and historical interest.  The new Edinburgh is a beautiful city and has some fine statuary and buildings and numbers parks and gardens.

On Tuesday night I was invited to an evening at a private home in one of the residential suburbs.  It was a fine place – there was a Canadian, a Newfoundlander, two Australian sailors and myself and we had a really good evening.  The owner evidently a very wealthy man named Cousins (they have two cars a Rolls Royce and a Daimler) – turned on some good beer.  Scottish beer is like Cascade when fresh and raw off the wood and although I very seldom drink English beer I thoroughly enjoyed that Tenants Ale.  It’s a beautiful golden brown and sparkled in the crystal glasses like champagne.

On Thursday morning I went to see the Bridge over the Firth of Forth – a magnificent structure and a masterpiece of engineering, though it only carries double track railway lines and makes no provision for road traffic having been built before the advent of the motor car.  There is a ferry like the Lurgurena that conveys vehicles and passengers across the river and as I was going across in the ferry to get a better view of the bridge I met a ship breaker.  He invited me to have a look at his yards on the other side and then took me to Dunfermline a good sized town where Andrew Carnegie was born.  Before leaving he told me that he was sending a lorry to Inverary next day and if I cared to go I could catch a train to his place at half past six next morning.  As the trip involved a journey right across Scotland round Loch Lomond and through the foothills of the Highlands it was not to be missed.  The trip was all it promised and I saw some of the finest scenery I’ve ever seen – I’m sending some views of the Loch country.  In the course of the journey we passed the ancient battlefields of Bannockburn where Robert Bruce fought in 1314 and a little partner on a monument to William Wallace rises sheer from a rocky promontory overlooking the battlefield of Stirling Bridge.  Bruce and Wallace are Scotland’s national heroes and are held in reverence everywhere.

The beauty of Loch Lomond is almost beyond description although in many ways it resembles the Great Lake.  It is less rugged than the Great Lake country – more mellow and peaceful.  The rest and be thankful hill is a good testing ground for cars.  Just before we got to Inverary – a seaside town about seventy miles north of Glasgow – the lorry broke down and had to be towed to the township – so as it would be a couple of days before it could be repaired I came to Glasgow with a commercial traveller and saw some more beautiful country and some fine old homes and castles.

I did not stay in Glasgow but caught the train from there to Edinburgh – after a meal I went to a news theatre and from there I called at a pub for a spot.  I was with a chap named Boyd – as soon as we got in the bar we were invited to have a drink by a chap who turned out to be the skipper of a merchant ship trading to Australia.  With him was a doctor and a naval officer and we spent a good couple of hours in time honoured manner.

The people in Scotland are wonderfully hospitable and although the city is full of troops of many nationalities everybody wanted to make our stay enjoyable and I was very sorry when I had to catch the train back to camp.

Well mother I trust this letter will be as pleasant to read as the experiences mentioned were and now with love to you and dad and regards to the troops I’ll say cheerio.

The Shrine at Edinburgh Castle 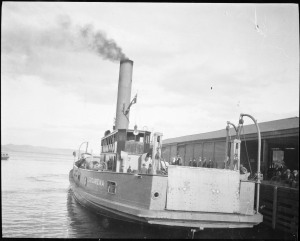