You blokes were only soldiers….letter to ‘Bert’ 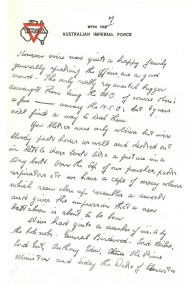 Just a line from Blighty to let you know we’re still afloat.

We had a great trip over on the Old Mary – she’s a wonderful ship but an awkward big bastard.  She was too big to take into the ports so we couldn’t get any leave and she had too many passages and stairs – everywhere you went was a route march.  It’s beautifully fitted up especially the suites on the top decks used by the officers and army sisters and the swimming pools were the last word.  Whilest at sea I had a dip every day.

The smoke room at night time was like the bar of a mining town pub.  The clinking of beer pots, the clouds of smoke and the babble of a thousand voices – the Two up schools – the crown and anchor boards and the poker tables presented a sight that would bring back memories to old soldiers.  From all corners you would hear – any part of a quid he finds em – fair go spinner and those other familiar expressions.  There’s no doubt about Two up – it’s a national institution.  One Sunday morning there was a voluntary church parade on the Promenade Deck and while the old padre was saying his piece, from the main deck immediately below him came that familiar cry – ‘Two bob he heads em’.

Since our arrival here there’s been a hell of a lot of mucking about – as a result we were split up into new units – Cecil Schultz is in the 70th Battalion – he’s got quite a good job in the RAP and expects to get a couple of stripes – in fact he might have them now.

The old dart’s not what it used to be – beer’s a deemer a pot, cigarettes 1d each and matches 3d a box – all out of two bob a day.  Payday is every other Thursday that means for twelve days in every fortnight we’re broke.

About two months ago we got thirty six hours’ London leave and we were having such a hell of a good time that we took an extra day.  When we got back to camp we were paraded to the orderly room – in time honoured style and there remanded to the Colonel.  I was fined two pounds 5/6 and seven days CB [Confined to Barracks].  I told Jim McDonnell how I’d fared and suggested that he day he’s been out of London and missed the train.  Buggered if they didn’t swallow the story and dismissed the case.

I’ve only had one really good night out since we’ve been here.  Claude Hill another Tassie and myself left camp meaning to walk to a village about three miles from camp.  We’d gone about half way when we were picked up by a car.  The driver was looking for a place with the same name as the one we were going to.  When we arrived there he found out it was the right name but the wrong village so we went with him to the other village somewhat farther away.  Here we left him and went into a pub.  It had evidently not been visited by Australians before because there was quite a crowd there and for the first time since we came here the bar shouted – not once but several times – and several of the people there also shouted and at half past ten when they closed up we were both very happy.

When travelling in the car we hadn’t noticed the distance but the long stagger home made us very familiar with the journey.  It is actually nine miles but I guess we staggered fifteen miles.  It was about half past two when we hit the hay and a few minutes afterwards reveille called us back to the parade ground still dressed as we were when we went out.  It took half a dozen a pros to square me up, but we managed to weather the day.

The early days of this battalion were rather humorous.  It’s made up of odds and sods from all units and the Colonel and his staff were kept busy dealing with offenders against the law.  In the first month or so, fines collected daily – or at least I should say imposed daily because they took weeks to pay – rivalled the collections of the Hobart Traffic Court when Wilfred Hutchins was in his heyday.  On Sundays after church parade the Colonel would give us what he very rightly called the ‘highlights of the week’.  On such occasions his voice would assume the fatherly tone of a disillusioned sky pilot whose efforts to convert his flock have been unavailing.

One Sunday he began by chastising Smiths Weekly for putting bad ideas into our heads by presenting the old AIF as wild men instead of which he said they were men incapable of doing anything wrong – to which the boys all said (under their breaths) ‘it sounds like bullshit to me’.  He then went on to recount our crimes which apart from the great source of revenue – AWL’s – included the stealing of a pig and an organised raid on a pub cellar.

However we’re quite a happy family generally speaking the officers are a good crowd – the only really regimental bugger being the MO.  Of course there’s a few _____ among the NCO’s but I guess we’ll find a way to deal with them.

You blokes were only soldiers but we’re bloody packhorses as well and decked out in battle dress look like a picture in a story book.  Over the top of our pouches, packs, respirators, etc we have a cape of many colours which seen close up resembles a smock and gives the impression that a new battalion is about to be born.

We’ve had quite a number of visits by the hob nobs – General Birdwood, Lord Milne, Lord Gort (?), Anthony Eden, the Prime Minister and today the Duke of Gloucester.

This is the only letter in the collection that was written to ‘Bert’.  It’s clear he was an older man – presumably a veteran of WWI.  The only relative I can find with a name approximating ‘Bert’ is his uncle Robert – but he was known as Bob.  Bob Hickman is described in Robert Kellett’s book about the Hickman family (The Descendants of Richard and Phyllis Hickman, 2002) as ‘a rather shy gentleman’ who purchased the Hickman home ‘Normanville’ from his uncle Richard’s estate and later moved to a property in Florence St Moonah where he conducted a very successful orcharding business until his death in 1960, aged 89.

Leave during transit on the Queen Mary

Dad reports they were not able to take any shore leave.  According to the account in The Footsoldiers (p6), this was true for Fremantle – when the inability of the ship to dock had ’caused the troops aboard her to be the only ones not to get a last leave in Australia.  This had created some ugly scenes on board’ – but not for Capetown where shore leave was ‘gained precariously by those on board the Queen Mary…There was a tremendous swell …and troops had to jump – singly – on to weaving and bobbing tugs.  But it was accomplished.’  Presumably, Dad didn’t fancy taking that leap of faith!

The journey to the village pub

It’s a mystery to me why, in the letter to his mother about the same event, he said the car was driven by a woman – but on this occasion, it’s a man.

Dad says the early days of the battalion were ‘rather humourous’.    The Footsoldiers account (p8) describes those early days thus:

Although most of the officers and NCO’s of the 17th and 19th Brigade reinforcements had been transferred with the groups, virtually no NCO’s had been transferred front he support and technical units, and, until some equipment was forthcoming not a great deal of worthwhile training could be done.  All the men could march, salute, carry out rifle drill after a fashion, but the specialist drills and minor tactics of the platoons of an infantry battalion had yet to be learned. But with a lamentable lack of equipment and too few NCO instructors, the immediate road ahead appeared a bit rugged.

Later, describing the first CO’s shield (shared in the previous post on this blog), author Bill Crooks again makes reference to the difficulties of those early days:

The ‘Dill Battalion’ appearing on the crest is a point appreciated by those who knew the unit in its infancy, when the troops – all from the 6th Division AASC [Australian Army Service Corps], Ammunition Sub-Park, 2/3rd Field Regiment, 2/1st Anti-Tank Regiment, and others – were struggling gallantly to master the intricacies of the PBI [Poor Bloody Infantry] weapons.       (The Footsoldiers p 443)

This entry was posted in at sea, Britain, escapades, relaxation, fun and games, Letters to/ from others, pay and conditions, Uncategorized and tagged Dick Schultz, Jim McDonnell. Bookmark the permalink.