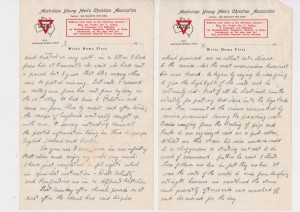 I received my first Australian mail yesterday and today.  Yesterday I had a letter from youngster written from Sydney on the 6th June and today I got your letter written on 10th June and one from Mrs Toomey.  I was very pleased to get your letter and am most surprized that you haven’t received any of mine because I wrote you from Fremantle, Cape Town and Freetown and have written every week since we got here.  I also sent a cablegram from Cape Town per medium of one of the officers – that should have reached home late in May and a Mothers Day cablegram from Fremantle.

There is perhaps some excuse for us not getting our mail because of the reorganization of the Forces but there surely isn’t any reason for our mail not getting home – some of the letters you would have enjoyed very much.  From now on I will number my letters and if you do so too we will know which go astray.   I sent you a cablegram on your birthday.  I hope it arrived alright also some packets of snaps.  I’m sorry to hear of Old Len passing on but life didn’t mean much to him in his last years.  Mrs Len will have a still greater burden to carry now but I guess she’ll carry on.

The youngster seemed hale and hearty and to all intents and purposes was feeling the benefit of her treatment.

Mrs Toomey told me in her letter that she’d had a letter from you – she’s a good sort and treated us very well – in a letter I had from her at Fremantle she said she had sent a parcel but I guess that like many others can be posted missing.  Last week I received a cablegram from her sent from Sydney on the 18th May.  It had been to Palestine and came on from there by mail and after touring the camps of England eventually caught up with me.  It is a very interesting document the postal information being in three languages – English, Hebrew and Arabic.

As you see I am now in an infantry Battalion and enjoy my work very much.  I have just completed a fortnight’s school in specialist instruction.  Dick Schultz and Ken Jenkins are in a different Battalion.

Last Sunday after church parade or at least after the Colonel had said his piece which provided and excellent anticlimax to the service – he’s the most unconscious humorist I’ve ever heard – he began by saying he was going to give the highlights of the week and he certainly did.  First of all he chastised Smith’s Weekly for putting bad ideas into the boys’ heads and then recounted the crimes committed by various personnel during the preceding week.  Crimes ranging from the stealing of pigs and fowls to an organised raid on a pub cellar.  Whilest on this strain his voice would do credit to a clergyman a striking contrast to his word of command – further he said I think those fellows are low in fact they are low.  It was the work of the world to keep from laughing  outright however we weathered the storm and presently afterwards were marched off and dismissed for the day.

I went to the camp where Dick and Ken are stationed.  They’ve both got good jobs in the RAP – Dick is Battalion masseur and Ken an MO’s assistant.

Dick had just returned to camp – he went on leave on Saturday and was due back to camp at ten that night but went with another chap (whose birthday it was) to a town that’s out of bounds at present and got gloriously sizzled – at eleven o’clock he reported to the police that he’d been to a town near camp and had caught the wrong bus.  The Police took them to a military barracks where they were given a bed, a good breakfast, and a rail pass back to camp in addition a letter to the Colonel explaining the circumstances – That’s about the best I’ve ever heard – instead of being fined two pounds and seven days they got bed, breakfast and free transport.  Dick’s looking particularly fit and asked to be remembered to you and the pater.  Ken was away at the time so I didn’t see him however I had tea with Dick and Dudley Raynor, played a few games of crib and returned to camp.

One night last week I had leave till midnight and went with Claude Hill to a small village about three miles from camp.  Just before reaching our destination we were picked up by a lady in a car and she took us to a village of the same name but considerably further away.  Claude had the price of a couple of drinks – I was broke, still paying off a fine incurred for overstaying my London leave – so we went into the local pub.  It was a tumbledown shanty but there was a congenial crowd there of country folk just like a gathering of the clan in the cellars at home on Sunday, and for the first time since we arrived here the crowd shouted not once but several times with the result that we got quite merry but the long walk home somewhat dampened our enthusiasm – It must have been the best part of ten miles.

Well mother there isn’t much more I can write at the moment but I would like you to let me know which letters you did get.  I almost said which ones you didn’t get – and then I may be able to retell from my diary some of the news that missed out.

My love to May and Anne and more particularly to yourself.  Best regards to the Pater – whom I trust is well and to Laurie and Mr and Mrs Phillips.  Remember me to the boys.  Love  – Max

‘The youngster’ was Dad’s younger sister Ivy Drysdale.  She was an accountant who lived on the mainland – in Sydney then in Melbourne.  Her husband Bill was a navy officer.

May was his older sister who like his parents lived in Lenah Valley – probably also in Pottery Road.  While I was growing up, we lived at no. 21 and Auntie May and her family lived at no. 23 – but I don’t believe either of these houses was built until after the war. May was married to Laurie and Anne was her daughter.

‘The boys’ who are usually mentioned at the end of dad’s letters, were the family dogs.

‘Old Len’ was one of Dad’s great uncles – one of his father’s many brothers.  My grandpop  (‘the pater’) was one of 14 children, 12 of whom reached adulthood – 10 men and 2 women.  Six of dad’s great uncles and both great aunts were alive at the start of the war.  Old Len and his wife Elizabeth (‘Mrs Len’) lived on a property called Lenfern in Lenah Valley Road.  According to Hickman descendant Robert Kellett (in The Descendants of Richard and Phyllis Hickman, 2002) Len passed away suddenly at home whilst sitting at the table.  ‘Mrs Len’ was known as a very hard working lady who worked in their extensive orchard, raised pigs and made many varieties of wine.

Crimes, ranging from the stealing of pigs….

As the War progressed, members of the Battalion created an heraldic shield for each of its Commanding Officers.  The first of these – Lt-Col R W Bierworth’s shield – depicts in one quarter ‘the stolen pig’ whose story is recounted in The Footsoldiers (p443):

The stolen pig records the exploit of one Private Denton (thereafter known as ‘Piggy’).  On a particularly black night in England this character decided to eke out the meat ration by bayonetting a young pig and lugging ti home to camp in his universal kit-bag – this at a time when near was severely rationed in England and the farmer was not permitted to kill any pigs himself without Government authority!  Unfortunately for the pig-snatcher, her was passed en route (complete with pig) by one Alfie Buttrose, then commanding C company.  The shrewd Alfie found the RSM doing the rounds of the guard on reaching camp and promptly passed the buck to him.  The sequel may have been more drastic for the pork-lover had not the Officer’s Mess (including the CO) enjoyed fried pork chops next morning, unaware of the source of supply. The rest of the pig?  Ask the ‘Snake Pit’! 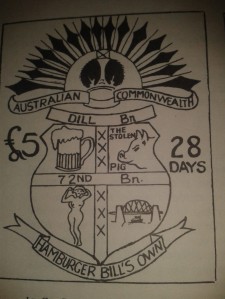